If you think the new kid in school has it tough, try being an actor-turned-first-year-teacher in Philadelphia’s largest high school. The role reduced Tony Danza to tears — literally. 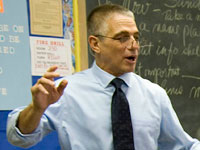 Danza was just days into the 2009–10 school year at Northeast High School when a particularly difficult class session cracked his fragile confidence. He met with David Cohen, his mentor and the head of first-year teachers, to talk through his concerns.

It was the first of several times Danza welled up during the filming of his new reality show, Teach. But he eventually found his footing and spent the next 10 months teaching a class of 10th graders everything from Shakespeare’s Julius Caesar to modern classics such as Of Mice and Men and To Kill a Mockingbird. In between he ran a highly successful poetry contest.

"It has just been a most amazing experience,’’ says Danza, 59. "You feel like you are on the front lines of something that is so important.’’

Danza never intended to do a reality show, and with his past success in sitcoms, talk shows, Broadway and Las Vegas, he’s at a stage in his career when he can be choosy. But as he approached the end of his 50s, Danza was anxious to do something different.

President Barack Obama’s call to service helped focus Danza’s attention on teaching. He was further inspired when he saw a video promoting Teach For America, which sends new teachers into neglected rural and urban areas.

Most of Danza’s friends said he was crazy when he told them his plan to join Teach For America. But a television producer pal suggested that rather than join Teach For America, he should do a reality show. At first, Danza balked, but his friend convinced him that it could do a service by showing America what it’s like to be a first-year teacher in an urban school.

"I felt a tremendous responsibility to make sure that we didn’t get anywhere near exploitation," Danza says. "We’ve got kids here. This is my show, but it’s their 10th grade."

Northeast High School agreed to let Danza teach one class of 26 handpicked students twice a day. A master teacher was always in the classroom, along with three cameras and crew. A camera also followed Danza around the school. Otherwise, Danza received no special privileges. He had to clock in by 7:30 each morning, submit a weekly lesson plan, correct papers, attend meetings of his teaching group and, from time to time, cover for other teachers.

Danza’s classroom became a favorite hangout for students, some of whom revealed their stories through their poetry-contest entries.

Danza gave the students a day in class to work on their poems. He recalls wandering around the room and peeking over one girl’s shoulder.

"Her poem was about a deadbeat father," says Danza, a father of four. "She’s writing, `I was the unwanted daughter. I looked for you at my graduation and you weren’t there.’ I got a little teary-eyed and I tried to walk away, and she says, `Are you crying?’ I said, `No, I’m not crying,’ and with that two other kids said, `You’re a crybaby, Mr. Danza.'"

Danza thinks he connected with his students. He credits his success to the teaching techniques he learned, the help he received from his colleagues and a few of his own ideas.

"What I have been trying to do is relate everything to their lives" he says. "What I’m teaching them is not just knowledge. It’s all these important life lessons. In To Kill a Mockingbird every single lesson in it is a life lesson — you know, walk in another guy’s skin, make the best of a bad situation and there’s good in everybody even though there might be some bad."

A year in the classroom has sharpened Danza’s understanding of America’s education problems. Teaching, he says, is a tough job made even more difficult by people who lay all the blame for the education system’s shortcomings on teachers without ever having prepared a lesson plan or stood in front of a group of hormonal, sometimes angry, usually rambunctious teenagers. For their part, the students must deal with peer and media pressure that sometimes glorifies bad behavior.

"I’m here telling kids that good behavior will pay off," he says. "And then they watch television and see bad behavior paying off and they tell me I’m crazy."

Danza believes that parents are the key to turning the situation around. Without their participation in public education, he says, developing a culture of education in America will be impossible. The nation’s schools will continue to struggle to attain lasting success.

For now, Danza’s teaching career is over. But the school, the kids, even the city remain in his heart.

"I’m really part of something here," he says. "Northeast is one of the great schools, with a lot of great people trying very hard. I’m a Viking. I love it."

And yes — he cried when he left.