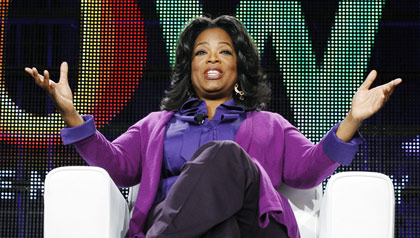 Oprah Winfrey answers a question at a panel during the Oprah Winfrey Network (OWN) Television Critics Association winter press tour in Pasadena, Calif.

Oprah Winfrey, 57, is a once-in-a-lifetime television phenomenon. As happened with Johnny Carson in nighttime talk and with Walter Cronkite as evening news anchor, replacements arrive but somehow they are never quite as good as those whose place they take.

For 25 years Winfrey, whose final Oprah Winfrey Show is Wednesday, was a brilliant afternoon talk show host. She plugged into the cultural zeitgeist just at the moment it was ready for her and she continued to keep her finger on the pulse of America through four presidents, a technical revolution and the Great Recession. Such a success on afternoon TV is not likely to happen in just that way again (sorry Katie Couric and all other comers).

Winfrey is said to have the Midas touch — that whatever she puts her finger on turns to gold — and it's true that she's had her hand in the shows (and careers) of Dr. Phil McGraw, Dr. Mehmet Oz and interior designer Nate Berkus. She made stars of her former personal chef, Rosie Daley; her trainer, Bob Greene; her personal finance guru, Suze Orman; and her best friend, Gayle King, not to mention many an author chosen for her book club.

She also launched the successful women's magazine, O, a thriving Oprah website, a satellite radio show and now a larger television venture — the Oprah Winfrey Network, or OWN. Unlike Carson or Cronkite, Winfrey is not stepping off stage for good. She's just moving onto a larger one. If it's daunting at all, she isn't letting on. Lots of superstars and former superstars have appeared in this final season to wish her well. Far more moving, however, are the tributes from fans who have been writing on Winfrey's website. Says one of them: "Our days will be empty without you, but we know you will continue to do good in whatever you choose to do. I feel like I am losing a friend."