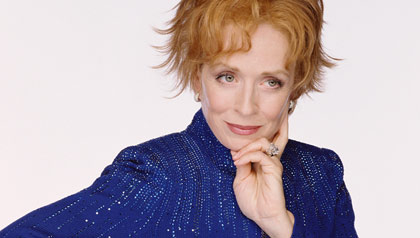 Holland Taylor stars as Evelyn on Two and a Half Men.

Actress Holland Taylor often plays characters of regal bearing — women who command the screen, take no guff and still manage to get laughs.

As Evelyn Harper, the ice queen mother of Jon Cryer and Charlie Sheen on the CBS hit comedy Two and a Half Men, Taylor, 67, is as haughty as she's ever been. Off screen, she's a little different. Here, she talks to AARP about the origins of her gallant persona.

A: It is and it isn't. Privately, I can be quite cautious and chicken little, but when I'm brought into a place where I have to do something, I assert myself and do what I have to do forcefully.

Q: How did this tough persona start?

A: Biology is destiny. If you have a body and voice of a certain type … that's going to affect how people cast you. I was once asked, when I was young, to do Blanche in A Streetcar Named Desire. That's a part I know I cannot play. It's just not in my physiology.

Q: Did you cultivate a powerful image or was it natural?

A: I don't cultivate it, no. When you play this kind of character, you often get typecast. I'm often asked to play very cold people — for instance, on Two and a Half Men. I don't think I'm cold and unfeeling, so sometimes I'm not very effective. My bosses on the show constantly correct me because I play something too soft, or with too much empathy or understanding.

Q: Did you have a role model for the sort of woman we are discussing?

A: From an early age, I was responsive to English women writers like Rebecca West and Elizabeth Bowen, smart women who had real mental refinement. In my personal life, my mother was strong in the sense of being resilient, but she had a certain delicacy, and my Aunt Louise was terrifically strong, funny and warm. She became a real lynchpin in my life for making things all right — a very comforting figure. I've always been very responsive to her or anyone like her.

Q: Charlie Sheen and Jon Cryer are your TV sons. Since you don't have children, does the cast sometimes feel like a surrogate family?

A: I refer to them as my sons, and get quite a sense of delight thinking of them as mine. There was a Mother's Day event at the Academy of Television Arts & Sciences, and both Jon and Charlie came and gave me an armful of roses. I was blown away. It was enormously fun.

Q: You once said that you "blew" your middle years; that you "did not make very good use" of your life. What did you mean by that?

A: I meant, literally, that I was preoccupied with empty things. I was so focused on acting that I was not a fully engaged person. I can think of any number of actors I know who have big, huge lives. The most famous one, I think, is Meryl Streep. I think I've even heard her say that for her, her focus and her heart is in her family, and as big as her career is, her life is bigger. Her career is inside her life. That's the model.

Q: Do you regret not having children?

A: Oh, my God, yes. I regret not having that big life that I think is what we're here to do. There are people who have tremendously rich lives who don't have a big family life, but are much more creative in their life than I was. I had this narrow focus. I didn't have a variety of things I applied myself to.

Q: Did you figure out how to fix it?

A: I made my life richer by recognizing the lack. I had gotten into a lazy habit of not aggressively pursuing activities, friends and involvement in life. The recognition was the first step. I got involved in a number of things, including the Stella Adler schools, and a play I've been writing and producing. I spent more time out and about with friends, and as recently as 2003 or 2004, I went back to school. I went to the University of Santa Monica and took a degree in spiritual psychology. That really pushed me up against the glass. I really had to come to know myself, and once you know yourself, then you can have a conversation with yourself about how you want to proceed.