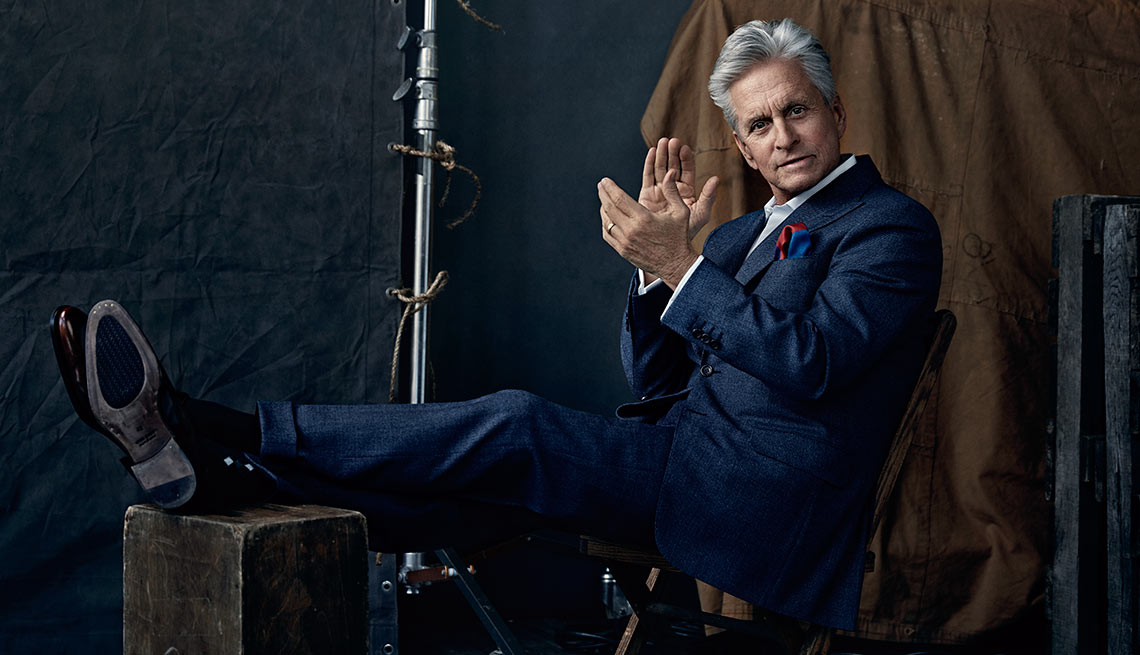 |  Michael Douglas wants to know how long we have. It's not that he's rushing off to play golf, as he does on many afternoons, or to collect his two younger kids — son Dylan, 15, and daughter Carys, 12 — from school. Douglas is talking about time in the larger, cosmic sense of the word. "I mean, you're a fool if you don't get a little more conscious at my age of how you want to spend your days," he says, gazing at the Manhattan skyline from a downtown loft. Pondering the notion, he mentions that his father, Kirk, will become a centenarian in December. To get his head around that stupendous feat, the offspring of the cleft-chinned legend calls upon the great and powerful oracle of our age. "Hey, Siri," Douglas purrs into his iPhone, the Gordon Gekko voice still limousine smooth. "How many people in the world are 100 years and older?"

Douglas flashes that magnetic grin as Siri thinks on it. At 71, the Academy Award–winning actor and producer, dressed in a tailored navy suit that sets off his ice-blue eyes and luminous silver mane, looks fantastic. As Paul Rudd, Douglas' co-star from last summer's superhero blockbuster Ant-Man, jokes, "Michael is still competing with Jeff Bridges for best hair in Hollywood."

But success today is greater than the sum of movie parts for Douglas. "Show business is not the most important thing in the world," he says. A second chance at fatherhood, another shot at his marriage, freedom from cancer, newfound spirituality — just savoring the Katz's Deli pastrami on rye in front of him: This is where he finds meaning. What gives?

"It's called mortality," he says with a laugh. 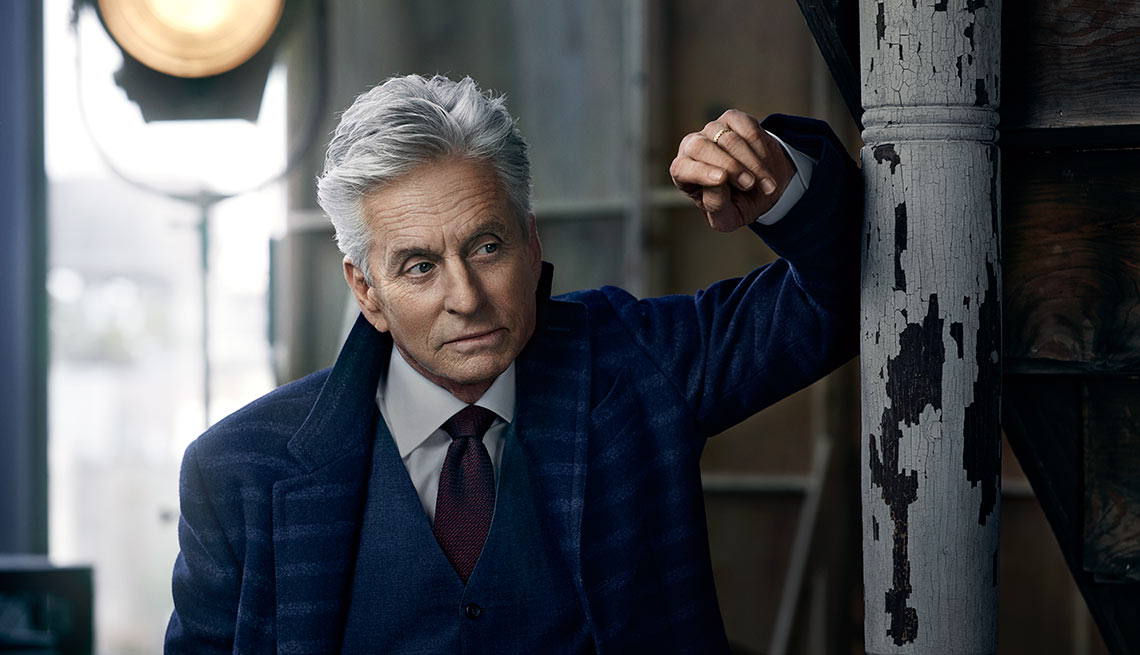 He is also still prodigiously productive. After more than 50 films — among them Fatal Attraction, Wall Street,The American President and Wonder Boys — Douglas is turning out some of his boldest work, most notably in HBO's Behind the Candelabra, winning an Emmy in 2013 for portraying Liberace in full flower. Douglas' latest is the upcoming thriller Unlocked, in which he once again plays a morally ambiguous intimidator with enough devilish charm to win you over.

Upon the occasion of receiving AARP's 2015 Movies for Grownups Career Achievement Award in February, Douglas is reflecting on a life with as many rises and falls as the streets of San Francisco, where he first proved himself on the popular TV series of the same name. The ride recently included a 2013 separation from his wife, actress Catherine Zeta-Jones, while managing her struggle with bipolar disorder.

"It took work on both our parts," Douglas says of saving the marriage. "I don't think there's much chance of fixing a relationship if one of you is already out the door." Notes Zeta-Jones, "I think we're both mellower and wiser. That comes naturally with time. We count our blessings."

Additionally, Douglas' son Cameron, 37, the only child from the actor's 23-year first marriage, to Diandra Luker, remains in a New York prison for a 2010 drug conviction. He is scheduled for release in 2017. "I see him twice a month now because he's incarcerated closer to our home," the actor says with matter-of-fact resignation. "He's a drug addict, but he's done more than his fair share of time for it."

Douglas also battled stage 4 tongue cancer, now in remission. "It's been five years, and I feel really good," he says, holding his hands as if in prayer, "but you have a new appreciation. I'm more motivated, more responsible. My younger kids could be my grandchildren. I want to be here a while."

At that, Douglas glances down for Siri's assessment. "Wow," he says, dragging a finger across the phone screen. "Dad's in pretty rare company. What are we, 7 billion people now? It says here, the number plummets to a total of 480,000 living to age 100 and up. That's not a big group."

In many ways, Douglas is the quintessential boomer icon, down to the unaffected way he carries himself. No questions are off-limits; there's none of the diva behavior associated with Hollywood royals. During an earlier photo shoot, he was singing along to Marvin Gaye's "Ain't No Mountain High Enough," falsettos and all, and he's currently sitting with his feet kicked up on a chair, shoes off, hands cupped comfortably behind his head, eager to engage. 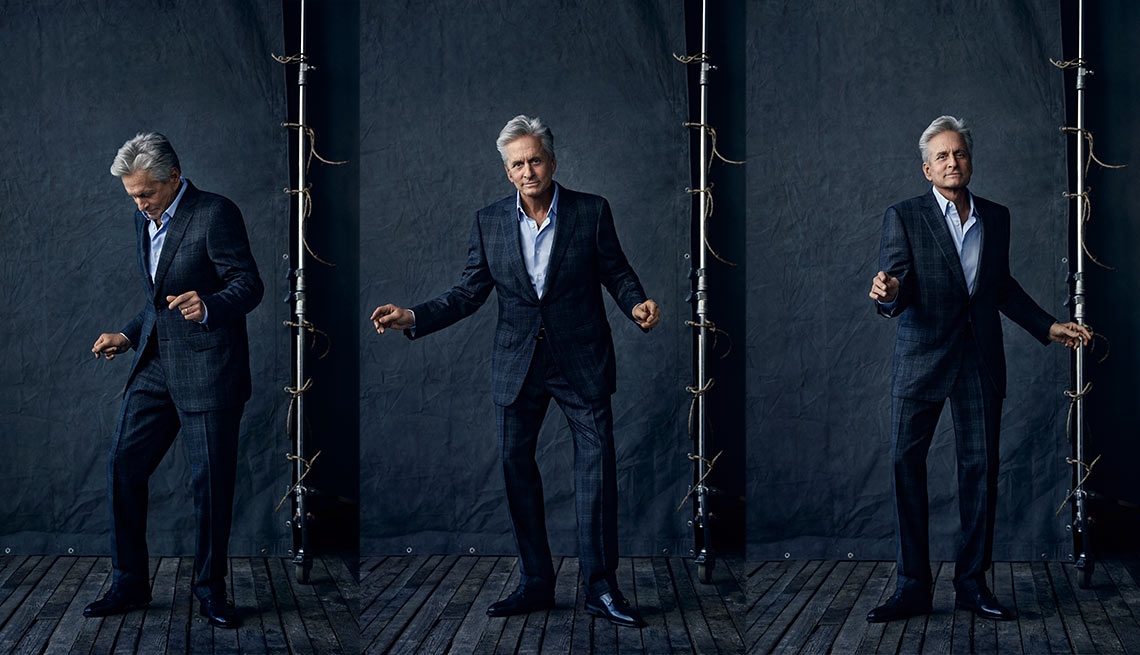 Not one to stand still, Michael Douglas, 71, has starred in over 50 films over a span of five decades.

Born in New Brunswick, N.J., Douglas watched his father ride out the last era of the unapologetic American man's man. Forever linked with the role of the eponymous hero in Spartacus, Kirk Douglas, like his contemporaries John Wayne and Burt Lancaster, could land a punch, command an army and still take home the leading lady. Being a dad to Michael and his three younger brothers was often a trickier proposition. At his peak, the elder Douglas was making as many as five movies a year and could be remote and combustible. "He was working so hard, and I think there were no options," Michael says now, with compassion rather than resentment. He admits he barely took the time to be a parent himself when Cameron was growing up — one of his biggest regrets. "When you're busy all the time, you don't think about a whole lot of things other than the realities that are in front of you," he says.

During the Woodstock era, Douglas tuned in and turned on as a student at the University of California, Santa Barbara, before dropping out for a year. He returned to get a drama degree in 1968 and picked up a few bit parts before landing on The Streets of San Francisco in 1972. As he shouldered out from under his father's shadow, jumping from Streets to feature films, he managed to become the handsome face for whatever his contemporaries were going through, a sort of human weather vane for the boomer zeitgeist. The 1979 movie The China Syndrome — in which Douglas starred, opposite Jane Fonda, as a cameraman investigating a nuclear plant cover-up — opened 12 days before the Three Mile Island meltdown. Fatal Attraction arrived at the apex of the 1980s anxieties about sexual liberation gone too far. Wall Street epitomized what yuppie greed could do, and The War of the Roses hit just as ugly divorces exploded across America. "Michael's always been an everyman for people, but with style and swagger on top of the authenticity," says Fonda, another second-generation star. "You never see him faking it. It's why you root for him and also what makes him quite sexy, even when he's playing difficult characters." 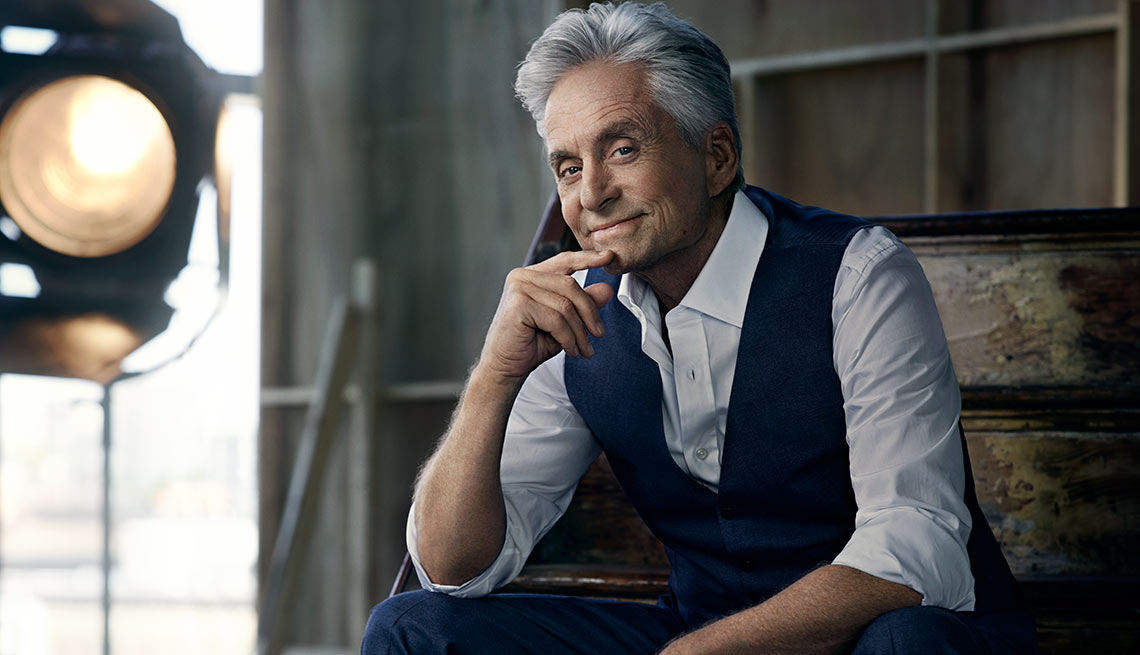 Douglas credits his son Dylan for spurring a late-in-life spiritual awakening to his Jewish roots.

Douglas embodied some of those darker elements in his private life, too. In 1992, he was treated at an Arizona rehab center for substance abuse. Three years later, Luker filed for divorce and was awarded $45 million as part of a settlement. Douglas suffered another blow when his half brother Eric died of a drug overdose in 2004.

Jann Wenner, the founder of Rolling Stone and one of Douglas' close friends — he calls "Mikey" his "partner in crime" — saw at close range how those experiences shaped Douglas. "He's survived a lot, and he's a better man for it," Wenner says. "The wisdom of where Mikey's at now, it comes from a lifetime of pushing through, staying solid in who he is and believing in humanity."

That's not to suggest that Douglas is a fusty lion in winter. As Wenner tells it, "Mikey to me is still the tough cat on the back of a boat in Panama wearing a Hawaiian shirt, throwing back a few drinks, looking around with that twinkle in the eye, saying, 'OK, what do we got going?' "

Zeta-Jones sees the past few years as a period that helped her husband peel back layers on who he is. "For anyone facing a challenge like cancer, it focuses you on what's important," she says. "You realize precious moments are something you can't take for granted."

For Douglas, that even means taking an active role with something as ungraspable as faith. Two summers ago, the family was on vacation in Europe when Dylan ran to his dad in tears. He said a stranger at the pool had shouted anti-Semitic slurs after noticing the boy's Star of David necklace. Douglas, who has spoken out against nuclear proliferation as a United Nations Messenger of Peace since 1998, found a new cause. As he wrote in a Los Angeles Times opinion piece last year about the incident, "If we confront anti-Semitism whenever we see it, if we combat it individually and as a society, and use whatever platform we have to denounce it, we can stop the spread of this madness."

Although Kirk Douglas, who was born Issur Danielovitch, is Jewish, Michael didn't grow up with religion, nor did his children. But as Dylan approached adolescence, he grew curious about Judaism and asked to have a bar mitzvah. Douglas admits he and Zeta-Jones were skeptical. "We thought, Yeah, the presents, the party." But Dylan assured his parents, "When they light the candles, I just feel something warm, and it comes alive." Dylan took to Torah study and "brought a lot of the Jewish values into our home — community, family, working to repair the world," Douglas says.

In turn, Douglas reconnected with his own spiritual side in a way he hadn't since hanging out with the Maharishi in Santa Barbara all those years ago. "They always talk about lessons being passed down from father to son, but if you keep yourself open, you can actually have things come up from your children," Douglas says.

The family held Dylan's bar mitzvah in Israel, where Douglas later received the 2015 Genesis Prize, which honors "exceptional people whose values and achievements will inspire the next generation of Jews." He has since appeared on the pulpit at Reform Judaism congregations to talk about staying Jewish at a time when nearly 60 percent of Jews are marrying interfaith. "The Jewish population is decreasing, so it's important to encourage people to come back to the fold." The family now has Sabbath dinners together on many Friday nights, and Carys is preparing for her bat mitzvah in May.

The irony is not lost on Douglas that his dad had a spiritual awakening at exactly the same point in his life. In his early 70s, Kirk narrowly escaped death when the Bell Jet Ranger helicopter in which he was a passenger collided with an aerobatic stunt plane and plunged 40 feet to the ground. Two men were killed. A few years later, Kirk suffered a stroke and wondered if God might have it in for him. He began studying Jewish scripture, had a bar mitzvah and committed to giving away much of his wealth to charity. "The crisis opened a new world that otherwise might have passed him by and helped him do so much good for so many people," Douglas says, adding that it's also been a blessing for him personally. "We're very close now, Dad and I. I feel fortunate having him around long after the highlights of his career."

Douglas lost his mother, Diana, last summer to cancer, at age 92, and he sees his father eyeing the proverbial hands of time, almost as if it were a sport. "My father now has a betting game with his friends," Michael explains, "guessing the average age of death in the Sunday New York Times obituary column." Douglas clearly finds it amusing — until he's asked if he ever joins them in the wager.

"Are you kidding?" he says. "That's not a game I'm getting into just yet." 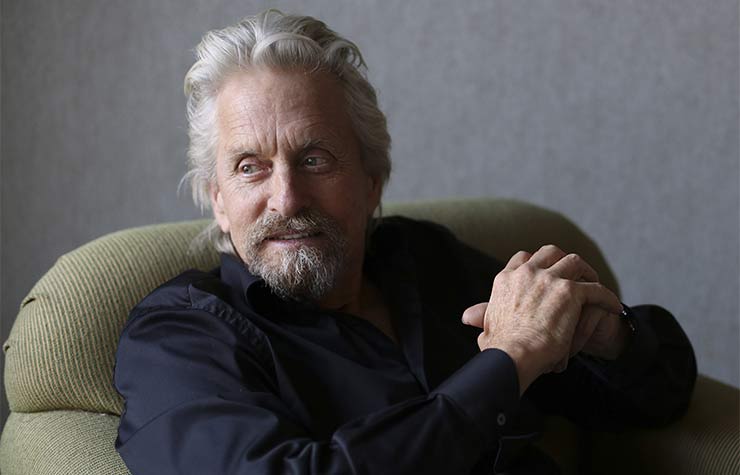 Michael Douglas: A Life on Screen

Highlights from the versatile entertainer’s half-century (and counting) career