As his seventh, most personal album arrives this month, the son of slain Beatle John Lennon opens up to AARP about his life, including an ongoing search for love 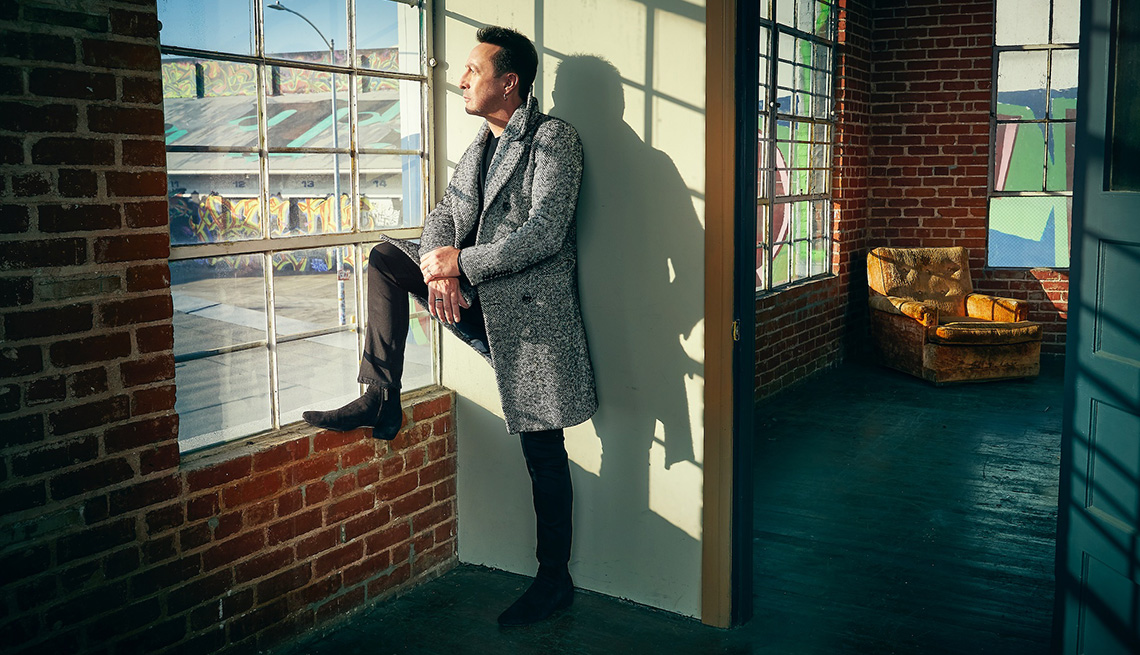 Julian Lennon, son of murdered former Beatle John Lennon, has found a way to move forward in life by digging up the past — figuratively and literally — with his latest, very personal album.

Jude, which releases on September 9, was assembled from old forgotten demos unearthed in his business manager’s basement. The title points to the Beatles classic “Hey Jude,” written by Paul McCartney to console then-5-year-old Julian after John left him and his mother, Cynthia, for Yoko Ono. The songs explore struggles and revelations both personal and universal.

Lennon, 59, found success not because he is the son of John Lennon, but in spite of it. His birth and his parents’ marriage were hidden from the press when he was born in Liverpool in 1963, just as the Beatles were exploding. He was largely excluded from his father’s new life (and will).

Four years after his father’s 1980 murder, Lennon burst onto the music scene with the hit debut album, Valotte. Five albums followed. After 2011’s Everything Changes, he retreated from music to wear other hats: as a photographer, children’s book author (the best-selling trilogy Touch the Earth, Heal the Earth and Love the Earth), film producer (the documentary Women of the White Buffalo) and philanthropist (his humanitarian White Feather Foundation).

Speaking from his home in Monaco, Lennon tells AARP about his renewed enthusiasm for music, a new willingness to face and embrace his past, and his hopes for the future.

How did BMG label CEO Hartwig Masuch lure you back to the music fold?

I could tell his passion for music was huge, more so than many before him at record companies. He wanted a whole album. I told him I don’t really see that. I take a long time to do albums, and having had them be shelved by labels before, I was a bit tired of it all.

But then you discovered a trove of lost material.

My UK business manager was retiring, and he had a bunch of boxes in his basement. There were old reel-to-reel demos of my first album, left uncovered for 30 years, and I thought they must be destroyed by now. I had a cassette of songs that were borderline finished. Others are from 10 and 20 years ago. We digitized everything. Lo and beheld, it’s audible. This was stuff that never quite made it onto other projects. Why not now? It sounds great. The sentiment is still spot-on. There are hundreds of these things. I’ve got work for years to come.

So, how did these fragments evolve into an album?

At first, I didn’t think they worked as an album. It was during COVID, a weird time. My friend Justin [Clayton] and I looked at “Every Little Moment,” and we discovered it was in perfect shape. I wanted to upgrade the production and get some real drums. I resang the choruses. Next was “Not One Night,” a song I sang in the guest room of my bungalow in the L.A. hills 30 years ago. We kept the original vocal and put new strings on it. I hadn’t done engineering in years, and the first song I dove into on my own was “Freedom.” Once I got the soundscape for that, I had the soundscape for the album. It’s got to have space and a journey. When I listened to Jude as a solid finished piece of work, I was in tears. This works. It’s deep and meaningful, and it moves and it discusses many issues, though it’s mostly about looking in the mirror. 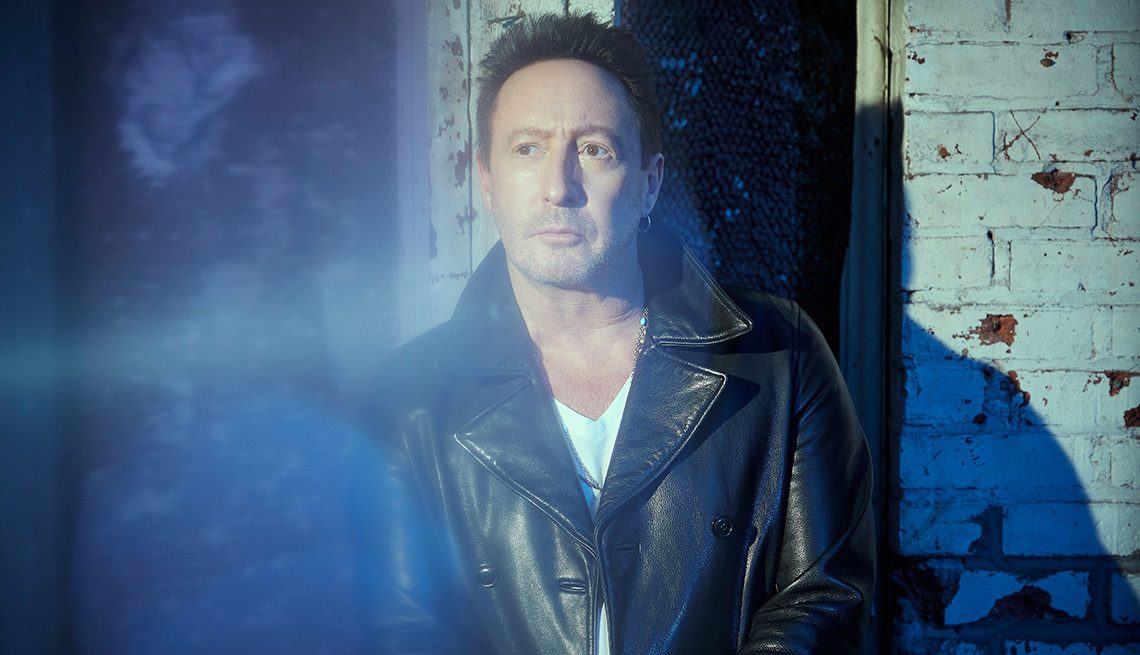 You do seem more willing than ever to reveal yourself.

Through the whole COVID period, my life changed completely. It was about asking questions. Who am I? What is my purpose? If I’m sad, how do I change so I don’t have the anxiety and fear I’ve had in life? When we were allowed to step outside again, I started to power walk just to get out and breathe. I wanted to find a way to be the best person I can be. I want to break through any barriers or any stresses that I had before. That reflected in the title Jude and what Paul’s lyrics meant: the world upon my shoulder.

How did the Beatles documentary Get Back impact you?

I watched it with Sean [his half-brother, son of Yoko Ono]. I was seeing Dad as I remembered him as a kid, and I fell in love again with that goofy, smart-aleck, cynical madman on TV who was extremely talented and bright and beautiful.

Why did you legally change your name in 2020?

My birth name was John Charles Julian Lennon. That has always been an issue going through airports or security. People wouldn’t necessarily recognize me, and there would be smart-ass remarks. That would give me anxiety. It stressed me out for years. I had to change John and Julian around. That was taking a weight off my shoulders. I was finally Julian in this world. It wasn’t just the legal aspect of it. This all made sense to me in my mad mind. I know myself more now than I ever have. I have more balance, focus and love than I ever had. It means a lot to be at the stage that I can say, I am Jude. You can ask me anything now. It’s a big, big change for me. I hold my head up high now.

After swearing for years you never would, you recorded a cover of your father’s “Imagine” to raise funds for Ukrainian refugees. Was that a tough performance?

It was not something I ever wanted to do, and I knew it would take something really bad in the world for me to consider it. I’d been watching the Russia-Ukraine scenario, and I was horrified and heartbroken. Especially after COVID, it felt even more important to put love out there. The only thing I could think of to make people listen and to bring awareness was by doing “Imagine.” But once I said yes, you want to talk about panic attacks! The first thing I decided, no piano. It had to be acoustic guitar, simple, no production. It was shocking how well received it was and how it’s able to infiltrate a new generation.

In years past, you expressed bitterness and disappointment in your father for leaving you and your mother. How have you processed that trauma?

You cannot move on without forgiveness. I was able to forgive by learning and understanding his life at that point in time. He was just a kid when the world went berserk on him. It’s amazing he was as sane as he was. It was more about what he did to Mum. That’s what hurt the most. She was the one who fell in love with him, lived with him, had a kid with him. And he walked out the door. That was bad. Toward the last part of his life, it was nothing but love and figuring out who we are and moving forward. And that’s the saddest thing of all. He was taken away from me a second time. I think we would have got on. It would have been an interesting life.

Did his infidelity and early death turn you against the idea of getting married or having kids?

I looked at it as kind of a weird curse. He had the same thing with his parents. He lost his mother when he was 17. I was 17 when Dad passed. I still want kids. I still believe I’m going to have kids, without question. I was in a relationship for a long time, but sadly that fell apart about 10-plus years ago. I think she’s out there. I figured if I cover enough ground on so many subjects, I’m bound to meet her somewhere. Until that point, I keep marching on, doing what I feel is right in the world.

Did you turn to film production, writing, photography and philanthropy in part to escape the spotlight?

After 30 years doing music, I did absolutely fall in love with being behind the scenes, taking photographs and working on The White Feather Foundation and documentaries like Kiss the Ground. I never felt I received any special privileges or any position for being John’s son, though many in the public eye and even in the media misconstrued what went down on many levels. It’s always been me working my way up the ladder and trying to make my mum proud. That’s the only thing that ever mattered to me. 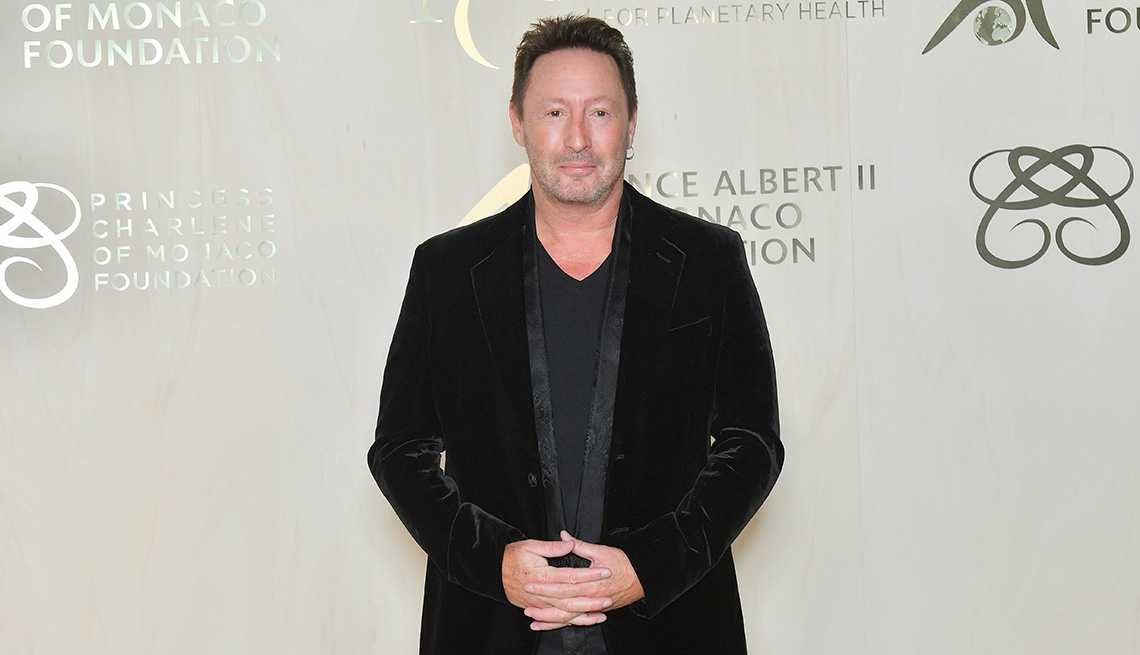 You've described yourself as a workaholic. Do you allow yourself downtime?

If I can see that I have a good day off or a weekend, I’ll jump in a convertible or get on my motorbike and just ride. I’ll have an idea of a direction and look at a map once and go. I’ll get lost. Or getting out on the sea. I love sailing. As long as I can get those quick breaks, then I’m OK to work full steam ahead. I twitch if I don’t. I’m driven. What can I say?

Looking down the road, what are your priorities?

Love is high on my list. I can’t wait to meet whoever she is, wherever she is. I long for that. The workload has been sufficient, and I don’t know if I would have achieved all that I have in all the mediums I’ve stuck my toe into if I had been in a different position. I have not only been building a foundation of work that I can be proud of, but this will support a family in every way possible. You have to challenge yourself, and I think I’ve done that. But it’s important to rest and breathe, even if it’s just sitting on top of a hillside watching the sunset. I’m simple in that regard. I don’t need anything else, except a good hug every once in a while. 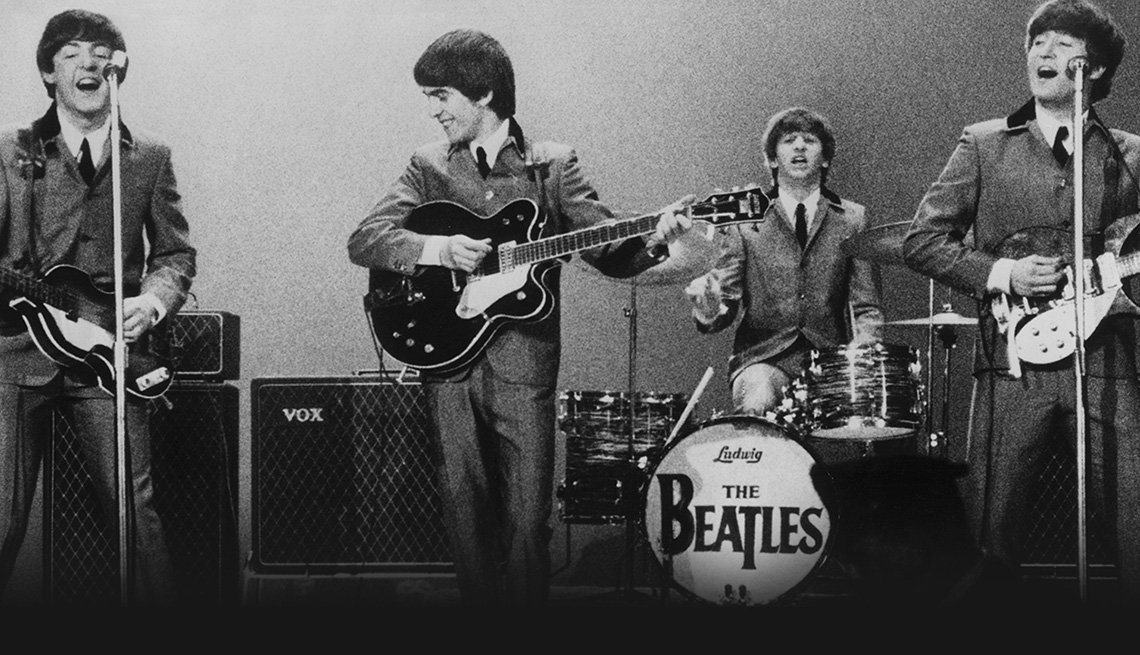 The 11 Best Movies With (or About) the Beatles

What to watch when 'The Beatles: Get Back' makes you crave more Fabs films 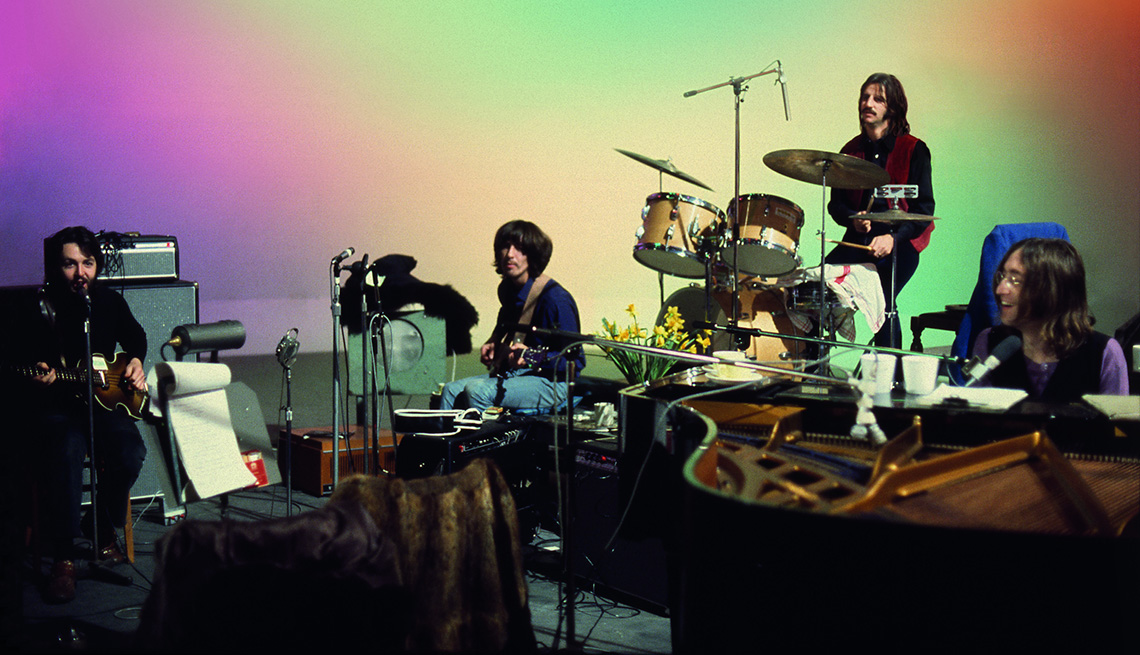 'The Beatles: Get Back' ﻿Examines the Band's Final Chapter 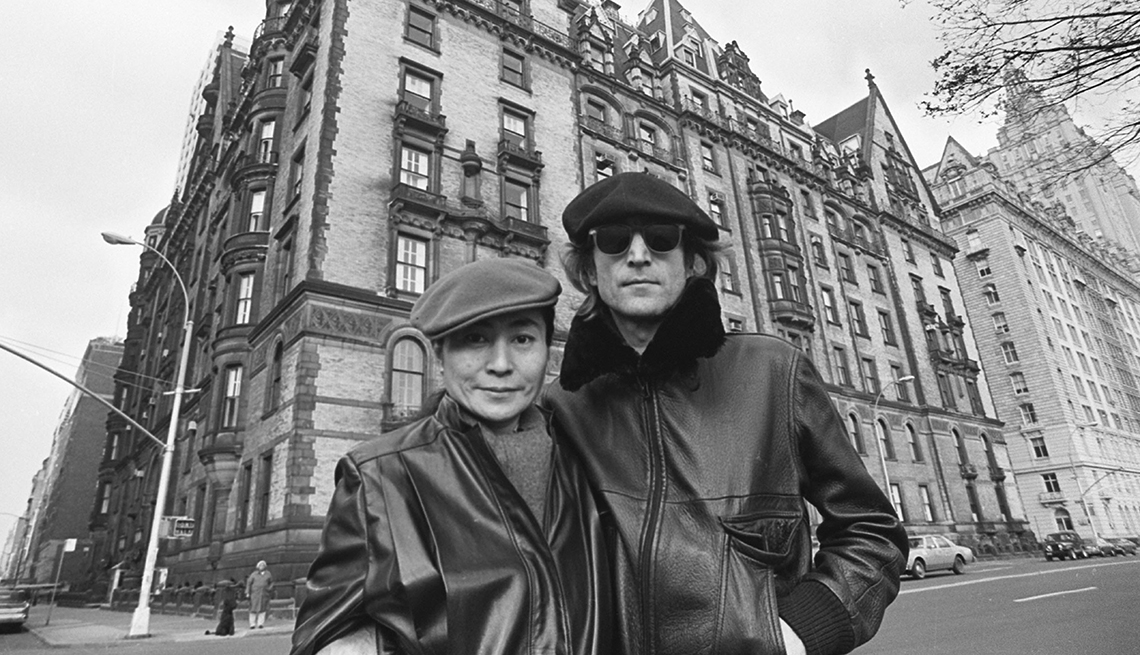 Celebrities remember the Beatles legend 40 years after his death