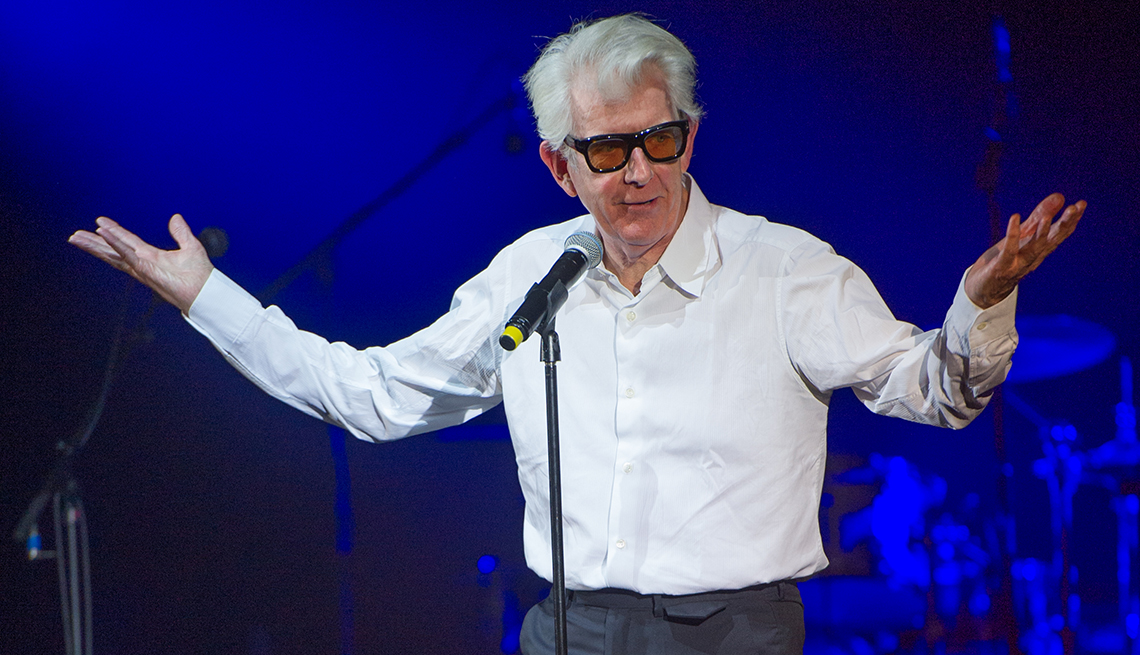 In 1974, British singer-songwriter Nick Lowe released a song that eventually became an anthem of perseverance in troubled times. That song, “(What's So Funny ‘Bout) Peace, Love and Understanding,” recorded by Lowe's band Brinsley Schwarz, achieved popular acclaim when it was covered by Elvis Costello in 1979. Now 71, Lowe has had a successful solo career, with 14 studio albums and well-known songs such as “Cruel to Be Kind” and “I Knew the Bride (When She Used to Rock ‘n’ Roll).” His latest work is an EP, Lay It On Me, to be released June 5. Here he talks about the power of music during crisis.

Q: How does music help you through something like the pandemic?

A: Because I'm a songwriter, a bit of lockdown and social distancing is sort of business as usual. I don't want to sound too flippant about it, but I spend a lot of time on my own, and so in that respect, nothing much has changed. But the phone's not ringing, so I can stare out of the window with my mouth open to my heart's content, which is one of the things I like to do. That's an important part of the writing process. 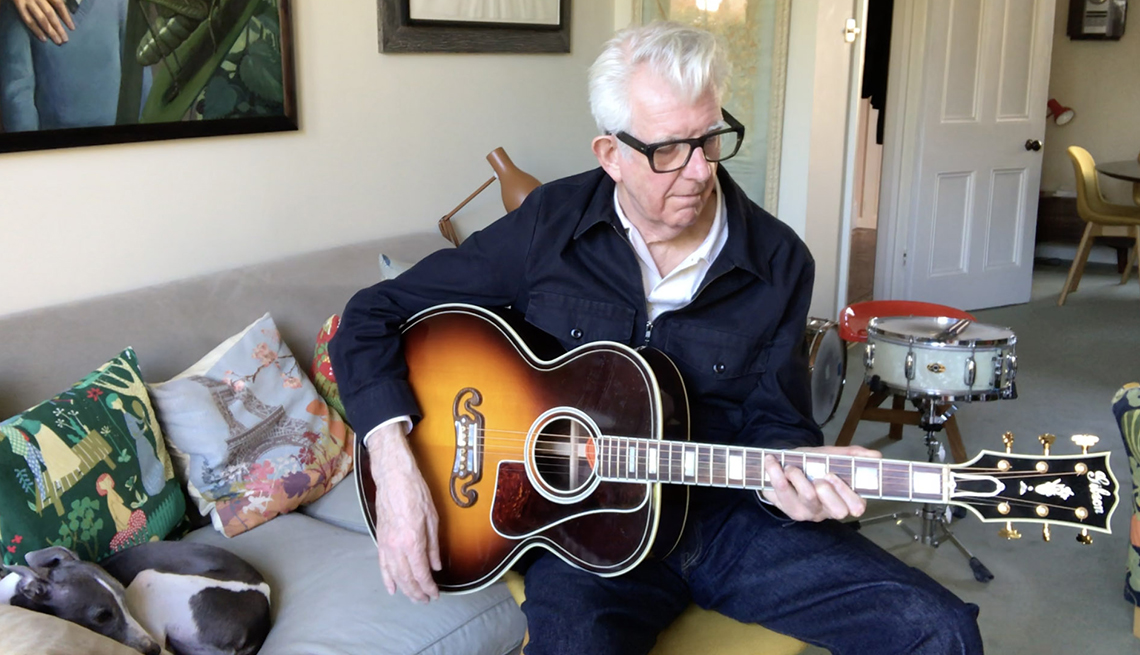 Nick Lowe playing the guitar inside his London home.

Q: You did a performance video from your home recently. How important is it, even in a time like this, to continue to perform and try to connect with fans and listeners?

A: I'm not of the internet generation. It's a brand-new experience to me, really, to sing to a phone. It's not something I'm used to. But there seems to be quite a demand. I don't feel like I need to have my face in front of the public. But, you know, I've got a new record out, whatever that means nowadays. I wouldn't normally be talking about myself or putting myself about unless there was a global pandemic or I had a new record out.

Q: What do you hope this provides to people, these efforts to perform music virtually like this?

A: I imagine that when people see a musician that they're interested in is sitting at home and not freaking out, not panicking about the situation, I suppose that cheers people up because, you know, the news is so dire.

Q: Let’s talk about “(What’s So Funny ’Bout) Peace, Love and Understanding.” That is one of those anthem-type songs that people will often turn to when things in life may seem bleak. What inspired you to write that song?

A: One day I woke up and the idea for that song came to me, the title came to me. I thought, Well, it's a bit of a mouthful; it doesn't exactly trip off the tongue. But I thought, Well, this is a really good idea. It's the first actual real idea I've had, that I haven't sort of stolen from somebody else.

And I wrote the song, and I was a pretty stupid youth, really, in many ways, but I did one clever thing. The one clever thing I did with that song was to not mess it up in the verses by making it too complicated. I thought to myself, This is a great title. Let the title do all the work for you. I had a pretty good tune for it going on, but the clever thing I did was to keep it fairly bland, almost, you know, in the verses and just let the title do the work.

And it worked pretty well. But, of course, it wasn't until Elvis Costello — it was Elvis who brought it in front of the public, and it caught people's imagination. It's never actually been a hit. But it's been covered by so many people, it's almost like it is a hit song. And, of course, I look forward to a time when a song like that is not required anymore. But it doesn't seem to be happening anytime soon. 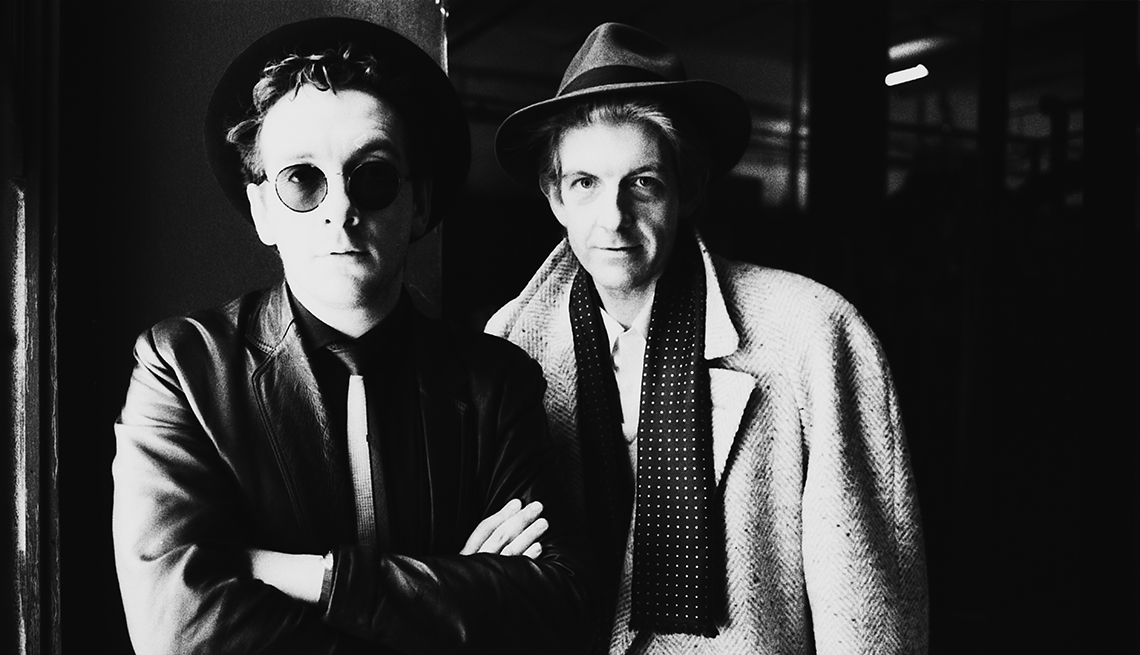 British singer-songwriters Elvis Costello (left) and Nick Lowe together in London in 1986.

Q: How do you feel about that enduring legacy of that song?

A: Well, it is amazing. I've written quite a lot of songs, and most of them are, frankly, forgettable. But if you do it for long enough and you write enough of them, you're going to hit the jackpot on a few occasions. And I've written a few good ones that have been successful — actual hits and ones that other people have recorded and made them hits. But that song, “Peace, Love and Understanding,” it's almost I feel like I had nothing to do with it. I've heard so many covers, when I hear somebody doing it, I'm not immediately struck by the fact that, Oh, they're doing my song. It's really odd. It really does feel like it's like, uh, “Auld Lang Syne” or “Happy Birthday to You.”

Q: What do you think makes for a great uplifting song?

A: I don't know, Gerry Mulligan — I'm listening to a lot of jazz nowadays, so I'd be more inclined to listen to something like that, something with more integrity than a pop song, perhaps. But then again, James Brown doing “I Feel Good” works just as well.