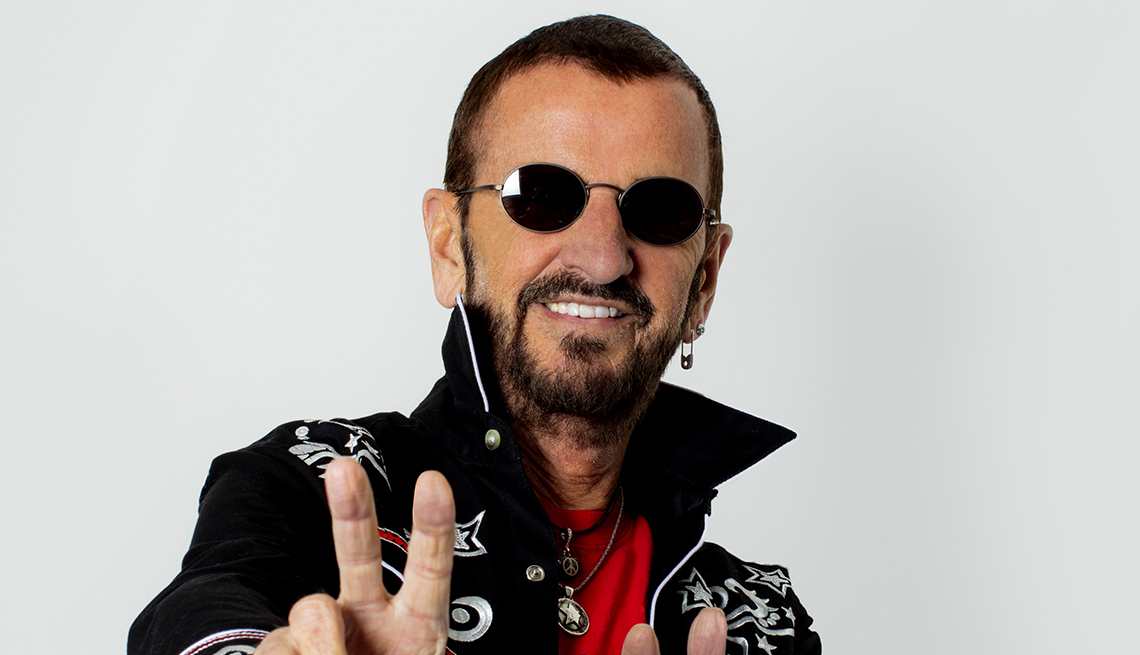 En español | Ringo Starr, 79, has come out with a new studio album, What's My Name, that includes collaborations with such longtime pals as former Beatles bandmate Paul McCartney, Dave Stewart and Starr's brother-in-law Joe Walsh. It's an eclectic collection of songs that jump, from rockers like “Gotta Get Up to Get Down” to the hopeful “Send Love Spread Peace” to “Money (That's What I Want),” the Motown hit covered by the Beatles back in 1963.

Its highlight is a poignant revival of “Grow Old With Me,” a previously unreleased tune from John Lennon's 1980 Bermuda Tapes demo collection, sung on the new album by Starr (born Richard Starkey) and McCartney.

We talked to the musician about What's My Name, life in his eighth decade and becoming Sir Richard.

How did you end up with the guest artists on the album?

I started this record the same as all records: I called 10 friends and thought, We'll each write a song together. People sometimes just pass by and ring the bell. If I'm in the studio and they can play, they're on the record.

The title is a rhetorical question. Does anyone ever not know who Ringo is?

No. But the craziest things happen. John died in 1980. In the ‘90s I'm walking down Walton Street in London and a guy says, “Hey, John, what's happening?” Oftentimes they only know it's one of us. They just don't know who.

Tell us about “Grow Old With Me” from the John Lennon demos.

Jack Douglas, who produced a couple of John's records, asked me, “Did you ever get that cassette?” Cassette! That's how long ago it was. He got me a copy of John's demos. At the beginning of the cassette, John says, “That sounds like it would be wonderful for Richard Starkey. That would be great for you, Ringo!” It was 39 years since he'd gone [and] I'd never heard this track. It was one of the last things he was doing. He'd finished all the other tracks. This he'd left as a demo. I said, “I'm going to do it,” and did my best. It's a pretty emotional vocal, actually.

Is it true that you never came close to having a real reunion of the Beatles?

Never. We played on each other's albums. We were still mingling. But we were never a band again. There was one time we were invited for like a trillion dollars to put the band together. The opening act was a guy who fought a shark. We said, “No, I don't think so."

Why no drum solo on the album?

I like to play with the band. God bless all those drummers who do drum solos. The only drum records I ever bought were Cozy Cole's “Topsy I” and “Topsy II” (1958). When I listened to the rock records that came out, I didn't dial in on the drums. I dialed in on the whole record.

What can you tell us about your new coffee-table book, Another Day in the Life?

I have pictures of plugs in the wall and this vegetable drink I have every night. You're sitting around a dressing room and start taking pictures of whatever comes up. It's a hobby, a habit I have. Check out the spoon. The spoon looks incredible.

How do you stay healthy?

I wasn't always healthy as an adult. I used to love alcohol and drugs, but those days are gone. I started working out and eating better food. I've been a vegetarian since 1992. Linda McCartney had a lot to do with that. She said, “Don't eat anything with a face.” I took that to heart. And I haven't had a drink or drug since 1988. There's so much more time in the day!

You were knighted in 2018, 21 years after McCartney. Why the long gap?

You'd have to ask the queen. I was not expecting it after such a long time. The emotion is really weird. You come from Liverpool, from the lower working class, you join a few bands, and one of them does really well, then you're kneeling down in Buckingham Palace. It's like something from a movie.