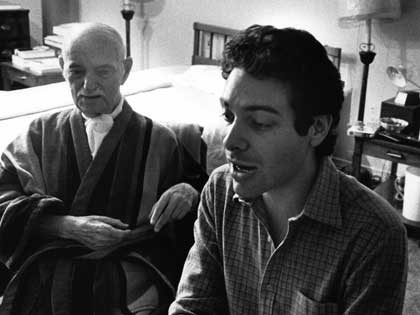 Singer, pianist and musical preservationist Michael Feinstein, 54, is our country’s foremost expert on the music of the Great American Songbook, popular music from the days of Tin Pan Alley and old Broadway. Feinstein has channeled his love of this music into Michael Feinstein’s American Songbook, a three-part series on PBS premiering on Oct. 6, and continuing the following two Wednesdays. The series documents Feinstein’s efforts to preserve music that often came close to being lost, and includes performances and anecdotes about many of music’s greats.

• Your Life Calling: Rediscovering Your Passion for Music. Watch

Feinstein — whose new CD, Fly Me to the Moon, came out Sept. 28 — spoke to AARP about the origins of his love for this music, and the very special mentor who changed his life.

Q: Why does the Great American Songbook mean so much to you?

A: It’s an emotional response that’s been with me since the first time I experienced this music. Even though, at that age, I didn’t know anything about what I was hearing, it was music that resonated with me, and continues to do so.

Q: Tell me about your first exposure to this music.

A: My father was an amateur singer, and there was always a lot of music in our home. When we had family gatherings, everybody would sing, and my father and his brothers would do barbershop harmonies. My parents had all the cast albums of various shows, because in those days everybody had cast albums, not just gay people.

Q: Do you think your happy musical memories with your family are part of why this music is so special to you?

A: The music my parents exposed me to still causes memories that evoke images of childhood. Scientific research has shown that triggers — be they music, or the smell of a certain perfume, or the taste of food — unlock specific memories that otherwise we would not be able to as easily recall.

Q: In addition to your parents, you had a very important mentor. Tell me about your relationship with Ira Gershwin.

A: I was 20 years old when I met Ira. He was 80. Getting to know him and consequently work for him was my college education in what I now do. Ira was not only a wonderful human being but a compassionate teacher, and someone who was excited to pass on what he knew to another generation. I came along at the right moment.

Q: What were your specific duties for him?

A: I was originally hired to catalog his collection of phonograph records, and very quickly became his archivist. I took care of everything in the house, as well as being his eyes and ears to the outside world if someone wanted to do a Gershwin project, or wanted someone to take a look at what they were working on in connection with that catalog.

Q: What were some of the most important things he taught you?

A: Ira taught me life lessons that were gleaned from his experience of the importance of having a strong family. He also taught me that a career in show business is something that is ephemeral, and in many cases temporary.

As far as singing and performing go, Ira taught me a tremendous amount about how to interpret a lyric, how to phrase a song and presentation, including how to program a show. And, of course, the hundreds of anecdotes — stories that he shared about the creation of his songs, and other stories that gave me a greater sense of what that era of music-making was like. It gave me the idea to start incorporating into my shows information about the songs I perform, in a way that has [now] become more commonplace. But when I was doing it, it was unique and fresh.

Q: Do you think you would have come as far as you have in your career were it not for this relationship?

A: I don’t think I would have had the career I have now without Ira and his compassion, and the connection to him. Doors were opened for me because people knew I worked with Ira or knew Ira, and so people were intrigued and curious about this young kid who was so consumed with an earlier era of music. In those days, there weren’t too many people performing what we now call the Great American Songbook, so there was a unique aspect to what I was doing, coupled with a connection to one of the seminal creators of that body of work.

Q: Now that you’re as prominent in that world as you are, have you mentored anyone in a similar way?

A: One of the things I’m doing now with the Michael Feinstein Foundation is to share the music with young people. We have master classes, musical challenges and competitions we do yearly, and the foundation has financed the educational website that’s partnered with the PBS series. The PBS shows are entertaining, but there are also study guides online, as well as a whole musical history that people can access. It’s particularly important to me and to PBS to have the educational component available so teachers can use these programs, and young people can explore more on their own. So what I do now is heavily connected to teaching, and passing on what I’ve learned to succeeding generations.