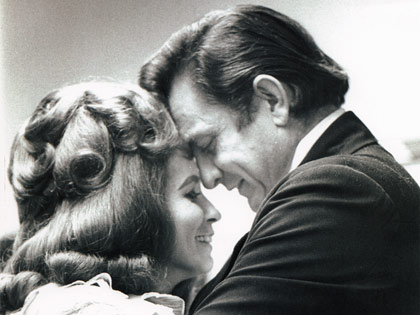 He was the man in black. She was the woman whose blue eyes he saw everywhere. Country music fixtures before they ever met, together they formed a partnership as solid as bedrock. Looking back at their history, it's really no surprise that Johnny and June Carter Cash were drawn to one another. Both were born into families who embraced country music, both could command a stage. They ran in the same social circles and were introduced by none other than the King himself, Elvis Presley.

But for all their similarities, there were vast differences. June‘s image remained wholesome throughout her career. Johnny was a bit of a loner, not only credited with roughing up country music's clean-cut image, but blighting his own through drug and alcohol addiction. With her help, he worked hard to overcome his addictions, though it proved to be a lifelong struggle: As late as 1985, he checked himself into the Betty Ford Center.

While Johnny Cash won numerous accolades during his lifetime, June is probably most famous for co-authoring (with Merle Kilgore) "Ring of Fire," the atypical and dark love song about her unrequited love for Johnny during their early friendship. The Cashes remained together until her death in 2003. He died a little less than 4 months later. They are buried beside each other in Hendersonville, Tennessee. 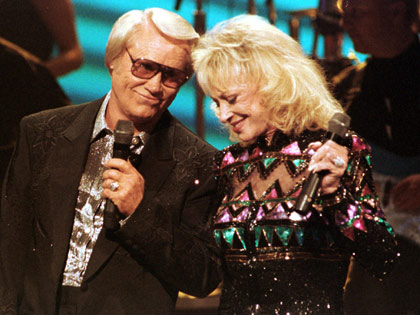 Known to many as the tragic country queen, Tammy Wynette was the first country music artist to go platinum and counts more than 20 number-one hits on her resume. Talented but headstrong and prone to drama, she was a disaster when it came to relationships. Her gift lay in the endearing and sad delivery of her songs. In tunes such as the famed "Stand by Your Man," fans and critics alike felt the devastation residing beneath. This dark undercurrent may have drawn her to George Jones, a superstar in his own right, Jones charted more than 160 songs on the Billboard charts during his career, more than any other country artist.

During their six-year marriage, Jones made headlines for more than his music. Notorious for his off-stage bad habits, which included a cocaine addiction and an uncanny ability to locate the nearest bar, he became notorious for skipping out on shows.  His many concert cancellations (more than 50) over his career earned him the nickname “No Show” Jones.

Although their marriage crumbled beneath the limelight, Wynette and Jones continued to collaborate in the studio. Together, they recorded three songs that reached the top 10 country music charts. Two decades later, in 1995, they paired up again for their reunion album, One — the last album Wynette recorded before her death in 1998.  Jones, happily married to his fourth wife, manager Nancy Sepulvado, continues to perform today. He credits Sepulvado with saving him from his hard-living ways. 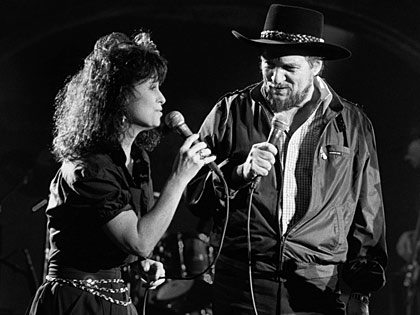 The Outlaws: Waylon Jennings and Jessi Colter married in 1969 and remained together until Jennings' death in 2002.
Ebet Roberts/Redferns/Getty Images

Waylon Jennings and Jessi Colter shared a love of music and an independent streak. Jennings’ first flirtation with music was as a disc jockey at the ripe age of 14.  By 18 he was playing bass with his childhood friend Buddy Holly. Colter spent much of her sheltered and solitary childhood under her mother's watchful eye, writing songs and playing the piano in church. Her passion for country music ignited when she first heard the notorious George Jones. At the age of 14 she produced her first single, “Lonesome Road.”

They met in the 1960s  and their initial connection, according to Colter, was intense. They married in 1969. Along with his friends Johnny Cash and Willie Nelson, Jennings was part of a movement in country music that broke from previously established norms. Collaboration wasn't encouraged within the industry, but Jennings didn’t care: In 1976 he cut the album Wanted: The Outlaws with Colter, Willie Nelson, and Tompall Glaser. It became the first platinum album ever recorded in Nashville.

Teaming up in the ‘80s with Willie Nelson, Kris Kristofferson and Johnny Cash, Jennings formed the country supergroup The Highwaymen. As his career soared, Jennings struggled with drug addiction, which Colter tried to help him overcome. Jennings died of complications from diabetes in 2002. Colter still plays music today. 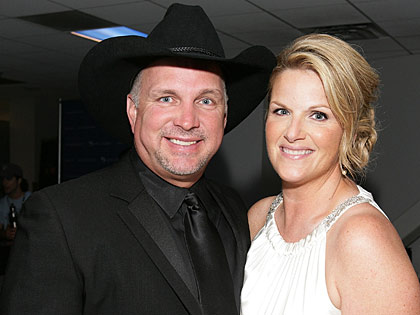 An Enduring Friendship: Garth Brooks and Trisha Yearwood were close for years before they wed in 2005.
Mathew Imaging/WireImage/Getty Images

Trisha Yearwood knew there was chemistry the very first time she ever sang with future husband Garth Brooks. "It felt like we'd sung together forever, she has said about the first duet. Though married to his first wife at the time, Brooks helped Yearwood land her first record deal. In 1991 she hit it big with the hit song "She's in Love with the Boy" and was the first female country music singer to sell 1 million copies of her debut album.

Yearwood's success is impressive — she's a two-time winner of CMA's female vocalist award and has won three Grammy Awards. But Brooks’ achievements are historic. He is the second highest-selling solo recording artist in U.S. history — Elvis Presley is in the first spot  — with sales topping 128 million. According to the Recording Industry Association of America, the Beatles have sold the most albums.

Brooks has always mixed both rock, pop and country influences in his music. In the 1990s he was one of the first country artists to crossover to the pop album charts when No Fences reached the #3 spot. A year later, Ropin’ The Wind topped the Billboard 200 albums charts, the first of 7 number one albums during the decade. As the 1990s closed out, Brooks took a huge gamble, creating alter ego Chris Gaines, a fictional Australian alternative rocker. The album In…the life of Chris Gaines was a blend of new wave and R&B music. Though panned by critics, the move showed Brooks' willingness to reach for new heights and break out of familiar territory.

This same conviction could be said of his relationship with Yearwood. After many years of friendship, Brooks proposed to Yearwood on stage at Buck Owens' Crystal Palace before 7,000 cheering fans in 2005.

Brooks took a long hiatus from recording and touring to spend more time with his three daughters from his first marriage, but he has played a few live shows recently. Yearwood's latest record Heaven, Heartache, and the Power of Love was released in 2007. She finished a recent tour last month. 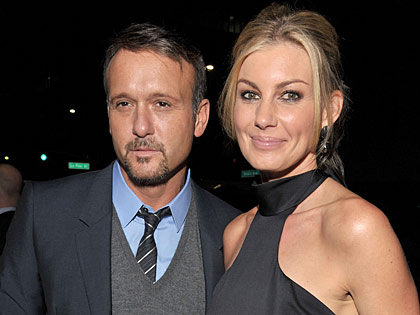 Spontaneous combustion: Tim McGraw and Faith Hill first toured together in the spring of 1996 — by the fall of that year, they were married.
Lester Cohen/WireImage/Getty Images

Arguably country music's most visible couple, Faith Hill and Tim McGraw first played together in 1996 on their Spontaneous Combustion Tour, during which McGraw famously proposed to Hill. She accepted by writing "yes" on a mirror in his trailer while he was on stage performing.

Hill made history in 1993 when her debut single "Wild One" held the top position for four consecutive weeks on Billboard's country music singles chart, a feat that hadn't been accomplished by a female country singer in nearly 30 years.

McGraw began topping the charts in the mid 90's, and by the end of the decade, as his 1999 album A Place in The Sun went triple platinum, he had taken advantage of Garth Brooks’ Chris Gaines miscalculation to become country music’s biggest male star.

In 2000 Hill and McGraw toured together on the Soul2Soul Tour, which became the highest grossing country music tour of all time. McGraw had a starring role opposite Sandra Bullock in the movie The Blind Side, and recently appeared in the film Country Strong with Gwyneth Paltrow. He is currently touring behind his new album Southern Voice. Hill is expected to release a new album soon. 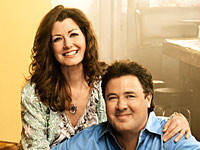 Vince Gill and Amy Grant talk about love and life at 50.