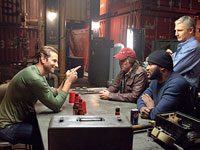 First, here’s what The A-Team, a big-screen remake of the classic 1980s TV series, gets right: Liam Neeson is a pitch-perfect stand-in for the late George Peppard as the team’s resourceful leader, Hannibal Smith.

Likewise, the other Team-sters—Bradley Cooper as the handsome “Face,” Sharlto Copley as the insane flyboy Murdock and martial arts champ Quinton “Rampage” Jackson as the brooding B.A. Baracus—all do justice to their predecessors Dwight Schultz, Dirk Benedict and Mr. T.

And that, dear reader, is about it. After casting did its job, the project seems to have been turned over to a classroom of fifth-grade boys—although I’d like to think the kids would do a better job of structuring a plot, writing some clever dialogue and at least trying to close up some of the plot holes, which are gaping enough to drive a flaming tank through.

I’m honestly sitting here trying to remember what the movie’s plot was: something about stolen engraving plates with which bad guys are going to print up enough fake dollars to destroy the U.S. economy (as if we’re not doing an efficient enough job of that on our own, thank you). The A-Team, an unconventional group of special ops agents, is assigned to retrieve the plates, no matter what.

Story aside, what The A-Team is really about is explosions, tumbling cars and very, very loud noises. It also wants to be about the main characters’ jaunty, cavalier attitude, the thing that made the TV show so much fun. The primary miscalculation by screenwriter/director Joe Carnahan and his co-writers, Brian Bloom and Skip Woods, is in racking up a hefty body count. I don’t recall anybody dying at the hands of Peppard and Company back in the day. Here the baddies take a hail of bullets, and bombs, and fatal trauma—all to the glee of the A-Team heroes, whose cackling delight at the mayhem that surrounds them seems more psycho than silly.

If all this is to signal the audience that this is not your father’s A-Team, the message is cruelly apparent in the film’s mean-spirited misuse of two original series stars, Benedict and Schultz. The production notes state that Benedict plays a prisoner in the film—if so, his appearance was so quick I didn’t see him, even while on the lookout. Schultz is briefly visible as a doctor at a German hospital. Both parts are not even glorified walk-ons; they’re the kind of invisible roles contest participants get in “win a part in a movie” sweepstakes. And this was no charitable gesture for two down-and-out actors: Schultz is one of the busiest voiceover men in Hollywood, and Benedict is currently starring in Prescription: Murder, a stage production based on the pilot for the Columbo TV series.

In a Summer Movie Preview piece I wrote for the current issue of AARP The Magazine, I fell for the studio hype by plugging the Benedict’s and Schultz’s cameos in The A-Team and took a mild shot at Mr. T for not playing along. Well, Mr. T, please pity the fool who questioned your good sense.