AARP’s Movies for Grownups Awards Saturday in Beverly Hills, California was full of big stars making memorable moments as they accepted and presented honors for films made in 2019. 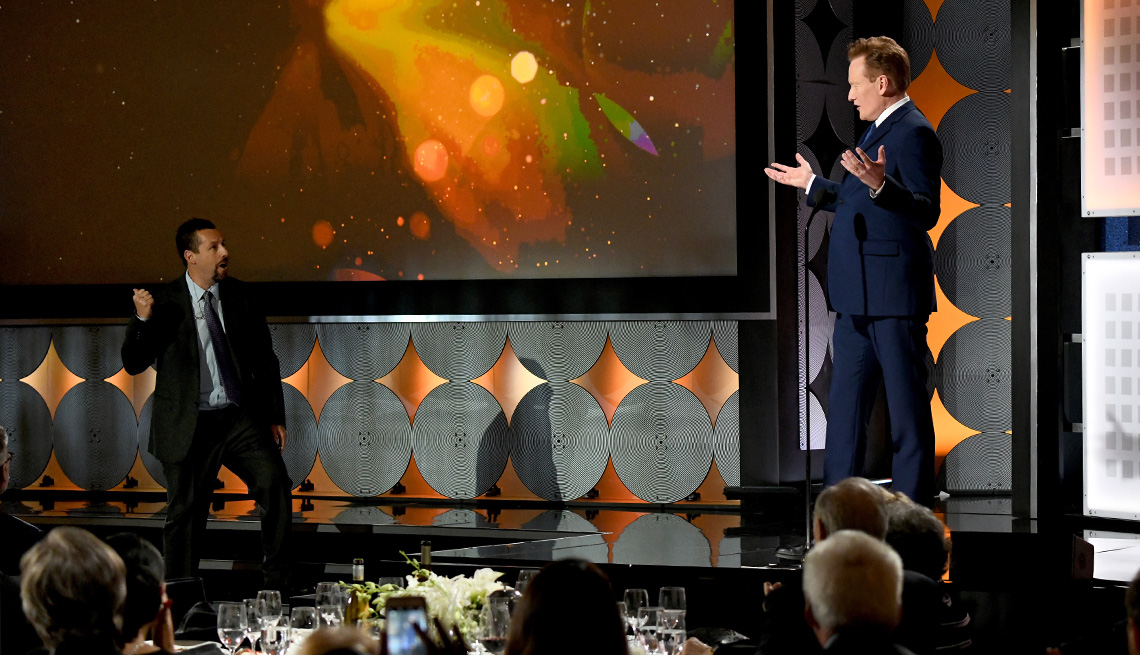 Conan O’Brien’s tribute to his friend of three decades, Adam Sandler, became an impromptu comedy show. O’Brien presented Sandler with the best actor award for his performance as a self-destructive gambling addict in Uncut Gems.

“He is not acting, this movie is a documentary,” O’Brien joked, “and a desperate, desperate cry for help.” When O’Brien announced the award, Sandler immediately got up to collect it but he’d jumped his cue — O’Brien wasn’t done explaining the movie to the audience.

“Don’t come up yet, what’s wrong with you?” O’Brien said in mock outrage, ordering Sandler back to his seat. “You paused!” Sandler protested. “You take pauses in comedy!” retorted O’Brien. “How long have you been in show business? You were like a chimp that saw a banana! You are way too eager for an award!” 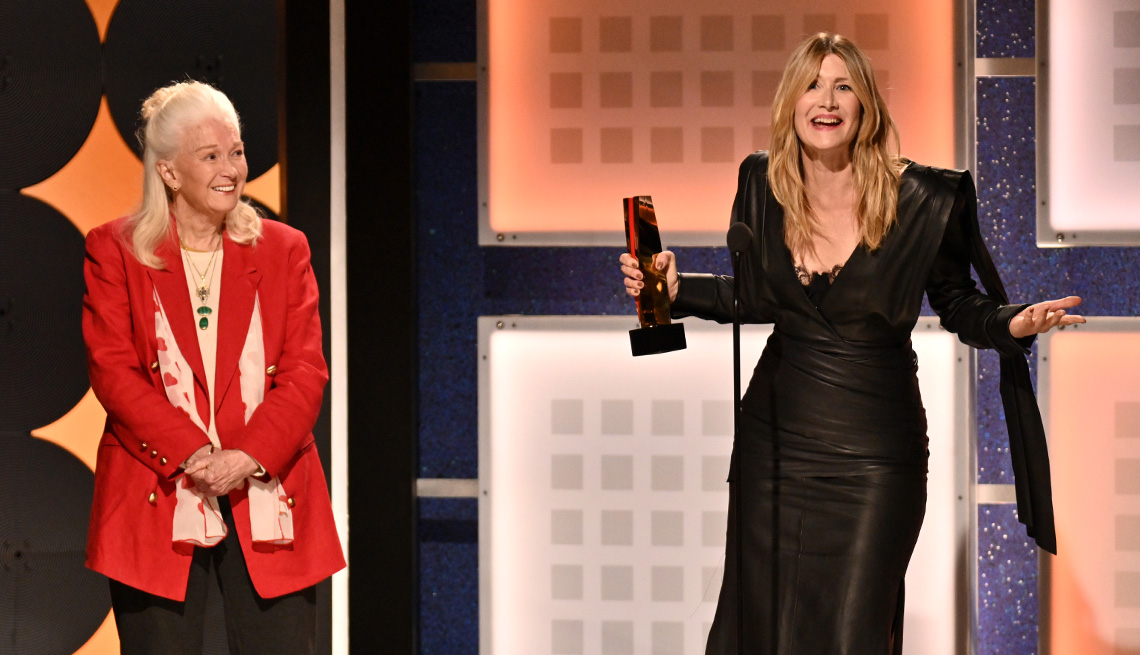 One award involved a moving mother-daughter bonding session. “Four years ago I was privileged to win this [AARP] award, and my daughter Laura Dern surprised me as presenter,” said Diane Ladd, “and now the award is hers, and I get to present to her!” Ladd presented her daughter, whose father is actor Bruce Dern,  the award for best supporting actress as a hard-bitten divorce lawyer in Marriage Story.

Dern returned the love with a tribute to her mom. ”Diane Ladd is my muse. She taught me everything I understand, not only about acting, about being honest and about being fearless.” With such a role model for a long career and a good life, Dern said entering her 50s has been a boon. “I’m having the time of my life — it’s sexy, it’s fun, it’s creative.” 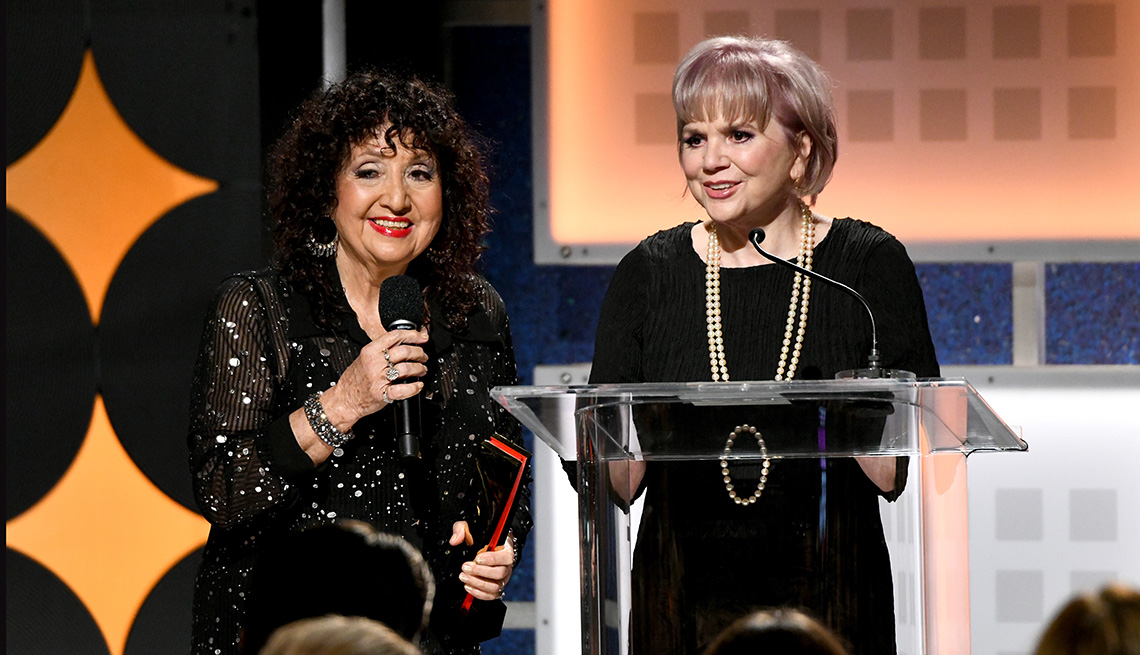 The most thunderous of the evening’s multiple standing ovations was for legendary singer Linda Ronstadt, introduced by Maria “Midnight at the Oasis” Muldaur. Ronstadt accepted the best documentary award for the film about her life, Linda Ronstadt: The Sound of My Voice. “I met Linda in 1967, when we were both young thrushes,” said Muldaur. “In a male-dominated industry, she stood up to the powers that be. Although Linda stopped performing live in 2009, three years before revealing her [Parkinson’s] diagnosis to a reporter for  AARP, her songs, her story, and the sound of her voice continue to inspire.”

Ronstadt said, “In the rock 'n' roll generation we never thought we’d get to be 73. Not everyone has the privilege of complaining about the problems of old age. It’s a great privilege to finally become a grownup, to accept this AARP award honoring movies for grownups.” 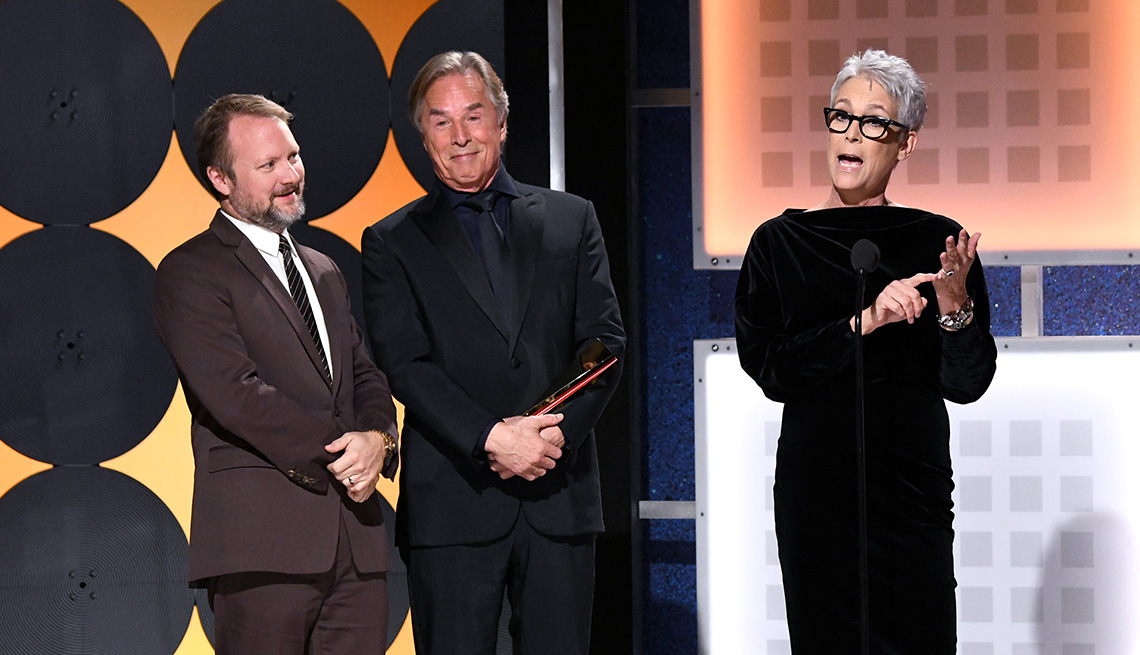 Accepting the best ensemble award with Rian Johnson, director of Knives Out, Jamie Lee Curtis and Don Johnson gave the audience an infectious sense of what giddy fun they had making the murder mystery. Johnson said he took the part because Christopher Plummer was playing his dad. “I got drunk with him once, so it sounded like a good idea.”

Curtis marveled that between them, the Knives Out ensemble has made 772 movies, proving that with creativity, experience counts.  “I am a card-carrying adult,” she said. “I wear it on my face, I wear it in my hair, my body and in my mind…and very deep in my heart. I’m proud to be an adult. The world needs more adults, and the world needs more movies for adults.” 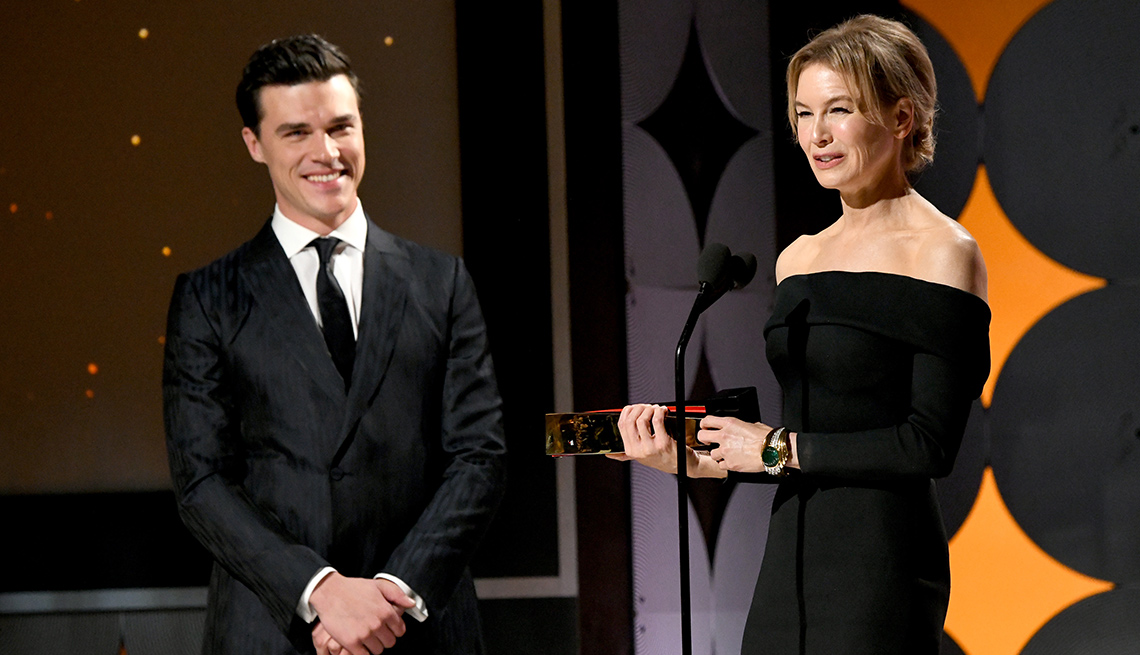 Renée Zellweger’s costar Finn Wittrock, 35, who plays her husband in Judy, presented her with the best actress award for portraying the last months of Judy Garland in the film. “I hope I’m still around when you’re an [AARP] member, so I can clap for you,” said Zellweger. “I’m 50, and I kinda like it. I don’t feel like we’re getting older, I feel like we’re winning, you know?” Like Ronstadt, she noted that being a grownup is a privilege not everybody gets. “You’ve got to dodge a lot of bullets to get to this party, and it’s pretty good!” 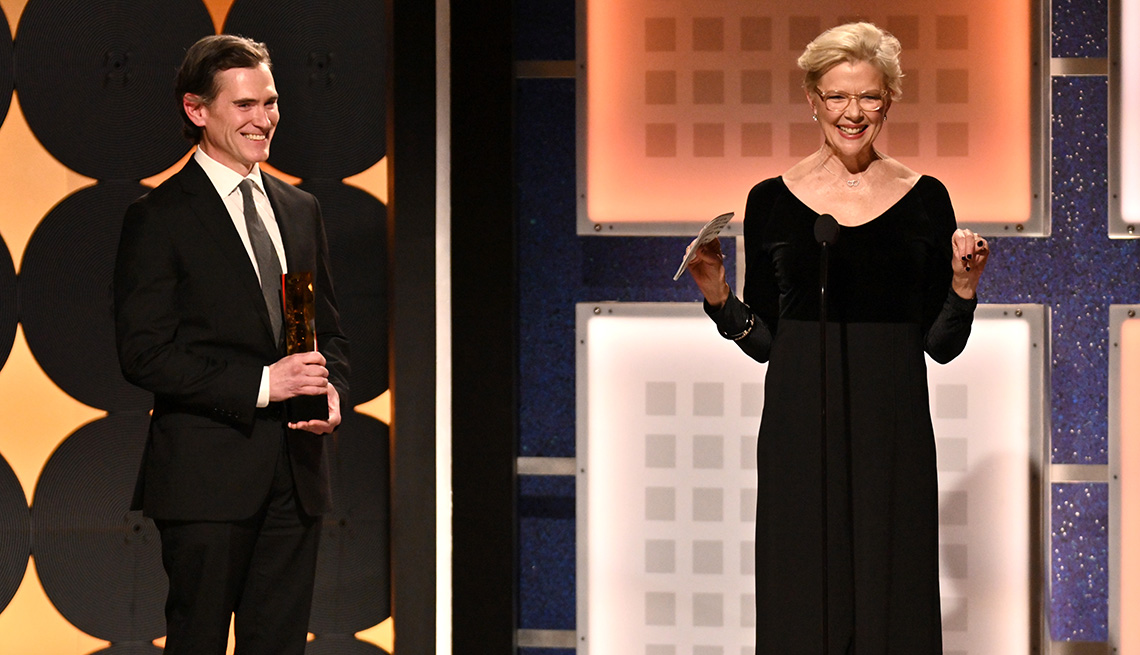 Billy Crudup, who is 10 years younger than his 20th Century Women costar Annette Bening, 61, presented her with the career achievement award, noting that when he was starting out, her stunning breakthrough role as a half-mad con woman in The Grifters was what inspired his career. “I said, ‘That’s the kind of actor I’d like to be,’” Crudup said.

Bening’s husband, actor-director Warren Beatty, beamed at his wife as she accepted the award for a body of work not yet complete, and as she concluded with a quote from Henry James to inspire future actors: “We work in the dark. We do what we can. Our doubt is our passion and our passion is our task. The rest is the madness of art.” 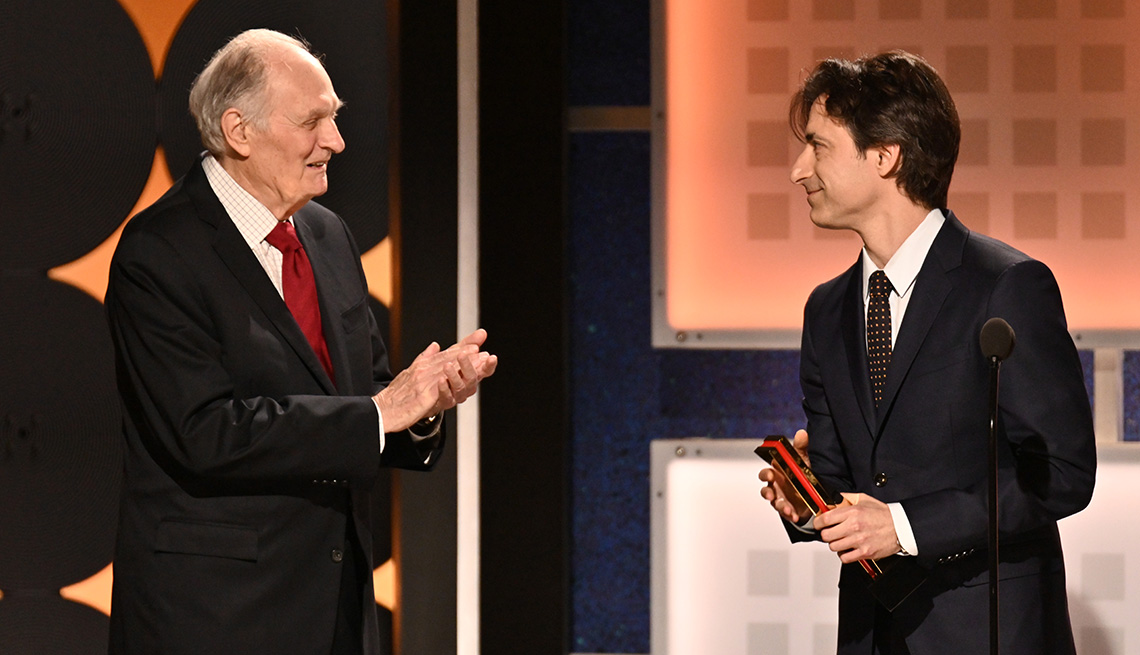 Alan Alda, left, applauds for Noah Baumbach, after presenting him with the best screenwriter award.
Michael Kovac/Getty Images for AARP .

As Noah Baumbach prepared to accept the best screenplay award from Alan Alda, 83, costar of his film Marriage Story, he reflected on his own aging. “I turned 50 a few months ago, and It’s taken me roughly 50 years to appreciate the importance of celebrating things. An award like this is a true reason for celebration, and I want to thank AARP for letting me into the club finally —  I’ve been trying to get in for years.” He said his 2019 movie was about marriage in all of its forms, and thanked “all of our divorced parents: Adam Driver’s divorced parents, Scarlett Johansson’s divorced parents, Laura Dern’s divorced parents, my divorced parents, our stepparents, and all of our ex-husbands and ex-wives.” Alda joked that after 62 years of marriage, he’s never considered divorce, “but my wife has considered murder.”

Watch: Kasi Lemmons, winner of best time capsule movie for 'Harriet,' talks about the need for diversity in films.

Kasi Lemmons accepts the award for best time capsule movie for 'Harriet.'Kasi Lemmons, writer-director of Harriet, winner of best time capsule, called the film’s hero — escaped slave Harriet Tubman — “One of the baddest black women to ever walk the earth.” She continued, “Movies give us the ability to travel in space and time [so] that we can feel her hand reaching out across time, asking if we have the courage to save ourselves, to change the world.” Presenting Lemmons’ award was Khari Wyatt, a descendant of Harriet Tubman. “Aunt Harriet was a woman ahead of her time, selfless, persistent, caring, shrewd, bold, humble, dignified, with a power beyond measure.” Lemmons said she wants to give future generations the kind of film that “captures both our frailty and our magnificence.” 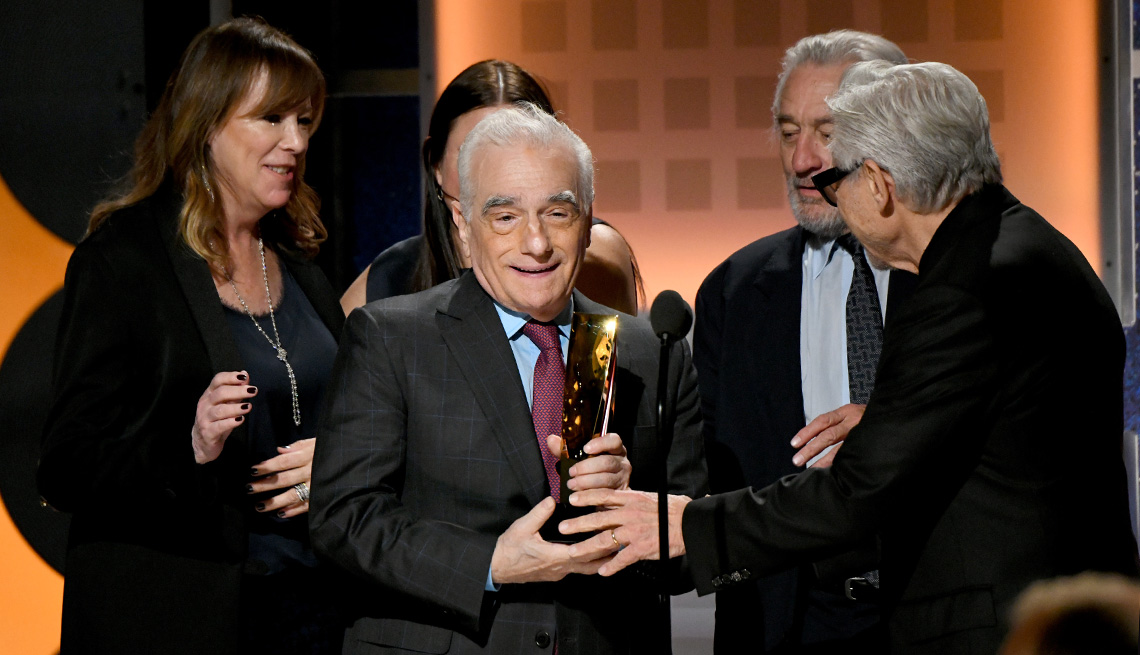 Among the most emotional moments was the tribute to Martin Scorsese, who won both the best movie for grownups and best director awards. Actor Harvey Keitel, who got his big career break 47 years ago in Scorsese’s Mean Streets, presented the award for Scorsese’s The Irishman, which stars Robert De Niro, Al Pacino, Joe Pesci and Keitel. “I am honored to stand up in front of you grownups,” said Keitel. “You have no idea how hard Marty and Robert and I have worked to become one of you.” Scorsese praised the de-aging technology he used in the film that permitted the stars to play themselves years younger in flashback scenes. “Everybody said, ‘Get younger actors [for the flashbacks],’” said Scorsese, but the de-aging technology meant he could make the film a historic reunion of his great actors, “instead of having young people who don’t know what it was like when they heard President Kennedy was shot. I think it was something pretty special for all of us.” And for grownup film fans everywhere. 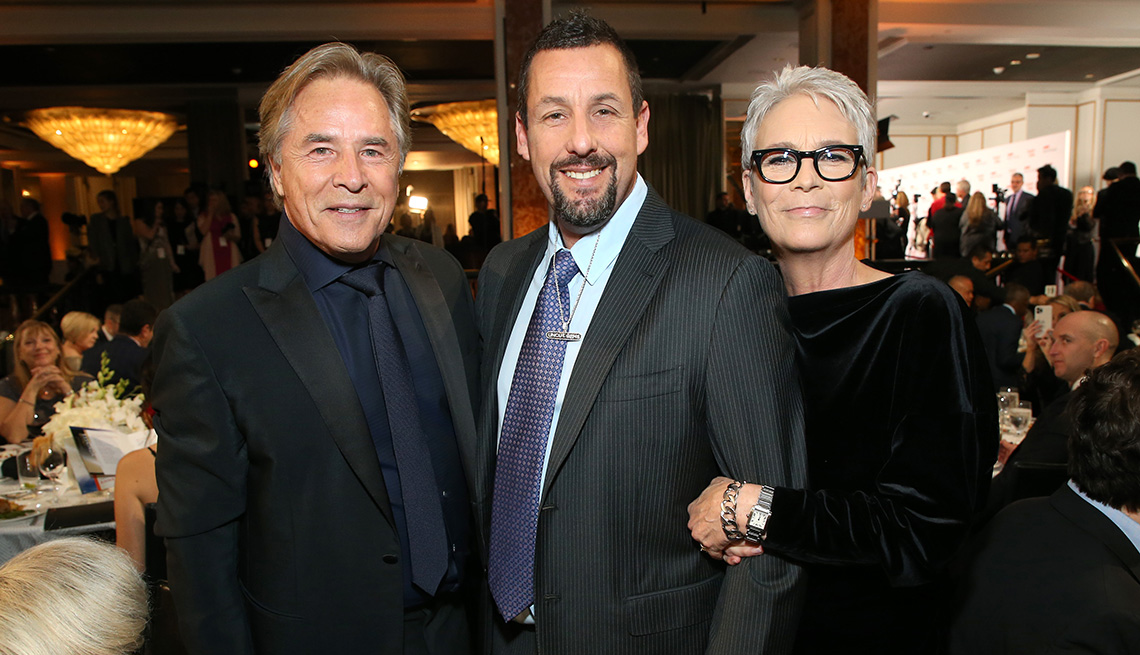 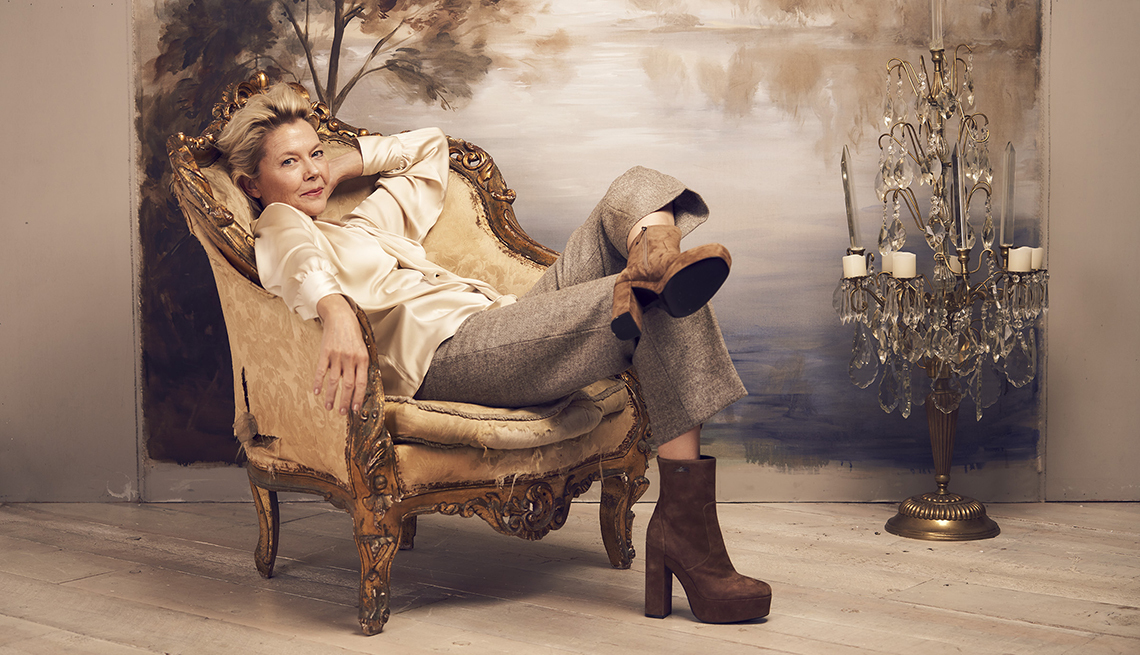 Getting Up Close With Annette Bening

Movies for Grownups Career Achievement Award winner talks life, family and how she is still evolving