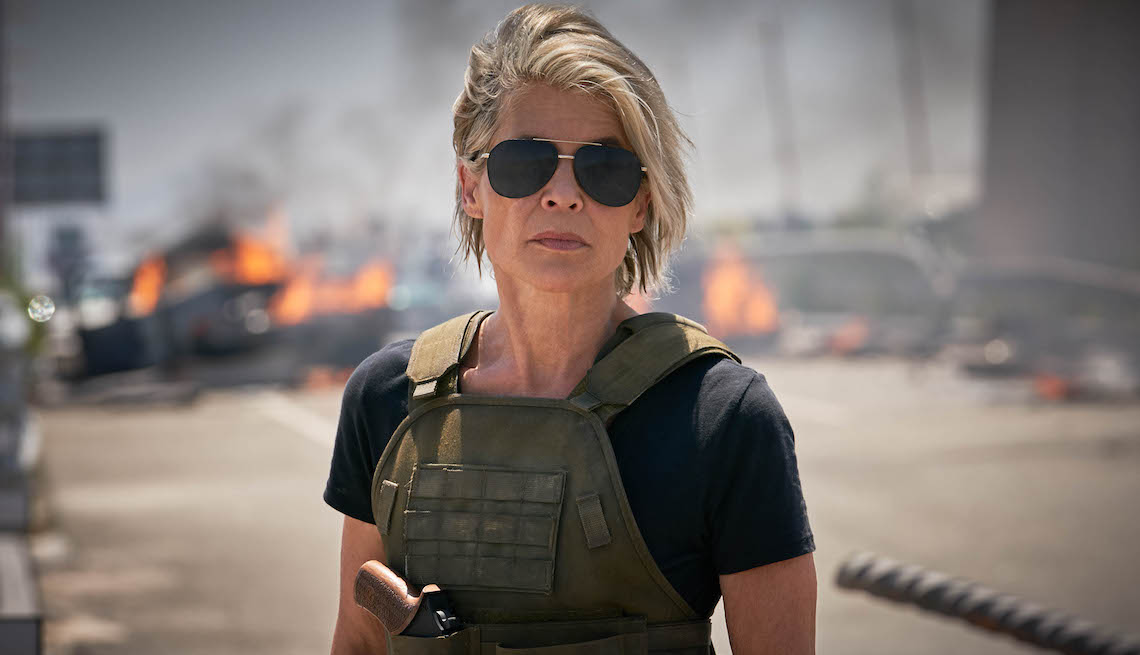 Hollywood is rife with female action heroes nowadays, but Wonder Woman, Black Widow and Danaerys Targaryen with all her dragons couldn't beat their two-fisted forerunner: Linda Hamilton in the $1.8 billion Terminator series, in which her pretty-waitress character Sarah Connor became a buff, tough, indomitable warrior who unleashed today's legion of young superwomen. “That was just sort of an accident of timing,” says Hamilton, 63, who takes center stage alongside her 1984 costar Arnold Schwarzenegger, 72, in the new Terminator: Dark Fate. “But it's kind of wonderful."

When Hamilton first sparred with Arnold in 1984, she was known as a soap-opera ingenue, and from 1987-90 as the TV beauty in Beauty and the Beast. But Sarah's mighty-bicep'ed transformation supplied the drama that made Terminator 2 a rare sequel that's a bigger hit than the original.

And now she's doing something even harder: playing an action heroine who's a grownup, not a 20-something ingenue. “I was the woman that made it OK to be a strong woman, and now I get to be a woman that makes it OK to be a strong older woman,” says Hamilton. “I was curious about playing her as a woman of a certain age. I'm so much deeper and richer in life experience than I was 30 years ago.” Sarah Connor is different, too. “She's an outsider, more on the fringe than ever. She's breathless. It's a painful, painful place to go. I just did some of the most painful work I've ever done. I find my best places of loss and sorrow and start from there."

Hamilton doesn't see why women should lose roles just when they're getting good. “Hollywood — reflecting America — is obsessed with eternal youth. It's infuriating to people like me, who couldn't care less about the outside of people. I'm trying to meet the inside. It's almost impossible to not buy into it to some degree, like, ‘Oh, my God, I look so old!’ I really try to shred all that kind of thinking, just completely ignore that voice that says I have to look young or I have to be totes thin. I refuse to buy into that.

"Why can't I be Clint Eastwood and all the action heroes, the Charles Bronsons, that get to go on forever? Why shouldn't I be?"

Hamilton thinks you don't have to be a screen superhero to learn from Sarah Connor's example — you can learn from Linda Hamilton. “You never really know what you're capable of until it's demanded of you, and it's like, ‘Wow!'” she says of her physical transformation in her 60s. “I don't think I ever knew how fierce I could be — it was a great self-discovery. We used to say, ‘I want Linda Hamilton arms’ is one word: Iwantlindahamiltonarms!'”

Which was tougher to achieve this time around. “I'm an older woman and I really have no interest in looking the same, but I did want to make sure that I looked like the fierce warrior, even if it's the fierce warrior 27 years later. So I trained just as hard as I could with a trainer in New Orleans. I was afraid I was going to get some young punk who's like, ‘You can do it, you're Sarah Connor!’ and then take me to the hospital. But he was a scientist of the body in motion. I put on muscle and leaned down. It's very hard to build muscle mass without hormones, and my hormone count is zip."

Hamilton has three recommendations for fans who want lindahamiltonarms: “Diet. Diet. Diet. You know the body just loves making fat and the body doesn't want to shed fat. So I cut out the carbs, cut out the sugars. I didn't even have fruit for months and months on end to pull out of insulin resistance.” She adds three more words of advice: “Just keep moving."

"I'm in better health because of doing this role, definitely,” says Hamilton. But she knows she had one advantage her fans lack. “When I was considering the role, my sister said, ‘Won't it be great to get in shape again and have somebody else pay for it?'"