VIDEO: A Los Angeles detective seeks out the ruthless gang that stole his dog.

Rating: Not yet rated

It’s good to have Bruce Willis back in a lead role as a wiseacre private eye, though this shambling shaggy-dog story about a kidnapped pooch is like a stoned student film with major stars, or a cross between Inherent Vice and The Big Lebowski.

Written by Mark and Robb Cullen, its closest resemblance is to the mirthless 2010 Lethal Weapon ripoff they also wrote, Cop Out, with Willis and Tracey Morgan. This new film is more entertaining than Cop Out, though. And like very low-grade medical marijuana, it does produce a small, steady buzz if you give its 94 minutes the right WTF attitude.

Hey, pelt me with tomatoes, but it made me smile. I’m pleased to see that at 62, Willis is in sensational action-star shape — as we deduce from his nude skateboard escape from homicidal thugs, past boho bars and galleries and around the Venice Beach canals. When he’s caught by his old cop buddy, wherever is the cheeky dick going to stash his gat? (One guess.) Cross-dressed, he gets chased by transvestites and stomped by thugs, among other adventures. 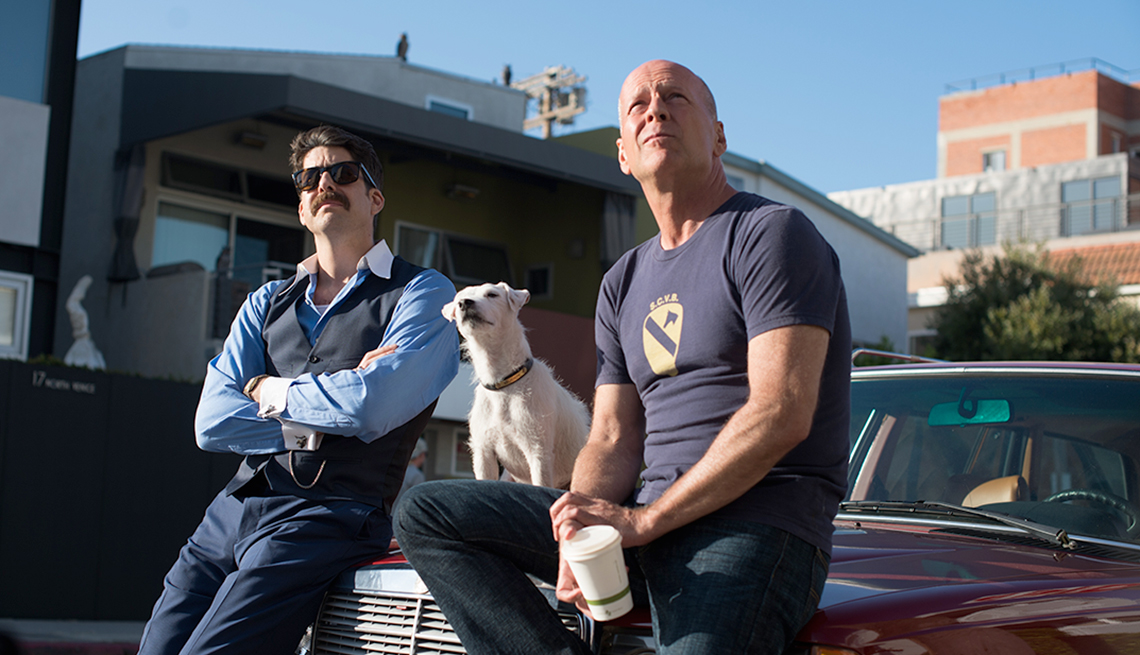 The screenplay struggles to concentrate on the chase for Willis’ constantly abducted dog, but the chase has no sense of direction, nor do the Cullens. They keep stepping on their own gags, starting with the opening scene, where the hardened youths Willis lectures on the perils of hookers and blow turn out to be little kids.

The big cast is mostly squandered in parts that can go by quick as a streaking neutrino: Famke Janssen as Willis’ sister; Kal Penn as — wait for it — a convenience store clerk; Adam Goldberg as a pinchpenny money man. But if you like Thomas Middleditch’s artful awkwardness on Silicon Valley, you’ll like it here, too. Standouts are Game of Thrones’ Jason Momoa as a tenderhearted yet homicidal coke dealer named Spyder and John Goodman, on a roll lately with the Roseanne reboot (though he just told AARP he hopes to scale back his career — let’s hope not). He plays Willis’ best bud, a surf-shop guy getting fleeced in a divorce, self-medicating with more ganja than the Dude ever dreamed of.

Since it’s about an aimless parade of slacker losers, in a way it’s cool that the film earned an unheard-of zero percent on Rotten Tomatoes, making it the most critically loathed film in the careers of everyone concerned. It’s Mark Cullen’s directing debut. This guy is going nowhere but up!