After all, how much mileage could a movie expect to get from its plot about three law-abiding seniors engineering a bank robbery?

But then the gem of a script by Theodore Melfi (Hidden Figures, St. Vincent) kicks in. Before we know it, we're not just invested in these appealing characters — we're their coconspirators.

Lifelong pals Joe (Caine), Willie (Freeman) and Albert (Arkin) are a trio of retirees just barely squeaking by on their pensions when the steel company where they spent their careers delivers some bad news: It's moving overseas — and using the assets remaining in its pension plan to pay off its debts. Adding insult to injury, the bank that issued Joe a predatory loan and is now foreclosing on his house is the same one making millions from liquidating the pension plan.

When Joe serendipitously witnesses a bank holdup, a notion is born: Why not rob the unscrupulous institution of the money that is rightfully theirs — and not a penny more?

Even if they get caught, Joe reasons, "We get a bed, three meals a day, and better health care than we get now."

Going in Style bubbles with subversive observations like that, picking at the emotional scabs that still itch most Americans a decade after criminally negligent bankers nearly destroyed the economy — and did crush the savings and dreams of millions of people. 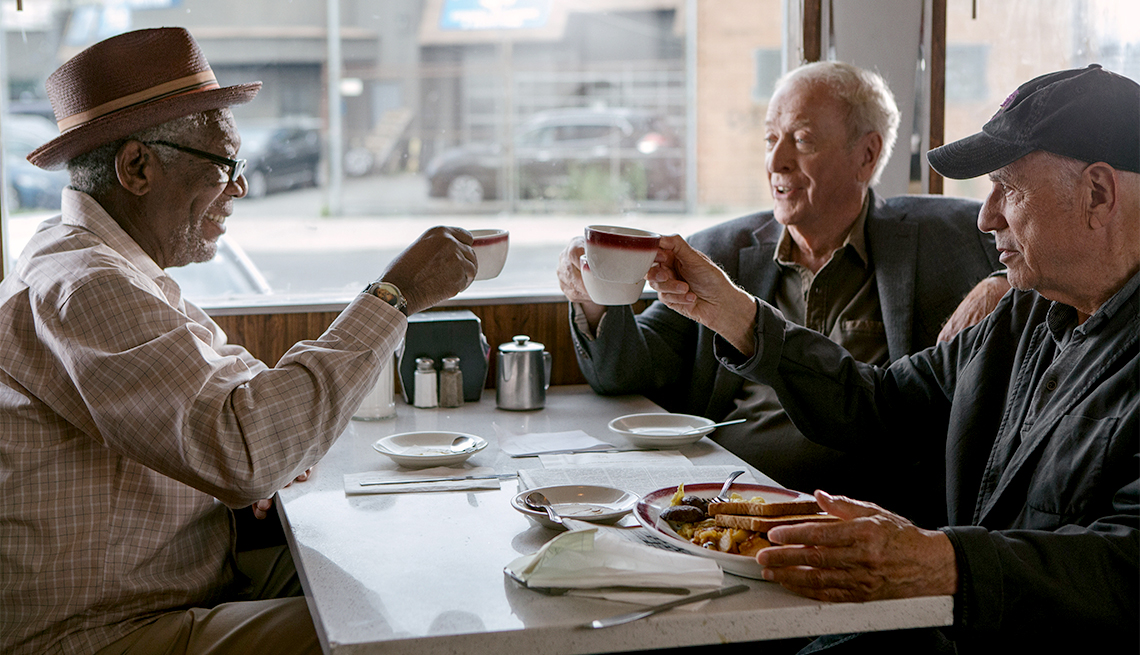 But director Zach Braff (Garden State) sweetens that pervasive bitterness with the spectacle of the three friends' trying to insinuate themselves into the criminal underworld. They seek out an actual crook (John Ortiz) who will help them formulate a plan that takes into account their age-related limitations. Oscar winners all, Freeman, Caine and Arkin add unexpected pathos to their characters; the inevitable jokes about getting old come off as good-natured sighs of acceptance. The film's requisite romance — between Arkin and a supermarket worker named Annie (a radiant Ann-Margret) — carries the sweet tentativeness of a high school crush. (And when the flames of passion ignite, it's in a wholly endearing manner.)

It's enlightening, not to mention great good fun, to revisit the film on which this one is based: The 1979 version of Going in Style starred Oscar winners George Burns and Art Carney, as well as one of the screen's greatest actors, Lee Strasberg. The way writer-director Martin Brest told that earlier story was considerably darker, however: The trio planned the bank heist largely due to their resentment of a society that had diminished older people, virtually warehousing them in their later years.

Despite the grim socioeconomic themes that lurk beneath this 2017 iteration, the world of Joe, Willie, Albert and Annie is, in the end, a better place. Yes, the banking system has betrayed them, but the original movie's sense of elder isolation is absent: Joe has a thriving relationship with his daughter and granddaughter, who share his abode; Albert teaches saxophone to children (and has that hot affair going with Annie); and although Willie lives alone, he keeps in close touch with his daughter via Skype.

With a support network like that, we know from the start that Going in Style is headed for a happy ending.