After roles in Harry Potter and Batman movies and other hits that obscured his past as the most promising art-flick actor of his generation, the Oscar is the award Oldman is going for with his volatile, mumbling, bellowing, sozzled, amusing and amused, tormenting and tortured, defiantly exuberant performance as the man who beat Hitler. And every major pundit who regularly talks with Academy voters says no Oscar is likelier to happen this year than his.

What distinguishes Darkest Hour is that it’s a film based on words: the three famous speeches Britain’s prime minister rallied the world with in 1940, when 3 million Germans blitzed on amphetamines prepared to obliterate Brit troops at Dunkirk, France, then hop the Channel to plant the swastika forever, and Churchill roared, “We shall fight on the beaches… we shall never surrender!” Dunkirk has soldiers read Churchill’s incendiary speech aloud from the newspaper, but Darkest Hour puts you in his shoes in the cramped confines of the House of Commons, a combat zone where the shouts seem less sinister than the stony silence of political enemies. It’s not just rah-rah patriotic cliché — you feel the tense peril, the courage against high odds, the weight of words that changed the world by changing one desperate heart at a time. 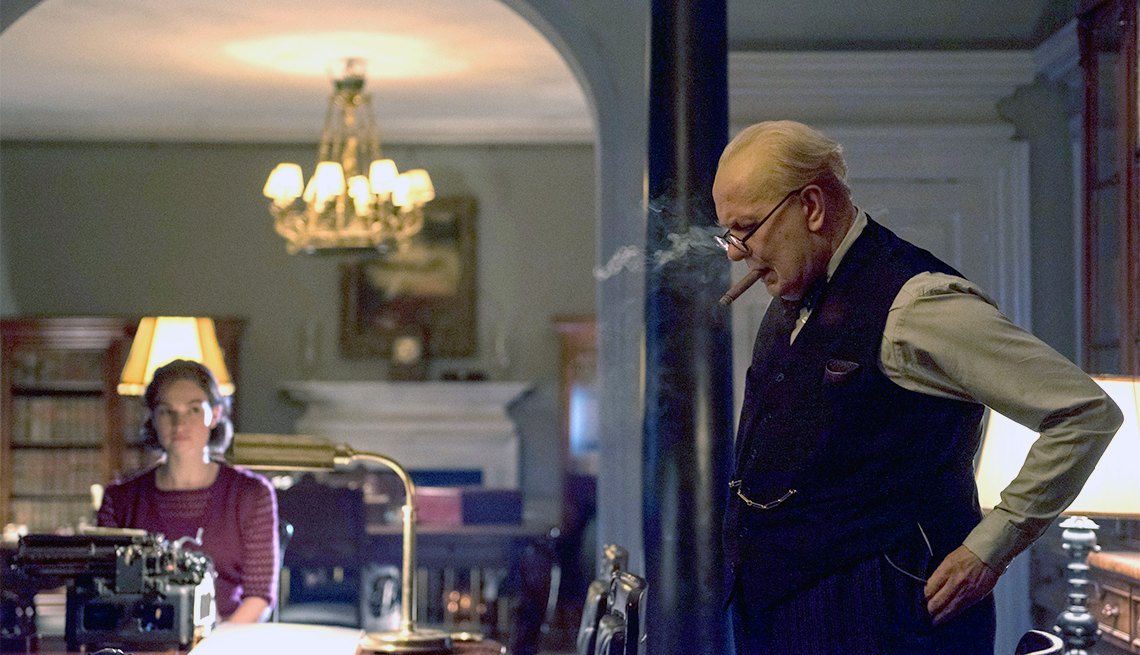 Not that the imagery isn’t stirring. too — the cinematographer is four-time Oscar nominee Bruno Delbonnel (Amélie). Director Joe Wright, 45, already staged Dunkirk in 2007’s Atonement at least as well as Christopher Nolan did this year, so this film concentrates on the home front: jittery citizens staring up through bombed-out buildings that frame their terror, Churchill’s stricken face conveying the fear behind the public bravado. Nolan's and Wright's latest films make a perfect pair, one cerebral and visual, the other passionate and verbal — as Wright says, “Darkest Hour could be sold with Dunkirk as a boxed set.”

This Churchill doesn’t start out powerful. He’s the despised oddball loser responsible for World War I's Gallipoli disaster, drunk and irritable at breakfast, defying the upper-class twits — Prime Minister Neville Chamberlain (Ronald Pickup) and the slyly reptilian Viscount Halifax (Stephen Dillane) — who have the upper hand and plan to surrender to Hitler. Only political deadlock accidentally causes his appointment to the most important job on earth at the seemingly washed-up age of 65. Then begins the barrage of orotund oratory. It’s a war of words, dramatized with theatrical flair, and the Surrender Brits seem more menacing than the Germans. Oldman rises exhilaratingly to the occasion, while suffering in private the most soul-scarring doubt in the cause he champions with such uncanny persuasiveness.

In what should be a nothing role, Oscar nominee Kristin Scott Thomas, 57, makes Churchill's wife, Clementine, an indomitable, vivid figure in amazingly few scenes. As King George VI, Emmy winner Ben Mendelsohn (Bloodline), every inch the great actor that Oldman is, makes you forget all about Colin Firth and focus on the emotional duel that ends with the deeply self-doubting King Bertie as Churchill’s vital ally.

Writer Anthony McCarten (The Theory of Everything) is great at fitting history into heroic formula drama, and Wright (Anna Karenina) has a gift for propulsive storytelling. He also has the weakness of staginess, so he won't likely collect an Oscar himself. Yet his vices are also his virtues: The not-historically-accurate scene where Churchill descends into the Underground and chats with ordinary Britons is totally on the nose, an obvious contrivance, with Churchill quoting Macaulay's rousing poem "How can man die better / Than facing fearful odds" and patriotic citizens chiming in with the next rousing lines. What a crock of audience manipulation. And how well it works!

Still, nobody in Hollywood is raving about the movie the way they're raving about Oldman. He invested blood, toil, tears, sweat and over 220 hours in prosthetics and makeup devised by Kazuhiro Tsuji (who will likely win an Oscar on his third nomination). Oldman dld what one rival says Churchill did: "mobilized the English language and sent it into battle.” And won.