Exclusive First Look: Get Down With a New Duckumentary

Since 1934, the Federal Duck Stamp has raised some $800 million. (All bird hunters must purchase the $25 stamp, with a whopping 98 cents of every dollar going to protect wetlands.) The Million Dollar Duck, produced by two-time Oscar winner Mark Jonathan Harris, reveals the untold story of the artists who compete feverishly each year to have their work featured on the stamp. It’s available on Digital HD and Video on Demand beginning this week, but here’s a clip, exclusive to Movies for Grownups, for anyone who loves spectacular nature photography. 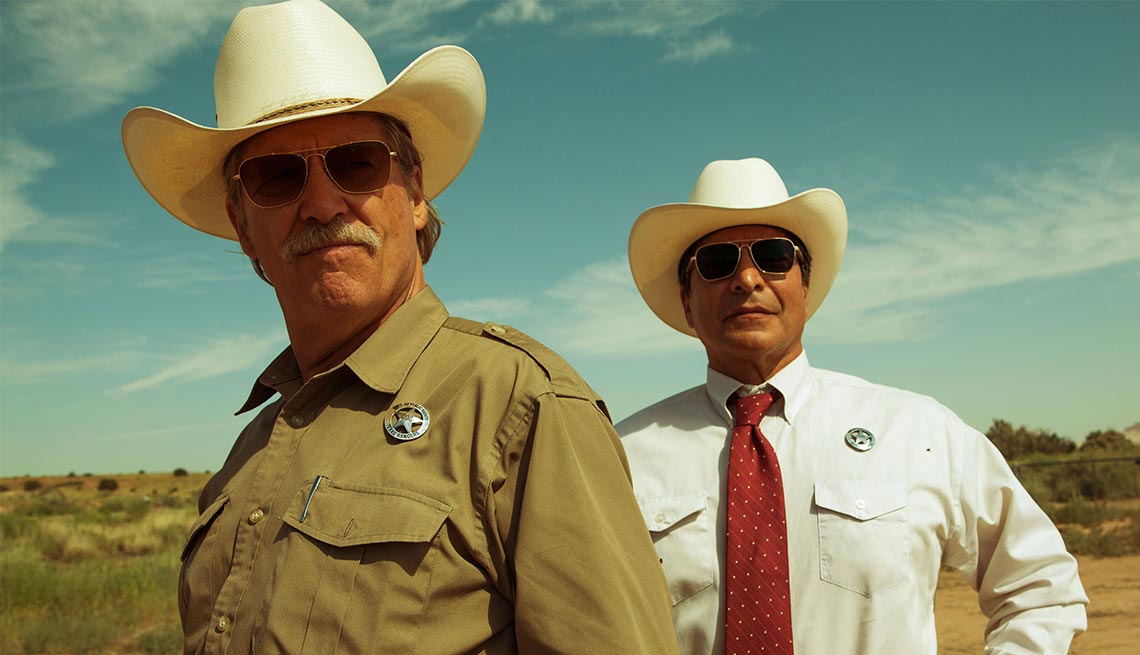 Jeff Bridges and Gil Birmingham in Hell or High Water"

Must Jeff Bridges single-handedly keep the Western movie star alive? First came his Rooster Cogburn turn in True Grit, then his Oscar-winning performance as a New Mexico country singer in Crazy Heart. This week he stars in Hell or High Water, the nail-biting tale of a Texas Ranger (Bridges, shown here with costar Gil Birmingham) on the trail of two bank-robbing brothers (Chris Pine and Ben Foster). The handsome young stars get most of the screen time, but Bridges, peering from behind his shades and plodding along in patient pursuit, is always on our mind.

First Look: Is Tom Cruise Too Big a Reach as Jack Reacher?

The face of his 6-foot-5 action hero Jack Reacher, writes novelist Lee Child, looks like “it had been chipped out of rock by a sculptor who had ability but not much time.” No one would describe pretty boy Tom Cruise that way, but the star takes his second turn in the role Oct. 21 in Jack Reacher: Never Go Back. Fans of the books may still be skeptical, but in this first-look trailer, you gotta give Tom credit for working that Mr. Tough Guy look.

In a summer when movies labor overtime to win us over, here come Meryl Streep, Hugh Grant and director Stephen Frears (Philomena), making it look easy as they enact the funny and sad true story of a 1940s Manhattan socialite who bought out Carnegie Hall to give a one-woman singing recital. The hitch: No one dared inform her she could not sing a note.

The 1977 Disney original starred Helen Reddy and Mickey Rooney. This remake’s got Bryce Dallas Howard and Robert Redford. That may or may not be an upgrade, but the dragon’s definitely more impressive this time around.

Tom Hanks provides all the fun as a struggling U.S. businessman who travels to Saudi Arabia in a last-ditch bid to sell new technology to an Arab monarch.

Last Days in the Desert

Talk about artistic reach: Ewan McGregor plays both Jesus and Satan in this speculative account of what happened during the Man from Galilee’s 40-day desert ordeal.

Russell Crowe is a Pulitzer-winning author who left his young daughter’s life when he fell seriously ill; Amanda Seyfried is that troubled daughter, all grown up now but with problems of her own.

Woody Allen’s latest, the story of a young New York man (Jesse Eisenberg) eager to remake himself in 1930s Los Angeles, starts out as a love letter to the Golden Age of Hollywood, then morphs into a meditation on life choices and regrets.  FULL REVIEW

Ellen DeGeneres leads an A-list of veteran stars giving voice to the endearing aquatic characters in Pixar’s latest animated masterpiece. There are laughs aplenty, but also — as in every Pixar epic — moments of poignance and beauty. FULL REVIEW

The friendship of two Brooklyn teens is torn asunder by their feuding parents. Greg Kinnear is outstanding as a conflicted dad. FULL REVIEW

The Little Prince (Theaters and Netflix)

This live-action version of the 1967 Disney cartoon is as close to Kipling’s literary classic as Angry Birds is to Audubon’s Birds of America. Still, the computer animation is jaw-dropping, and Bill Murray enjoys himself as the voice of Baloo the Bear.

Haven’t they run out of places “where no man has gone before”? Uh, no: In the 13th big-screen adaptation of the 1960s TV series, Captain Kirk (Chris Pine) and Mr. Spock (Zachary Quinto) find themselves stranded on an unknown planet.

Mean-spirited. Derivative. Sloppily slapped together. In other words, just the thing to attract millions of 14-year-old boys — who, 30 years from now, will watch it with their own kids and cry out, “What was I thinking?!” FULL REVIEW