(Video) Me Before You Movie Trailer: A girl in a small town forms an unlikely bond with a recently paralyzed man she's taking care of.

En español | Ethical question: Would it be considered insider trading for a movie critic to rush home from a preview of the new weepie Me Before You and buy shares of stock in Kleenex?

A first-rate tearjerker in the tradition of The Notebook and Ghost, Me Before You offers a cast — young and old — who nail their parts in a tale of love and misfortune. Based on the bestselling novel by JoJo Moyes, the movie moves briskly enough to earn its tears without wallowing. It even provides some hearty laughs along the way.

As the film opens, things could not be going much worse for dashing young British businessman Will Traynor (Sam Claflin, from The Hunger Games). Injured in an ironic accident (opting not to ride his bicycle in the rain, he's run over by a motorcycle), Will spends his days in a motorized wheelchair, staring glumly out the windows of his spiffy converted carriage house next to the Windsor-like estate owned by his parents (Charles Dance and Janet McTeer).

Into Will's life bops an ever-smiling, eternally bouncy young woman named Lou (Game of Thrones heroine Emilia Clarke), hired by Mom and Dad to, well, just hang out with the sad-faced Will, it appears. At first we think she's there expressly to help pull him out of his funk, but soon we learn that Will plans to head for Switzerland six months hence, where he means to commit suicide.

Does Lou lift Will's spirits? Oh, yeah. Do Lou and Will fall in love? The trailer gives that away. Will she change his mind about his six-month date with death? That's the question that drives the film's second half, skillfully orchestrated by first-time director Thea Sharrock. 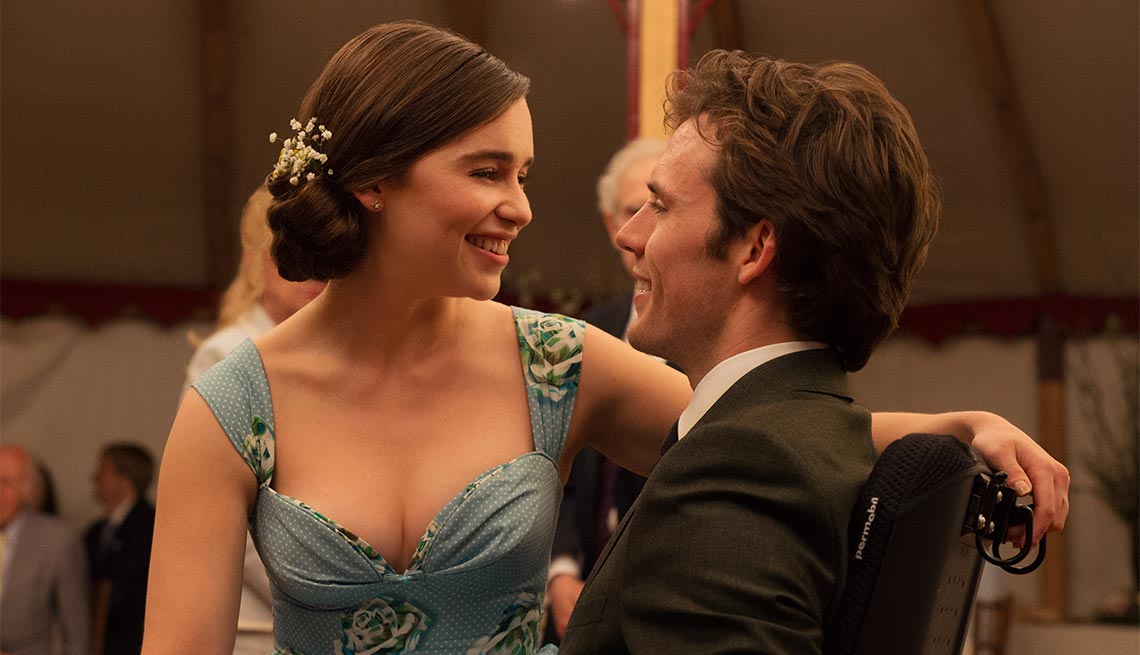 Emilia Clarke and Sam Claflin in "Me Before You"

As you'd expect, the two gallivant about in a series of adventures possible only in movies where the super-rich salve their wounds by blowing lots of cash. (Case in point: What do you do when your motorized wheelchair won't fit inside the first-class cabin of a commercial airliner? Why, take the family's private jet to the Caribbean, of course.) But director Sharrock makes fine use of the movie's quieter moments: In one especially affecting scene, set during the wedding of Will's former girlfriend, the pair dance with Lou sitting on Will's lap. We see both faces in extreme close-ups 20 feet high, their eyes searching for unspoken truths. In a summer of computer-generated robot clashes and apocalyptic mayhem, it's a moment that confirms what true film lovers have always known: No special effect can compare with the human face.

Clarke, with her radiant spirit, and Claflin, with his winning smile, seem genetically engineered for long careers as a recurring movie couple. (I have yet to figure out, though, how Clarke makes her eyebrows dance across her forehead like that.) Dance and McTeer are affecting as Will's distraught parents: McTeer, in particular, evokes the exhausted, perpetually haunted manner of a mother tortured by the prospect of losing her son. And it's really nice to see Brendan Coyle — the long-suffering manservant Mr. Bates of Downton Abbey — step into the present day as Lou's loving but pragmatic working-class dad.

As the story rolls to its foregone conclusion, frequent criers in the audience will bawl like babies. Their thoughtful companions will pat them gently on the back, racking up Relationship Points for sensitivity. It's a ritual as old as the movies themselves, and Me Before You wrings emotions from the audience with the best of them.

I'll take my chances with the Securities and Exchange Commission. What's the ticker symbol for Kimberly-Clark again?