(Video) Manchester by the Sea Movie Trailer: An uncle is forced to take care of his teenage nephew after the boy's father dies.

Fiercely human, bravely unsentimental and at times unnervingly hilarious, Manchester by the Sea washes over you, tossing and tumbling its disparate elements like a wild, bracing surf.

Casey Affleck plays Lee, a troubled Massachusetts janitor who is asked to take custody of his orphaned nephew. Affleck is an uncommon actor whose seemingly still face nevertheless transmits, as if by telepathy, profoundly explicit notions of sadness, panic and even occasional joy. Supported by an exceptional cast — including Oscar shoo-in Michelle Williams as Lee's ex-wife, Randi — Affleck paints a picture of a man paralyzed by his nightmarish past, yet driven by decency to overcome it for the good of others. It's a quietly monumental performance.

A lifelong fixture of the Massachusetts fishing community that lends the film its name, Lee has gone into self-imposed exile following a tragedy that is explained to us only after we have become undeniably fond of this awkward, monosyllabic handyman. The sudden death of his brother, Joe (Kyle Chandler, seen in flashbacks as a loving, reassuring soul), brings Lee back to town, where a family attorney informs him he's the only relative available to care for Joe's teenage son, Patrick (Lucas Hedges).

Under the expert direction of writer-director Kenneth Lonergan (You Can Count on Me), the relationship between uncle and nephew unfolds delicately. In the best coastal New England tradition, the men of Manchester, young and old, confine their expressions of emotion to fishing expeditions and Bruins games. In time, though, we tune in to the rhythms of life in the village, and to the mental states of characters who find humor in the curses of an aggravated spouse but grief at the sight of a frozen chicken. 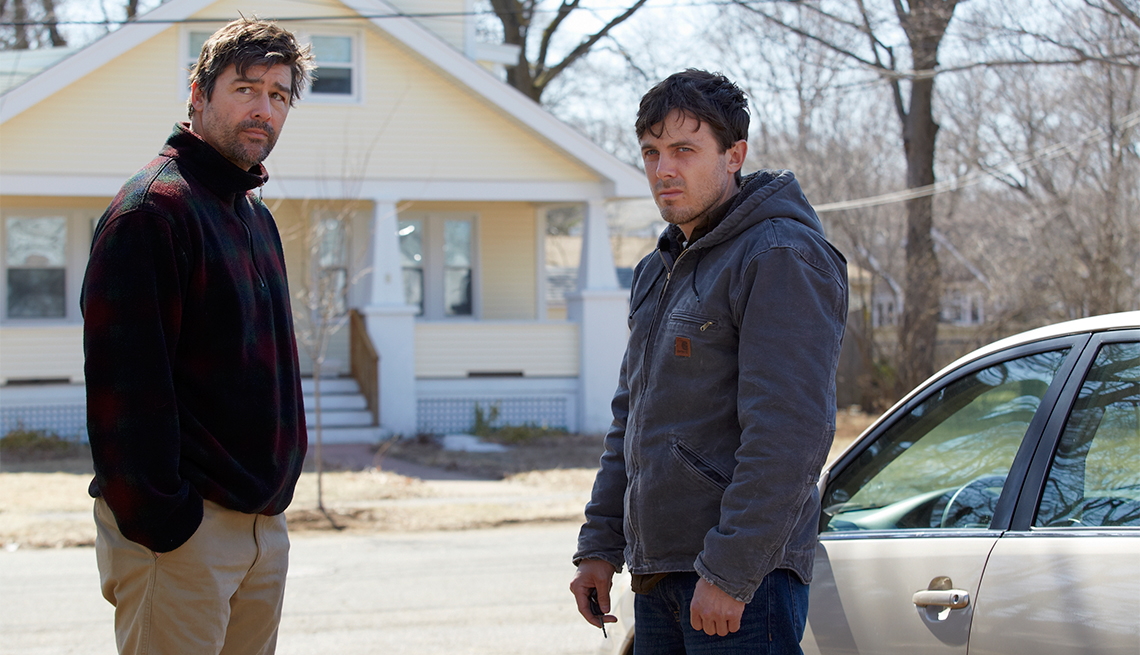 Kyle Chandler and Casey Affleck (as brothers Joe and Lee, respectively) in "Manchester by the Sea"

Such currents of comedy and tragedy course through all 137 minutes of Manchester by the Sea. The deadpan byplay between Lee and Patrick, even in the unlikely precincts of a funeral home, provides a surprising bounty of laughter, as do Lee's hapless efforts to engage a single mother in conversation while Patrick and her daughter attempt a fumbling romantic episode upstairs. Scenes like these coexist seamlessly with moments of searing despair — a reminder that we cannot curate our lives into states of discrete sadness or joy.

Through it all, Lee does everything he can to vanquish the black hole of self-loathing at his core. In a lesser movie, he would find redemption through his determination to rescue his nephew. But Lonergan — like his stoic New Englanders — is having none of that. Sometimes, he tells us, life hands us burdens too heavy to carry. And yet carry them we do.

This point of view plays out unforgettably in a shattering scene near film's end, when Lee and his ex-wife — whose once-happy marriage was scuttled by an unspeakable tragedy — run into each other on a sidewalk in town. They struggle for words, then manage to articulate a few tangled thoughts that come nowhere near the heart of their shared experience. They end up gulping half-sentences and strangled sobs, finally turning away in utter defeat. We can imagine these two will never speak again.

That scene alone could stand as a short film. It delivers such heartbreaking intimacy that we long for it to end, even as we rise to our feet astonished at the artistry of it all.