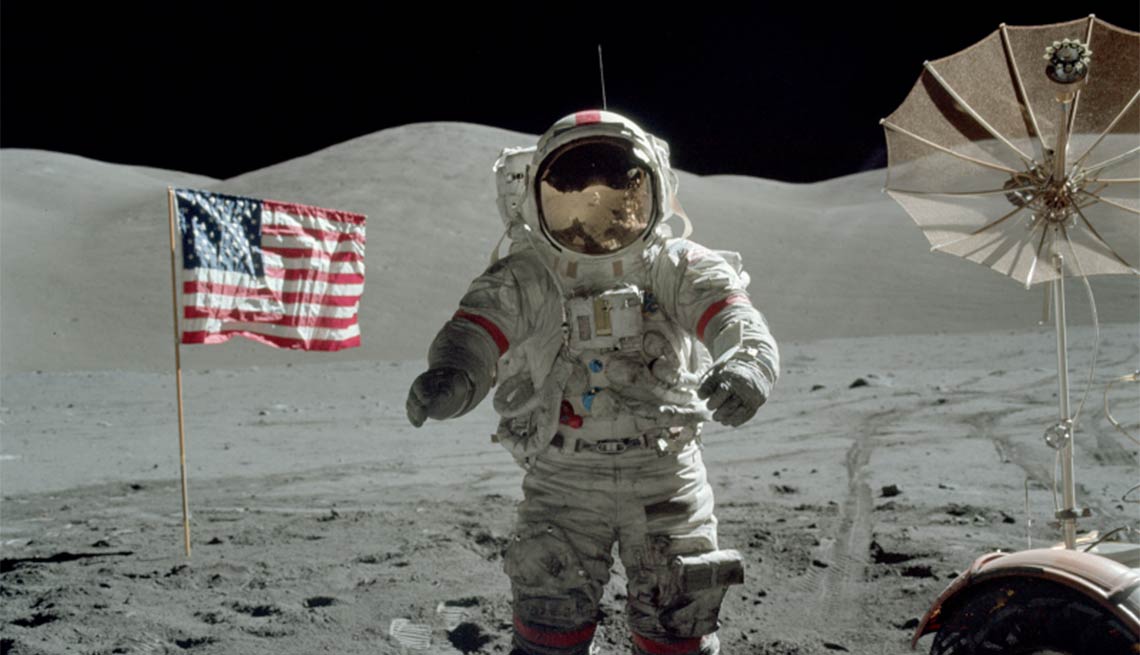 'The Last Man on the Moon' explores the life of Apollo 17 commander Eugene Cernan.

En español | There's more than one reason why The Last Man on the Moon, now in theaters and on iTunes, received the Movies for Grownups best documentary award at our annual Hollywood event a few weeks ago.

For one thing, it ingeniously recaptures the sense of high adventure and endless opportunity that marked America's reach for the moon during the 1960s. It draws a direct line — and a sharp contrast — between the united national enthusiasm for lunar exploration back then and the fragmentary support for heading to Mars in the next few decades.

But mostly,The Last Man on the Moon examines the personal journey of Eugene Cernan. As commander of Apollo 17 in 1972, Cernan left the final (though optimists might say "most recent") human boot prints on the surface of Earth's natural satellite, a mere 239,000 miles from wherever you're reading this.

Thanks to its expert blend of home movies, newsreels, NASA footage and extensive recollections by Cernan, his family and fellow astronauts, The Last Man on the Moon ranks among our very best space documentaries. It's right up there with When We Left Earth and In the Shadow of the Moon. (The latter was likewise a Movies for Grownups best documentary winner, in 2007. Hmm, is there a pattern here?)

By focusing on the life and career of a single NASA flyboy, Last Man crystallizes the astronaut experience with an authenticity we haven't seen since 1983's The Right Stuff.

From the moment in the early 1960s when he gets a cold call from the folks in Houston, Navy pilot Gene Cernan sees his life change forever. Years of training, episodes of mind-numbing danger and decades of worldwide fame bring professional triumph and personal loss in equal measure. Yes, there's that transcendent moment when he steps off the lunar excursion module (LEM) lander onto the lunar dust, but there are also far too many deaths of friends and colleagues, and too much sacrifice of his family to duty. (More than once in the film — and in one heartbreaking latter-day conversation with his daughter, Tracy — Cernan laments, "I was a terrible father.")

The film also exposes the dog-eat-dog nature of NASA's crew-assignment protocols. In an especially poignant scene, astronaut Dick Gordon, who fully expected to command the Apollo 17 mission, recounts losing out to Cernan at virtually the last moment. In the tone of his voice — and in the fire that flashes from his 86-year-old eyes — you can tell Gordon is still plenty ticked off about it.

As the title suggests, The Last Man on the Moon is not shy about finality. Fully aware that he is witnessing the sunset of the Apollo program, Cernan finds himself wondering What does all this mean? as he prepares to climb the ladder to the LEM one last time. Then, almost as an afterthought, in the lunar dust he scratches the letters "TDC" — Tracy's initials. In the airless environment of the moon, they will remain legible virtually forever.

Last Man concludes with a hopeful segment about NASA's plans to reach Mars within the next few decades, and it's a pretty good sales job. After the screening, I stepped out onto a cold-night sidewalk in Washington, D.C., to find a bright and glorious full moon suspended above the National Mall. It looked this close — only the presence of fellow critics kept me from reaching out and trying to touch it — yet our explorers have not ventured back there in nearly 45 years.

That thought threatened to banish the exhilaration instilled by The Last Man on the Moon. If only I could be as optimistic as the octogenarian who had last stood up there, inscribing the next generation on its powdered surface!