En español  |  Boxing as a sport continues to retreat to its corner. As a cinematic subject, however, the sport remains irresistible to filmmakers, inspiring recent movies both splendid (Creed) and so-so (Southpaw). Ranging toward the latter is Hands of Stone, a loosely structured biopic saved by thoughtful performances from Robert De Niro as legendary trainer Ray Arcel and Edgar Ramírez as his most successful protégé, Roberto Duran.

Though many hail Duran as the greatest fighter ever, most of us remember him for his infamous "No mas!" bout with Sugar Ray Leonard in 1980. Yes, Duran forfeited the contest, but to this day he denies having uttered those words of surrender.

Hands of Stone (from Duran's nickname, "Manos de Piedra") makes the case that the layers of pain and frustration that led the boxer to throw up his gloves that night in the Louisiana Superdome can be excavated all the way down to his childhood on the mean streets of Panama City. In that city's El Chorrillo slum, Duran developed emotional scars from being abandoned by his father, going hungry every day and witnessing the often ruthless U.S. dominion over the Panama Canal. Blind rage, the film's Venezuelan director Jonathan Jakubowicz sets out to tell us, can push a guy toward supremacy in the ring. But it also creates a hollow core that can collapse in the face of adversity.

As Duran, Ramírez skillfully traverses Duran's jagged emotional terrain. He deftly channels the boxer's poker-faced machismo, taunting his opponents and projecting aloof detachment when criticized by his trainer. In more tender moments, as the boxer plays with his children or shows flashes of uncertainty, Ramírez makes us feel almost voyeuristic, as though we're observing something meant to stay hidden. 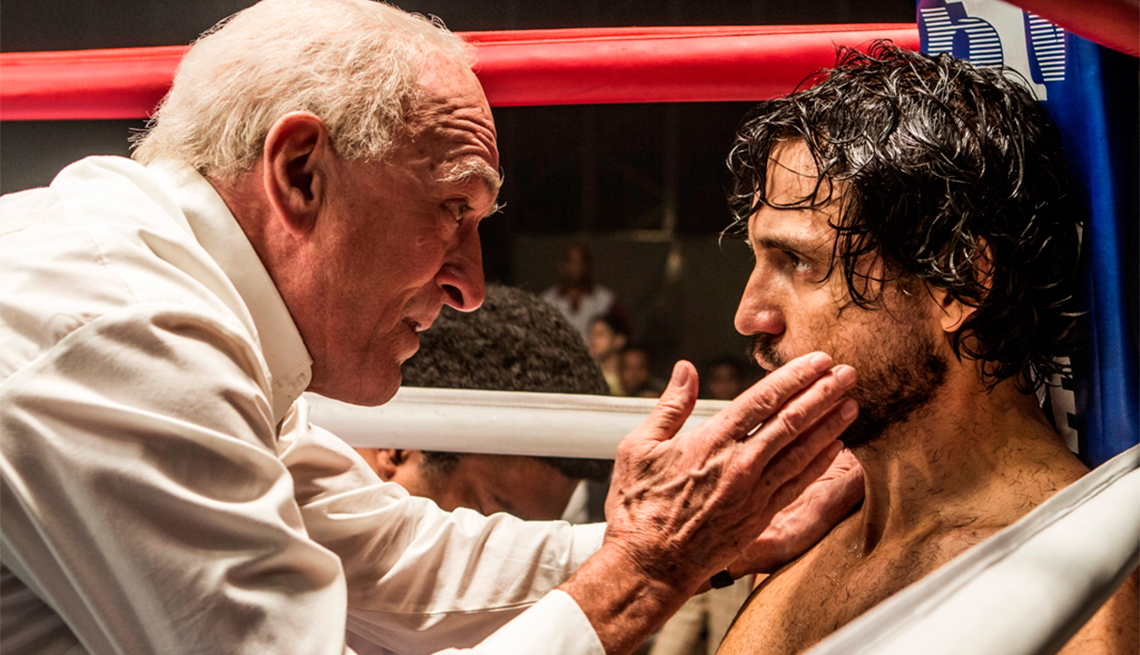 Rico Torres/Courtesy of The Weinstein Company

De Niro, constitutionally incapable of giving a bad performance, dials up a compassionate turn as the aging Arcel, who comes out of retirement — forced upon him by the New York mob — to guide the young boxer's career. John Turturro makes a brief appearance as the gangster who, in the backseat of a limo on a dark New York waterfront, warns Arcel to stop trying to bring boxing to TV. When the two meet again a decade or so later (same dark waterfront, same symbolic limo), it's hard to shake the impression that Turturro filmed the first scene, got chauffeured around the block, then shot the second — a drive-by performance.

The two stars maintain focus throughout, but Hands of Stone takes too many wild swings for its own good. Jakubowicz makes much of the U.S. presence in Panama, including an excess of scenes depicting American brutality in and around the Canal Zone. The relationship between Duran and his wife, Felicidad Iglesias (Cuban actress Ana de Armas), toggles between white-hot and distant, with little examination of the all-important areas in between.

There's also the odd inclusion of a Fagin-like fellow who mentors young Duran on the streets, copilots his rocket to fame, then ends up back in Panama, where he dies in a manner that's been played for broad comedy in dozens of films and TV shows before.

No boxing-movie review can duck its obligation to rate the fight scenes, of course, and it strikes me that editing one of these babies must be a filmmaker's ultimate challenge. Film editor Ethan Maniquis puts his talents to good use, pummeling us with manic cuts to every imaginable fighter's perspective, and then some. Ultimately, however, Hands of Stone suffers by comparison with last year's game-changing Creed, whose fight scenes were ingeniously presented in one glorious, uninterrupted shot. The balletic result seemed to justify boxing's sobriquet as "the sweet science."

A joint U.S.-Panamanian production, Hands of Stone delivers roughly half its dialogue in Spanish, providing subtitles for those of us who lacked the foresight to study the language in high school. Still, enabling the characters to converse in their native tongue does not add enough authenticity for this film to ring entirely true.