Old guys rule — for better and for worse — in Deepwater Horizon, the fiery, true-life story of the Gulf of Mexico oil rig that exploded on April 20, 2010, killing 11 men and fouling the coast from Florida to Texas.

Foremost among the good guys is crew chief Jimmy Harrell, played with drawling confidence by Kurt Russell. From the get-go, when we meet Harrell on a helicopter heading to his "office" 40 miles offshore from New Orleans, we know he's the kind of guy who doesn't take any guff, but also one who never hesitates to dole it out when the situation demands.

He's buddies with electronics engineer Mike Williams, played with no-nonsense dispatch by Mark Wahlberg. Together they're a working-man dream team — the kind of guys who are great when you're grabbing a beer and indispensable when you're trapped on a four-legged flaming torch surrounded by open ocean.

For Harrell and Williams, it's safety first — a view not shared by their opposing men in suits, notably a BP exec played with smarty-pants swagger by John Malkovich. The drilling assignment of Deepwater Horizon is running behind schedule, and the folks at BP — achieving the product placement here that only a masochist could love — order the crew to cut corners and haul up their drill, even though it's possible the cement casing of the well 5,000 feet below hasn't quite dried.

Deepwater Horizon is two movies in one: First comes the lead-up to the explosion, as the crew becomes increasingly unnerved by the orders they're receiving from on high. Second are the thrilling escapes and rescues that ensue, as when the blowout occurs and the rig goes up in flames. 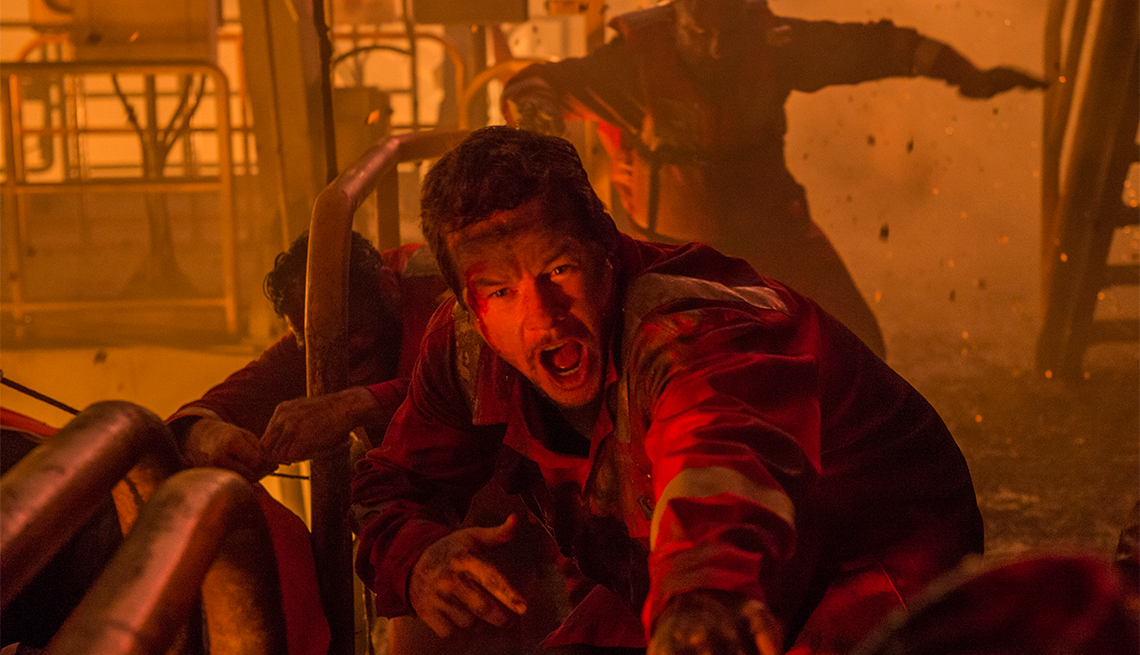 Director Peter Berg (who worked with Wahlberg on Lone Survivor) skillfully stages the chaos aboard the platform, never leaving us to wonder where we are or who's in what specific kind of danger. And we won't soon forget the sight of Russell, his body glistening with embedded glass shards, taking command of the evacuation.

This is Russell's first movie with Kate Hudson, the daughter of his longtime love, Goldie Hawn. Yet the two never appear on screen together; playing the wife of Wahlberg's character, Hudson spends most of the movie fretting by the phone. Better commanding our attention is Gina Rodriguez as Andrea Fleytas, the pilothouse crew member who struggles to keep the rig operational with all hell breaking loose around her. She is, as people said in a less enlightened age, one tough cookie.

It's important to keep in mind that all these actors are playing real people and using their real names. Although there's a mention of the ecological catastrophe that followed the Deepwater Horizon spill, the film rightfully focuses on the human toll: Eleven men never returned to their families. As the final credits roll, their portraits appear on screen.

No one will mistake Deepwater Horizon for a sober-sided analysis of what went wrong out there in the gulf. But there is some comfort in the knowledge that once the beaches have been cleaned and the lawsuits settled, those who never made it home will not be forgotten.