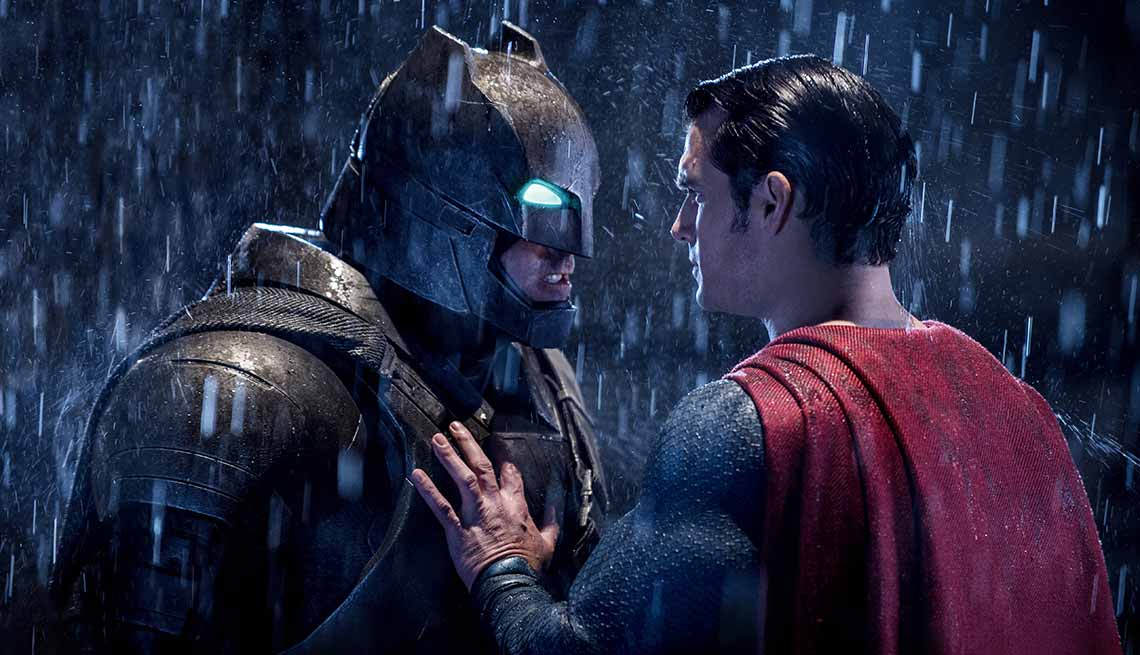 En español | So steeped in its own mythology it comes off as an occult text for true believers, Batman v Superman: Dawn of Justice is a stylish if often impenetrable action movie. It spends two hours setting up the unique conditions under which Batman — a mere human, you see — can do battle on equal terms with superhuman Superman.

Then, before the bell can ring ending even the first round of the Main Event, the two kiss and make up.

Because their mothers had the same first name.

If that's your idea of a spoiler, feel free to sue me. Coming midway through the promised heavyweight bout that got us into the theater in the first place, however, the mundane revelation is emblematic of this self-important tale, which tries valiantly but needlessly to link the two biggest names in the DC Comics universe.

Look, Batman is a brooding loner who lives in a cave. As for Superman, the dude calls his home the Fortress of Solitude. That means these two need each other like the Joker needs Mr. Mxyzptlk (look him up, fanboys). So why have them cross paths? Because the guys who sell comic books and make movies need them together, big time.

And so we get some cockamamie yarn that involves Batman (Ben Affleck) peering across the bay at Gotham City. (Who knew Gotham and Metropolis stood cheek by jowl, like San Francisco and Oakland?) Our dark knight is stewing about some guy named Superman; are his intentions toward humanity honorable? Meanwhile, Superman (Henry Cavill) glares right back — using his X-ray vision, of course — verklempt that this vigilante Bat guy is becoming a law unto himself. Even when their alter egos, Bruce Wayne and Clark Kent, run into each other at a charity function, you can tell they're not about to friend each other.

Still, the Caped Ones have no intention of crossing swords until Lex Luthor— played with giggly glee by Jesse Eisenberg — sets up the battle royale by creating a personal crisis for Superman, the nature of which I could reveal only by spilling more spoiler beans — a mortal sin, apparently, in superhero movieland. Indeed, judging by the barrage of studio admonitions to critics, Batman v Superman contains more spoilers than a NASCAR race. So I'll forgo any further plot reveals except these: The movie involves Kryptonite, an unexpected ally, a couple of kidnappings and one surpassingly ugly alien-human crossbreed (no, Clark and Lois don't become parents). Hardcore franchise fans will alternately swoon and roll their eyes with each development. For the rest of us, much of Batman v Superman — little things like the characters' motivations and the mechanisms by which things happen — remains well nigh indecipherable.

Cavill returns as Superman, a character he plays with a permanently furrowed brow simply because he cares so much about everybody. Affleck, slipping into the Bat Suit for the first time, is appropriately morose and haunted. Those of us who've been with these guys since the 1950s and '60s have watched our once-upbeat role models sink deeper and deeper into superhero angst. Perhaps they should make a joint appointment to ask their doctor if Zoloft is right for them.

The supporting cast has climbed aboard the Mopewagon as well, including Perry White (Laurence Fishburne), Superman's adoptive mother (Diane Lane) and Batman's butler (Jeremy Irons). Only Amy Adams manages to convey some trademark perkiness as Lois Lane. And while the battle scenes are spectacular, the special effect I suspect will most appeal to the film's target audience — 15-year-old males — is Adams in her bathtub, performing a PG-13 homage to Gypsy Rose Lee.

As the title implies, this is merely the first chapter in a planned series about DC Comics' dream team, the Justice League. A modest proposal: As the rest of the squad assembles, could one of them crack a smile or two? Arch villains should not have all the fun.