Benedict Cumberbatch and Johnny Depp get gangsta' in 'Black Mass'

En español | There is, indeed, a Roman Catholic Mass in the course of Black Mass, the bloody, true-life crime drama starring Johnny Depp as Boston gangster Jimmy "Whitey" Bulger. It's a funeral Mass for the sole major character in the film who's allowed to die of old age. Others around him take less-graceful exits: a bullet to the head; a savage beating; a long, gurgling strangulation.

But the film's title more aptly applies to the dark cloud of crime and corruption that hovers over 1970s Massachusetts, where the movie unfolds. It's a roiling cauldron of corruption in which brutality and lawlessness have somehow become synonymous with honor and loyalty.

Life in the criminal underworld of mid-1970s South Boston is not for the faint of heart. The Mafia is at war with the local Irish mob, led by Bulger, a balding, small-time hood played with understated ferocity by Depp. Bulger is fiercely devoted to his family, most especially his young son, his mother and his brother. The latter is a highly respected state senator, played with aristocratic detachment by Benedict Cumberbatch.

Bulger is a punk. He's a sociopath. He's a cold-blooded killer. But in the weird moral calculus of South Boston, he's a favorite son: When he's not pulling teeth from the corpse of his latest execution victim, this Irish "Southie" helps old ladies carry their grocery bags. At least, the locals figure, he's not one of those no-good Italians who are strong-arming their way into every numbers racket and pinball arcade in town.

Oddly enough, the FBI essentially agrees. An ambitious young G-man named John Connolly (Joel Edgerton), who grew up with Bulger, is assigned to enlist Whitey's help in bringing down the Italians. In return, Bulger gets to fill the criminal vacuum created by the Mafia's departure, making him more dangerous than ever. Along the way, Connolly makes enough compromises to assure his own destruction, betraying every principle he has sworn to uphold.

In Black Mass, we welcome Johnny Depp back from The Land of the Freakishly Flamboyant, that unbeloved country he has occupied for the past few years (see The Lone Ranger, Into the Woods or Mortdecai.) As Bulger, Depp doesn't let a masterly makeup job mask the nuances of his character's twisted psyche. 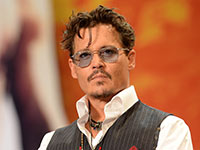 Slow-moving, gravel-voiced and often inscrutable behind his wide, vaguely mad eyes, Depp's Bulger radiates muted menace — except for those moments when he erupts into sudden, always-lethal violence. The ominous presence Depp creates pays off in the film's most teeth-clenching scene, when a friendly discussion about a secret family recipe suddenly turns gut-wrenchingly threatening. In Depp's sure hands, the scene ranks right up there with Joe Pesci asking Ray Liotta, "You think I'm funny?" in Goodfellas, or with Robert De Niro discussing the virtues of baseball in The Untouchables. Those who appreciate the art of film acting can only hope that Depp is on the verge of a mid-career renaissance akin to that of Jack Nicholson (whose turn as a Whitey Bulger-type character in The Departed, come to think of it, is echoed by Depp in more than a handful of vignettes here).

Black Mass aims to be the cautionary tale of a straight-arrow cop who hops into the devil's passenger seat for a nonstop ride to hell. As played by Edgerton, though, Connolly seems too easily swayed, too eager to enable his childhood pal's bloody dreams of grandeur. Almost as soon as he takes on this unsavory assignment, Connolly finds himself on a slippery slope steeper than the road down Bunker Hill.

More intriguing, but touched on only occasionally here, is the relationship between Bulger and his brother Bill — the successful, beloved president of both the Massachusetts Senate (for 18 years) and the University of Massachusetts. Bill pops up here and there throughout the film, his loyal public service the perfect foil to Whitey's maleficence. Cumberbatch — magnificent screen actor that he is — dominates every scene he's in, and when he leaves, we miss him. Black Mass might have been a lot more emotionally involving had we been allowed to spend more time with the Brothers Bulger.