I'm not the kind of moviegoer who was dying to see the Oscar-nominated star of Schindler's List trade the drama genre for thrillers. Still, you've got to admire the career-makeover courage of Liam Neeson: In his mid-50s the soulful Irish actor reinvented himself as a hunky but sensitive action hero, giving midlife males everywhere permission to totally kick ass. Or at least believe they can. 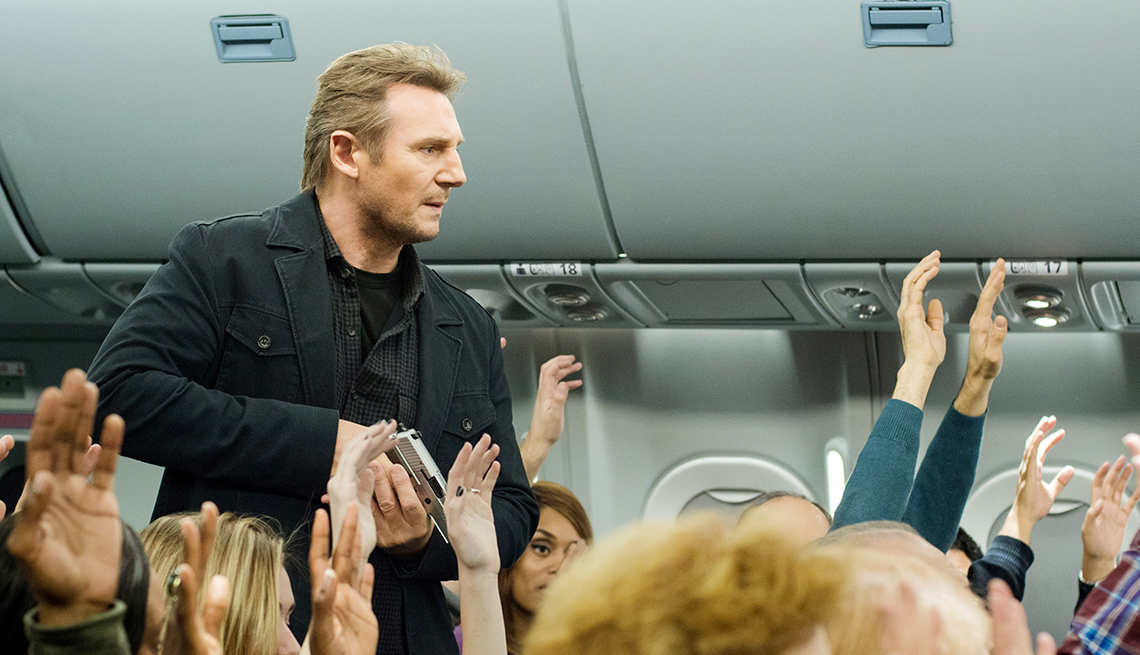 Liam Neeson stars in "Non-Stop." Is the air marshal the good guy or not?

Many of the actor's more recent action projects, regrettably, cast doubt on the ability of Neeson's famous boxer's nose to sniff out quality material. Too often of late, Neeson has agreed to star in a film with a nonsensical plot and a screenplay full of holes large enough to fly through on a 747.

So it is with this week's Non-Stop, which will make viewers wish they'd never started.

Neeson plays Bill Marks, an alcoholic U.S. air marshal grieving the death of his young daughter — oh, and about to board a flight from New York to London, natch. Though Marks is clearly in no shape to guarantee anyone's air safety, that doesn't stop him from assessing potential threats before he's even stowed his carry-on. Shortly after we reach cruising altitude, Marks receives a text message (can your carrier boast service like that?); it's from a madman threatening to kill one passenger every 20 minutes until $150 million is wired into his bank account.

Before it becomes clear why the money is to be transferred — come to think of it, it never becomes clear — Neeson starts roughing up passengers in his hunt for the perp. (If you thought airplane bathrooms were brutal before, wait till you see how the first victim perishes.)

The rest of the plot turns on Neeson's serial scrutiny of pretty much the entire flight manifest: the profiled Muslim, the nerdy guy sweating bullets in the back, the cocky copilot. Not even Marks' fellow passenger in business class, the frazzled Jen Summers, can escape his suspicion; played by four-time Oscar nominee Julianne Moore, Jen has the air marshal's back from Frame 1 — but for no other reason than that these two are the only A-list celebrities in sight.

Summers and a pair of flight attendants — oddly cast with Michelle Dockery (the priggish Lady Mary Crawley from Downton Abbey) and Lupita Nyong'o (before she found fame in 12 Years a Slave) — believe Marks is the good guy. At the same time, however, clues start to point to him — notably the fact that the bank account awaiting the money transfer is his own. A bomb smuggled aboard in a briefcase full of cocaine is just one of another dozen plot elements I can't begin to explain. And there's a crash landing, of course, but it pales in comparison to the one Denzel Washington finessed in Flight.

If you want to support a middle-aged actor named Liam Neeson as he shows some brawn center-screen, then what the heck: Buy a ticket, sit back, and don't sweat it if you nod off drooling on your seatmate during this seemingly endless flight.