It's been a long, cold winter, and I'm looking forward to basking in the bleachers, simmering in the juices of futility as I root for my beloved Washington Nationals. Maybe that's why I wasn't especially eager to push the clock ahead to football season with Draft Day, Kevin Costner's new movie that explores the freewheeling, backroom-dealing world of the NFL draft.

True, the league's draft of college players is a spring ritual (beginning May 8 this year). And the NFL, which has plastered its imprimatur all over this film, would dearly love for it to become as much a post-equinox tradition as crocuses and Easter bonnets. But certain stereotypes exist for a reason, and we — meaning I — can comfortably generalize devotees of the NFL's actual draft day as guys who don't shave between Labor Day and the Super Bowl, and name their kids "Peyton" or "Deion" (even the girls). In other words, Draft Day is in some ways a movie tailored to appeal to losers. 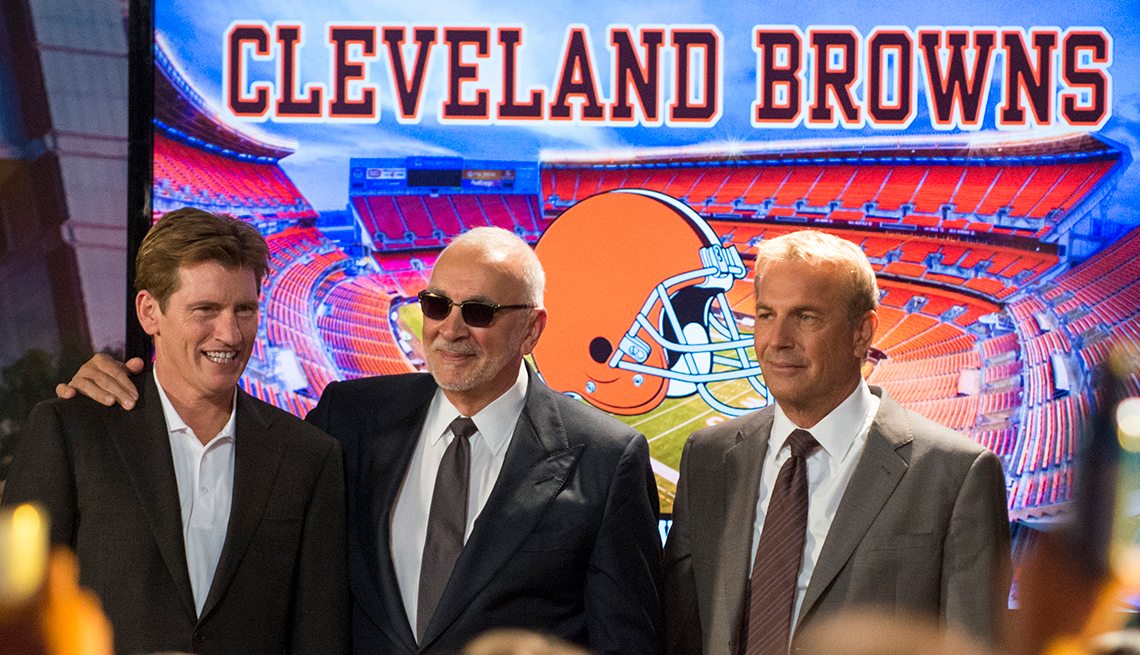 So imagine my surprise at being captivated by the exploits of Costner's Sonny Weaver Jr., a boardroom badass who runs the hapless Cleveland Browns.

We meet Sonny on the morning of draft day, and true to the sports-bio genre (see also Moneyball), we learn right off that his personal life is on the skids: His girlfriend (Jennifer Garner), who happens to be a fellow Browns executive, has important news that he has no time to hear. Moments later we find out his job is on the line: The drive-time sports-radio guys are calling for his head (see also Friday Night Lights). For starters, the whole town's ticked off at Sonny for firing his own father as the team's head coach at the end of the previous season. Plus Dad helped his son's public image not one bit by dying the week before our story begins.

We really shouldn't care what's happening to this self-absorbed money guy, but few actors are more adept at gaining an audience's sympathy than Costner, with that wistful smile and those twinkling eyes. We immediately want him to be happy, so we're on his side from the get-go.

Indeed, director Ivan Reitman's chief accomplishment in Draft Day is getting us to give a rat's patootie about any of these folks. The college prospect we're asked to side with, a kid named Vontae Mack (Chadwick Boseman, who played Jackie Robinson in 42), faces the harrowing uncertainty of being chosen first in the draft by Sonny or — horror of horrors — as low as 14th by someone else. That could drive his signing bonus down to a paltry $7 million! Reitman attempts to ratchet up the drama by showing us that Mack is responsible for two younger brothers, so, you know, the man's got mouths to feed.

The other guys involved likewise agonize over the prospect of being dropped to lower draft picks or, in the case of one current NFL player, relegated to the role of backup quarterback (the sweetest position in the history of sports, for my money, with the possible exception of Cal Ripken's understudy).

Under pressure from team owner Frank Langella, Sonny manages to make everyone happy. That includes his boss, his new head coach (Denis Leary), his fans, his favored player, his gal pal and even his estranged mother (a radiant Ellen Burstyn). We're not quite sure what to make of Sonny's ex-wife, played by Rosanna Arquette. She arrives with a great flourish — game-changer alert! — but somewhere along the way she just drifts into the background. It's a great waste of a terrific actress.

The cast list of Draft Day is dominated by football players, NFL executives and sportscasters playing themselves, which jacks up the film's already-elevated sports-geek factor. For the casual observer, though, they might as well be credited as "John Does 1 through 34." For those of us who don't know our Roger Goodells from our Chris Bermans, some sort of clue would have been a big help here.