If Michael Keaton's entire career happened just so he could play a funhouse-mirror version of himself in Alejandro González Iñárritu's inspired, dreamlike Birdman or (The Unexpected Virtue of Ignorance), it was 39 years well spent.

Keaton plays Riggan Thomson, an actor notorious for walking away from a fabulously successful superhero-movie franchise called "Birdman" some years ago. Rash move! Not only has Riggan never duplicated that success, but his career seems to have nosedived. Now he's invested his last dime — and what remains of his reputation — in a four-character Broadway play based on a short story by Raymond Carver. 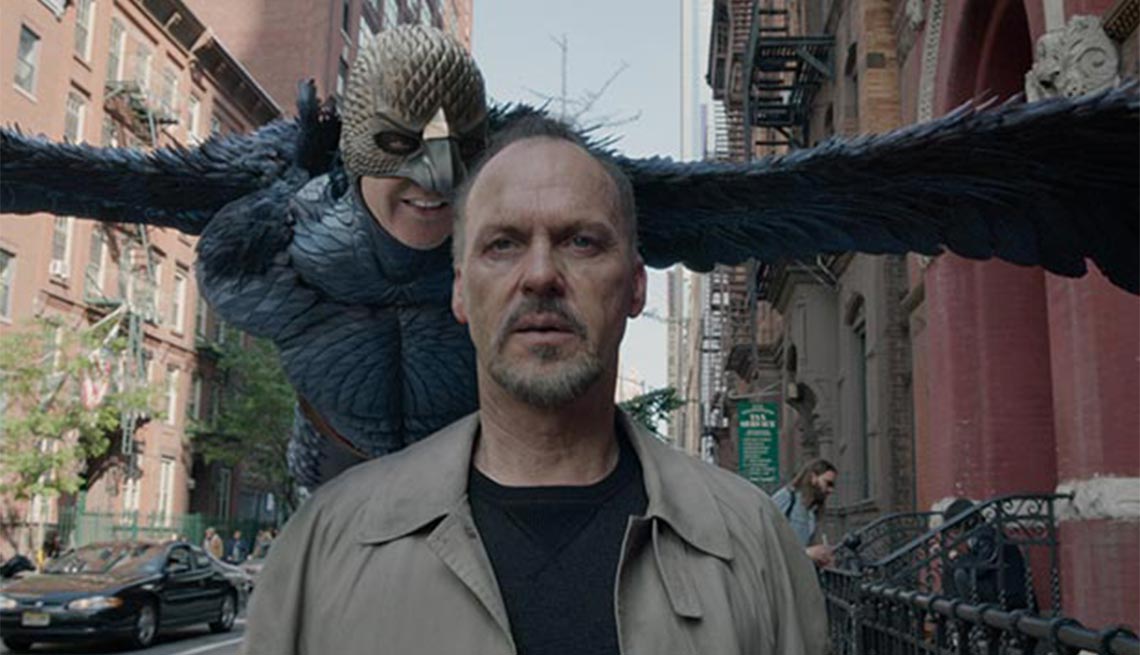 As the play's writer, director and star, Riggan becomes reluctant ringmaster to a troupe of actors who toggle between cripplingly insecure and annoyingly cocksure.

Premier among them is Mike (Edward Norton), a Broadway star who will either save the play with his brilliance or kill it with his self-indulgent antics. Norton brings an easy charm to the film, and the scenes where Mike really shows his stuff as an actor make his selfish forays into onstage drinking, media posturing and sexual carousing even more exasperating.

Mike's girlfriend (Naomi Watts) plays one of the show's leading ladies; Riggan's girl (Andrea Riseborough) is cast as the other. In the week or so we spend with this dysfunctional quartet, both relationships rise and fall. Into the mix come Riggan's ex-wife (Amy Ryan) and their troubled daughter (Emma Stone), while looking on with mounting anxiety is Riggan's lawyer (Zach Galifianakis).

Further complicating matters, Riggan hears a constant taunting in his head: It's the gravelly voice of Birdman himself, mocking him for having forsaken the role of a lifetime. Nor do the delusions stop there. Riggan begins to believe he possesses superhero powers — telekinesis, for starters, and possibly even flight.

As Birdman progresses, director Iñárritu stages minor miracles that seem to prove Riggan truly can move objects with his mind: a sliding flower vase, a spinning cigarette case. He then deftly intensifies that effect to poltergeist-style room trashing and, ultimately, a fiery street battle with a giant winged monster. By the time Riggan, in the film's most visually poetic scene, soars aloft, swooping through the concrete canyons of Manhattan, we have bought into his fantasies along with him.

Iñárritu (Babel, 21 Grams) constructs the dream state that is Birdman as a single tracking shot; from the opening moments, with barely a visible cut, we seamlessly follow the characters everywhere — down hallways, onto the stage, out into the street — right up to the climactic scene.

Alfred Hitchcock did much the same thing in his 1948 thriller Rope, but Hitch was limited by the amount of film his camera could hold; every 10 minutes or so he had to splice in a trick shot to conceal the switch to another roll. Shot on video, by contrast, Iñárritu's changes are limited only by the genius of his digital-effects crew. Which is to say they are limited not at all.

If you find Birdman's ambiguous ending a bit unsatisfying, join the club. Still, the technical achievement of this film is monumental, and the supporting cast is uniformly excellent. Above it all towers Keaton, with a performance that is frequently nerve-racking and at times even heartbreaking.

Like his character, Keaton once walked away from a legendary superhero role, turning his back on the Batman franchise in 1992 after its first two installments (there would be seven in all). It would be unfair to say Riggan Thomson is an autobiographical role. Still, while Keaton has remained an in-demand actor in movies and on TV, it's clear he brings to Riggan the frustration of a man who once created something special and who desires, more than anything else, to make one more indelible contribution to his art.