Healthy Vision Month promotion: Get 25% off the Smart Driver online course. You could even save on auto insurance!

Musically explosive, emotionally powerful and flat-out funky, Get on Up tells the outrageous life story of James Brown with a quirky brilliance worthy of the man at its center.

And if 42 — last year's Jackie Robinson biopic — didn't convince you that Chadwick Boseman is one of the best young actors out there, his performance as Brown in Get on Up will have you sending testimonials to the Oscar folks.

Chadwick Boseman stars as James Brown in "Get on Up."

The traditional trouble with film bios is their narrative predictability: Recent examples such as Jersey Boys, Lee Daniels' The Butler and Mandela: Long Walk to Freedom all start at the beginning and take us on a chronological guided tour of the subject's life, lingering now and then to examine pivotal events.

In Get on Up, director Tate Taylor and screenwriting brothers Jez and John-Henry Butterworth start with a late-life, apparently drug-addled James Brown wielding a shotgun before a room of terrified salespeople. He's as surprised as they are when he blows a hole in the ceiling, but the image is appropriate: For the next two hours we experience Brown's life in scattershot vignettes — a moment from his impoverished childhood here, a glimpse of him entertaining the troops in Vietnam there, then a burst of brutality as he lashes out at a friend, employee or wife. 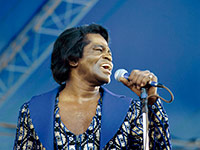 13 People Who Made James Brown a Star

As the film progresses, though — and as Boseman's charismatic J.B. occasionally turns to address the audience — the film's apparent haphazardness begins to assemble itself into an elaborately coherent structure. A half-hour or so in, we realize we're experiencing James Brown's life from behind those sometimes piercing, often wild brown eyes — and from that perspective, life doesn't really happen chronologically.

In the tangle of our own psyches, Get on Up proposes, the things that happen in our youth recur until we die, and our dreams of the future occupy our present. For the 50-year-old Brown, his childhood abandonment by his parents was still a vivid wound. And for the teenage Brown, in prison for stealing a suit, the worldwide fame he would achieve as an adult was already real, echoing in his ears with the sound of adoring crowds chanting his name. It's a tough premise to pull off cinematically, but director Taylor — whose sure-handed direction kept The Help from veering into sappy stereotype — proves himself up to the challenge.

Boseman's James Brown is an endearing puzzle, shaped by his tragic childhood and cocky self-assurance. He is at the center of his own personal solar system, orbited by lovers, musicians and money men — many of them drawn less by affection than by the irresistible gravitational force of his genius.

Get on Up suggests that Brown had only two solid friends in his life: songwriter-sideman Bobby Byrd (Nelsan Ellis, who should star in a biopic about Nat Cole) and promoter Ben Bart (Dan Aykroyd, in his most affecting screen role in years). Bart seems to have been the one guy who stood — even if it was temporarily — between Brown and utter financial ruin.

Despite the film's innovative storytelling and Boseman's breakout performance, the real star of Get on Up remains James Brown himself. Boseman has the moves down, to be sure, and the musical staging is flawless. But Taylor has the supreme good sense to let the Godfather of Soul sing for himself on the soundtrack, allowing us to bask in the tsunami of petulance and pain that made his recordings so dynamic.

If you're looking for the National Enquirer version of Brown's life, Get on Up will let you down. More or less absent here are the gifted singer's tumultuous love life, history of three (or four) marriages, multiple extramarital children, drug use, tax troubles and assorted armed assaults. But this is Brown's story the way Brown would have liked us to see it. The James Brown of Get on Up is easier to love than his real-life counterpart, but that historical liberty makes for a movie that shimmies, screams and mash-potatoes its way into your heart. You'll feel good — you knew that you would now!