But Foxcatcher, which recounts the tragic intersection of the lives of John du Pont with the Schultz brothers — two freestyle gold medalists at the 1984 Olympics in L.A. — never achieves a clean pin. Instead it suffers from underdeveloped storytelling (this despite its lavish run time) and a lack of character insight.

There's no question that director Bennett Miller, who nabbed an Oscar nom for the fully developed personality portrait Capote, has assembled a brilliant cast here: As du Pont, Steve Carell continues to extend his range far beyond comedy, while Channing Tatum (21 Jump Street) and Mark Ruffalo (The Kids Are All Right) offer deeply emotional turns as tight-knit siblings Mark and David Schultz. 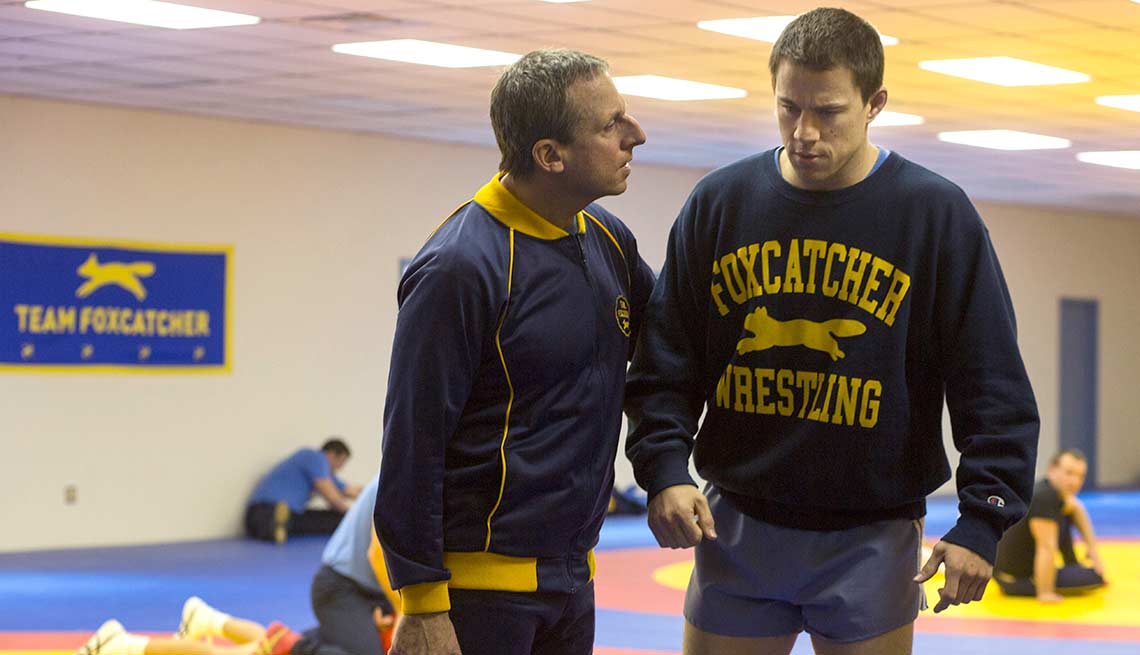 Foxcatcher opens on a struggling Mark (Tatum) three years after his Olympic triumph, scraping by on $50 honoraria for high school speaking gigs and gamely trying to match the coping skills of his older brother.

Dave (Ruffalo), happily married with kids, earns a decent living as a wrestling coach. He has been Mark's lifelong protector, and their complex bond is movingly portrayed, even in scenes devoid of dialogue, by the burly Tatum and the open-faced Ruffalo. When the two spar it's a martial ballet, full of grace and rhythm and fire.

As soon as we meet du Pont, living on his family's vast Foxcatcher Farm near Valley Forge, Pa., we realize he's a rare bird indeed: Sporting a distracting prosthetic schnoz, Carell plays du Pont with a shuffling gait, a locked jaw and a gaze forever directed downward on the less-privileged masses. Living on the estate alongside him is his overbearing, overly critical mother, Jean — played by the extravagantly talented Vanessa Redgrave, who deserved more screen time.

Du Pont collects weapons and military paraphernalia, indulges heavily in Scotch and cocaine, and is obsessed with (but has no skill for) wrestling. When he invites the Schultz brothers to move to Foxcatcher (where he has built a state-of-the-art gym) and help him train a wrestling team for the 1988 Olympics in Seoul, Dave declines. Mark, sensing an opportunity to make a future for himself, accepts du Pont as his mentor and benefactor.

Ensconced on the estate in a luxurious, fully stocked guest cottage, Mark is quickly discomfited by du Pont's creepiness. Recognizing his disciple's disaffection, the millionaire offers brother Dave more money than he can possibly refuse to take his brother's place. A deadly dynamic among the three has been set in motion.

Carell, Ruffalo and Tatum imbue their characters with just the right amount of intrigue. Their onscreen interactions, often wordless, are finely nuanced. There are sexual undercurrents to du Pont's dealings with Mark, and we're made aware that Mark's still waters run not only deep but troubled long before his anger explodes in an act of self-mutilation. Through it all, Dave's unquenchable longing to be there for Mark is almost palpable.

Because of the film's overly sparse screenplay, however, we are never permitted to unravel why this moneyed Machiavellian is so intent on driving a wedge between the brothers, nor why the Schultzes would consent to his meddling. Miller's camera work is often beautiful, capturing in almost suffocating shadow the luxurious interiors and brooding forests of the du Pont demesne. The oh-so-slow action is meant, one suspects, to allow for a more intellectual interpretation of what takes place.

For viewers of Foxcatcher, regrettably, the net effect is to feel cheated out of an explanation. Both for filmgoers and for real-life survivors, the question at the heart of the matter is left hanging: Precisely why did John du Pont kill Dave Schultz, forever depriving Mark of the brother who might have been his savior?