Judi Dench, already a cinematic treasure, gives us one more reason to fall in love with her in Philomena.

Dench plays the title character, who as a young woman was one of Ireland's infamous Magdalene girls — those thousands of unwed, pregnant young women who were taken behind convent walls, put to work in laundries as virtual slaves, then forced to see their babies sold to rich families. 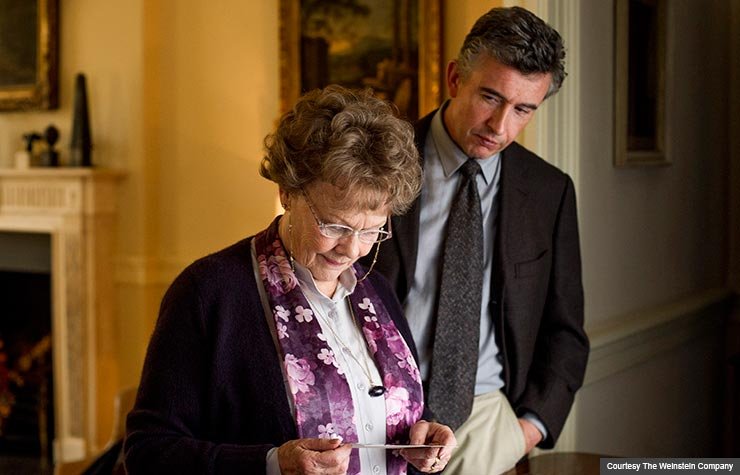 Now, 50 years later, Philomena wants to find the son she gave up. She enlists the help of an out-of-work investigative reporter (Steve Coogan, who also cowrote the script), utterly unaware of how her search will end.

Philomena's eyes twinkle with good humor and sweet innocence, yet behind them hovers a black hole of anger and loss. Not for one moment does Dench, a master of the screen-acting art, let us lose sight of the internal conflict between Philomena's love of life and her life of regret.

The story often threatens to surrender to melodrama. But director Stephen Frears (The Queen) refuses to take the bait. He earns each laugh — and every tear — honestly. We share Frears' obvious affection for his characters, and for a while that's enough to carry the film. But as the full story of Philomena's betrayal unfolds, his rage at the injustice done to her — indeed, the injustices done to all the Magdalene girls — becomes contagious.

Watch: A film clip from the movie Philomena

Channeling that anger on our behalf is Coogan as the jaundiced reporter who slowly realizes he hasn't quite seen it all after all. Coogan is always fun on screen — U.S. audiences don't get to see him nearly enough — and here he gives a genuinely engaging performance. As writer and producer of the film, Coogan has said he made Philomena to inform the world about the plight of the Magdalene girls. His passion shows in every frame. Because we love Philomena so, it's reassuring to see her in such good and loving hands.

Like Coogan's reporter, you'll want to wrap your arms around Judi Dench's Philomena and take her home. You can't, of course — but Philomena will follow you there anyway.