In a year packed with survival films (Gravity, 12 Years a Slave, Captain Phillips and more), All Is Lost stands out for its stark minimalism.

Director J. C. Chandor (Margin Call) took a huge gamble when he set out to make a movie with a lone cast member (playing a character listed in the credits as “Our Man”) and no dialogue (except for a single profanity, uttered in frustration). 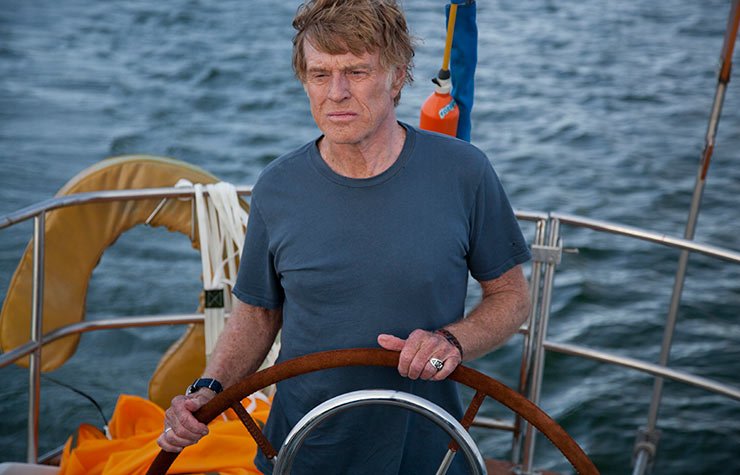 Robert Redford at the helm.

Chandor must now be collecting on that bet.

For more than 100 minutes, we watch Our Man struggle to survive after his 39-foot sailboat gets T-boned by a stray shipping container in the middle of the Indian Ocean — and we are mesmerized.

It’s fitting that only one actor could have held our attention throughout this mute ordeal, and Chandor landed him for the role: Robert Redford.

At 77, Redford has cast off any lines mooring artistic achievement to age. No longer breezily handsome, today’s Sundance Kid is weathered and wrinkled and worried.

So what makes him more fascinating than ever?

Watch how he squints into the sunlight, scanning the endless sea before methodically taking action. With his radio shorted out, Our Man must tackle one knotty problem after another, starting with how to dislodge the huge metal cargo box impaled in his skiff’s wooden hull. Good thing Redford knows his way around canvas, glue and your average hand-operated bilge pump.

When his luck goes from bad to worse (along with the weather), Our Man gets tumbled repeatedly inside his boat. (Redford refused a stunt double and has the cuts and bruises to show for it; he also reportedly nearly drowned during filming.) Eventually he retreats to a rubber life raft with a few last food cans and a tainted water supply.

Sharks are circling. All does, indeed, seem to be lost.

But look at all we’ve gained: Chandor and Redford use their less-is-more strategy to elevate All Is Lost to excellence. The film is truly a masterpiece of restraint: Chandor offers no more character details than that Our Man has a family, drinks in moderation (a half-bottle of Scotch eases the pain from a gash in his head) and harbors a few regrets. We learn more only through Redford’s facial expressions and the rhythmic economy of his movements about the craft. The raw drama of the situation becomes the movie’s subtext, and Chandor doesn’t milk it — ever.

Nor does his star. For that, it’s a good bet that Robert Redford will finally get the Oscar that has so unfairly eluded him.