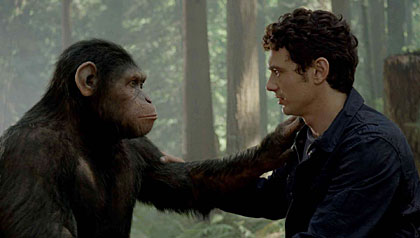 Will Rodman and his ape Caesar embrace post-revolution.

En español  |  He worked tirelessly to see his vision come to life. He lavished untold millions of dollars on the project. His intentions were pure, his execution flawless. And yet, despite all that, he unleashed on the world an unexpected disaster, one that would engulf unsuspecting victims around the globe.

I’m sorry, did you think I was writing about James Franco’s scientist character in Rise of the Planet of the Apes? No, I meant Apes director Rupert Wyatt, whose technically astonishing film somehow manages to hit all the wrong notes, and does so with such emphatic assurance you’d think he was doing it on purpose.

It has been 43 years since the original Planet of the Apes, when lost astronaut Charlton Heston landed on that strange planet where apes ruled the world. The iconic final scene, in which Heston discovers he’s been on Earth the whole time, has been celebrated and parodied so many times you can’t even call its discussion here a spoiler. Now, this new film presents the story of how apes came to grab top rung on the evolutionary ladder.

For that we can blame researcher Will Rodman (Franco), who is desperately searching for a cure for Alzheimer’s, the disease that is slowly taking away his dad, touchingly played by John Lithgow (once again proving that an ingenious actor can always find a way to make a silk purse from a chimp’s ear).

Rodman’s drug works, for the most part — but in his research he also discovers that it makes lab chimps super-smart. So smart, in fact, that Rodman takes a baby chimp named Caesar home and essentially raises it as his own child.

Well, you see where all this is going, because while he nurtures Caesar and takes him for frolics in the forest, Rodman ignores the 800-pound gorilla in the room: When a chimp is as smart as a person, how long is he going to go along with being led around on a leash? Not long, it turns out, and soon Caesar is running afoul of the rules that society sets for pets, and it’s all downhill from there (for us humans, that is — the monkeys find their upward trajectory turning practically vertical).

What could go wrong here, movie-wise? Wyatt and his team of writers have clearly fallen in love with the technology that turns actor Andy Serkis — who was the human factor of the fondly remembered, computer-generated Gollum of the Lord of the Rings films — into a thinking, ingenious chimp. But the filmmakers fail to provide consistent motivations for the characters, who are forever driven purely by the set of circumstances they face at any particular moment.

So while the film quickly sets up Rodman’s human motivations for developing the drug — his father’s dementia — his subsequent actions and reactions don’t add up. The drug restores his father’s brain processes overnight — yet Rodman doesn’t tell anyone (nor does anyone in the outside world notice that the guy who used to wander around the neighborhood aimlessly is suddenly a laser-focused genius). And three years or so later, when the drug begins to lose effectiveness, Rodman curses it as a failure. He totally ignores the fact that he has managed to push back one of the great scourges of old age — but of course, from a scriptwriter’s perspective he needs to feel that way in order for the plot to push on to the next level.

Likewise, Caesar is fine with being led around on a leash — until he isn’t, so the ape rebellion can begin in earnest.

Logistics don’t seem of major concern to the filmmakers, either. Caesar, confined to a weird kind of primate prison — a surreal facility clearly created wholly out of the writers’ imaginations — manages to break out late one night, travel untold miles to Rodman’s home, steal some brain-building serum and scamper unseen all the way back to the jailhouse before dawn. How does he do it? Through the writer’s will. Same thing with the climactic ape attack on the research lab: Hundreds, maybe thousands, of apes band together for the assault. How did the monkey reinforcements, picked up by Caesar and company at a local zoo, suddenly develop Marine-like discipline without the benefit of Rodman’s drug? Uh …

Listen, I know we’re talking about a late-summer sci-fi time-waster here. But Rise of the Planet of the Apes presents a case study of the conundrum of high-budget fantasy filmmaking. The creators have invested millions upon millions of dollars to present a hyper-real world where monkeys can, and do, take over. It’s that very realism — the uncanny human-ness of the chimps, the meticulous marriage of real and computer imagery — that makes us more aware of the writers’ laziness in storytelling, their bread-and-circuses attitude toward their audience.

The original Planet of the Apes — with Rod Serling’s sometimes too-talky script taking scholarly stabs at the notions of class and prejudice — was equally ridiculous in its conception. But we could see that Roddy McDowall and Maurice Evans were behind those rubber monkey masks. The Ape City was clearly a back-lot cutout. The transparently artificial presentation worked: At one level the film was Saturday-afternoon popcorn fodder; at another it was allegory, its presentation as rudimentary as a Greek drama.

In presenting its ape-bound world perfect in every detail, Rise of the Planet of the Apes sets itself a monkey bar so high it could be reached only if it came wrapped in a flawless, meticulously measured script. With its outrageous premise, I suspect no one could have written that— not even a roomful of chimps typing for a thousand years.