As satisfyingly quirky and soulful as Johnny Depp is playing Tonto, the dry-humored sidekick to the titular character in this 2013 Disney version of The Lone Ranger, he can't save the $215 million production from several mortal flaws.

Yes, director Gore Verbinski and producer Jerry Bruckheimer made magic once with Depp as the main attraction of Pirates of the Caribbean, but this film lacks Pirates' eye-popping imagery, its thrill-ride, edge-of-your-seat action, and its uniformly colorful, intriguing characters. 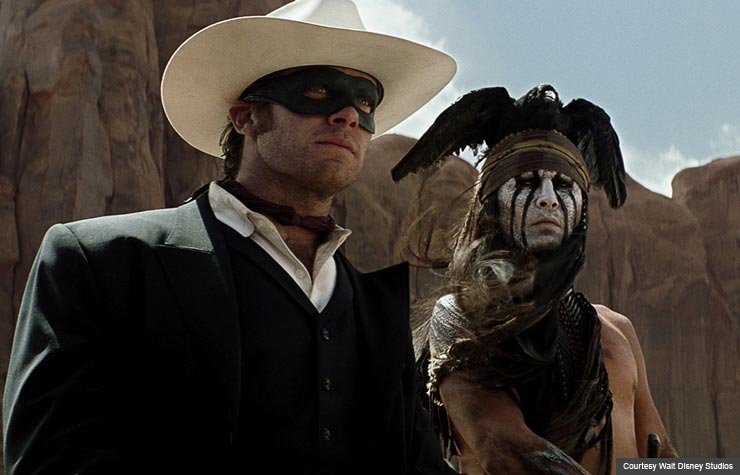 Let's start with the characters. Yes, Depp (who prepared by watching reruns of the 1950s TV series) is great, but his costars can't compare.

Armie Hammer, great-grandson of oil tycoon Armand Hammer and seen most recently in Mirror Mirror and J. Edgar, plays John Reid, aka the Lone Ranger, a law-and-order district attorney who is ambushed by an outlaw gang in a small Texas town in the 1860s. His ranger brother is killed, but Reid is saved (or brought back to life) by Tonto, and the pair set out across the Wild West to get revenge.

Unfortunately, Hammer's Reid is flat and uninspired, and the chemistry between him and Depp's Tonto is nonexistent. (What would Thelma have been without an equally spirited Louise by her side?) William Fichtner (The Dark Knight, Black Hawk Down) as the bloodthirsty outlaw Butch Cavendish is scary-looking enough, but he doesn't come off as a believable threat.

And the usually fantastic Tom Wilkinson (The Best Exotic Marigold Hotel), who plays Latham Cole, the corrupt head of a railroad and silver-mining operation, is more boring than he is diabolically bad. The only cast members to come close to matching Depp's charisma are Helena Bonham Carter, in a cameo as a wooden-legged madam named Red, and a beautiful all-white horse.

OK, the desert vistas of The Lone Ranger are pretty fabulous, but the tarantulas, rocky cliffs and dusty dunes won't, in good Western fashion, make your bones rattle or your mouth go dry.

And though Depp's cracked face paint and his vulture headpiece are awesome enough, his fellow cast mates' costumes are, in comparison, unoriginal. I also found myself distracted by Hammer, whose dirt-crusted visage in several scenes only seemed to highlight his obviously professional whitened teeth (a trend that, in my mind, has clearly gone too far).

As for action, this Ranger has it — galloping horse scenes, wild train rides, even a bridge collapse — but there's a tiresome feel to it all, perhaps because the film is overly long, by at least 30 minutes. Aside from the fun in seeing Depp as an old man, the modern-day museum framing device to the story offered little and could easily have been cut.

Looking for a movie to rent tonight? Check out our Movies for Grownups reviews from 2013 and years past to see what's worth watching.

Violence, on the other hand, is not lacking, so much so that I can't imagine this being appropriate for kids, not to mention they'd be hard pressed to sit still for the duration. I'm not sure whom Verbinski and Bruckheimer realistically expect their audience to be, beyond Depp fans. We'll see what the box office reports, but my best guess is that die-hard action fans, Western lovers and those seeking memorable characters will all be disappointed.