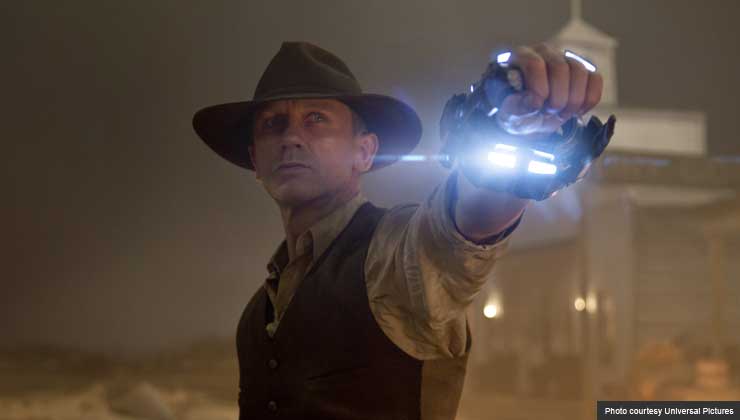 The notion occurred to me while I marveled at the masterful new science fiction/western clone, Cowboys & Aliens. As a western, the film churns up enough trail dust and gunpowder to choke John Wayne’s horse. As science fiction, it unleashes fantastic technologies and hideous monsters right out of Cloverfield and War of the Worlds. The dichotomy of the two genres is established right from the start, and by the climactic Shootout at the Extraterrestrial Corral we’ve passed between them so many times the borderline has been thoroughly trampled.

The plot is as delightfully clear as the title: Late in the 1800s, America’s frontier is invaded by unfriendly, super-sophisticated creatures from outer space, and all the local white settlers and Native Americans have to fight back with are bows and arrows, six-shooters and the occasional stick of dynamite.

Who’ll win? Put it this way: In their corner, a bunch of slimy, scary killing machines that run faster than a puma and impale their enemies with dagger-like arms. In our corner: Indiana Jones and James Bond. That’s right — Harrison Ford and Daniel Craig are all that stand between the Wild West and Armageddon, and in the end, it’s not really a fair fight.

As an outlaw who finds himself an unwilling combatant against interstellar forces, Craig creates an intriguing character — lean, craggy and quiet, sort of an athletic  Gary Cooper. Ford, playing a bitter, bleak-hearted cattle rancher, seems more in his natural element, growling at the grownups, allowing a reluctant smile in the direction of the children and basically kicking alien butt as only Indy/Han Solo could, even way past retirement age.

They’re surrounded by a terrific supporting cast, including Sam Rockwell as a bartender whose wife has been abducted, and Keith Carradine as the sheriff, a man who already had his hands full keeping the peace between the townsfolk and the cattlemen, and who now has a bunch of bloodthirsty ETs to reckon with. (In a nice touch, the locals — who lack the benefit of 60 years of Hollywood sci-fi flicks as reference — call the aliens “demons.”)

So, is Cowboys & Aliens a western or a sci-fi thriller? It depends on how you look at it. If Sam Peckinpah had made Close Encounters of the Third Kind, it might have looked a lot like Cowboys & Aliens. If Steven Spielberg (a producer of this film) had directed The Wild Bunch, I could imagine it turning out a lot like this.

As it is, director Jon Favreau — rapidly becoming one of my favorites in the wake of Iron Man and Elf — has pulled off a puzzle of cosmic proportions.