The visual wonders of Oz the Great and Powerful, Disney's new prequel to The Wizard of Oz, begin with the opening credits — a dizzying journey through a maze-like world seemingly created from paper cutouts, the names of the cast and creators mounted on sticks thrust into place by unseen hands.

See also: Your picks for the greatest movies ever made 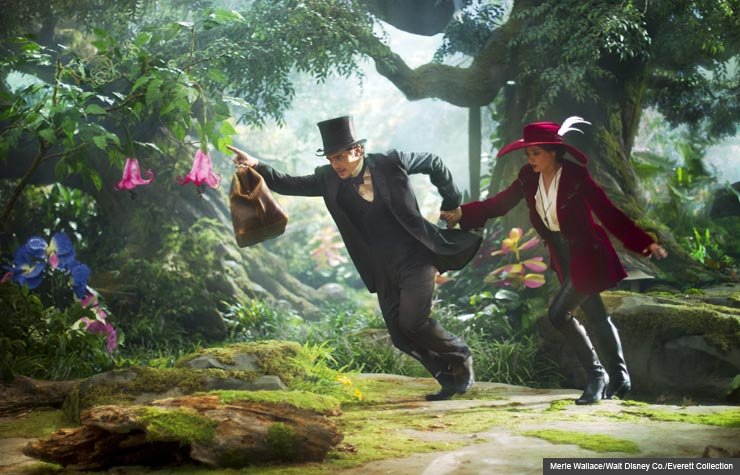 James Franco (as the Wizard) and Mila Kunis (the Wicked Witch of the West) in "Oz the Great and Powerful."

Of course, that homemade look required hours upon hours of computer time; millions of 0s and 1s tediously entered by some nameless Silicon Valley programmer. The trick of the effect — along with the rest of the dizzying visuals to follow in Oz the Great and Powerful — is to hide all that hard work.

From the earliest days of movies, the best cinematic effects have never let us see the man behind the curtain. If you'll let it, Oz the Great and Powerful will soon have you forgetting that this is yet another scenic wonder from Disney's dream factory.

Director Sam Raimi (of the Spider-Man trilogy) and production designer Robert Stromberg (Avatar) have created a universe where witches convincingly commute via bubble and broomstick, where monkeys and baboons sprout wings, and where the darkest of dangers stand in stark contrast to a dazzlingly beautiful, impossibly fanciful countryside.

There is, of course, a story attached to this new visit to Oz. It's the genesis of the Great Man himself, of how he rose to become "the great and powerful Oz" from humble beginnings on the plains of Kansas. (You'll remember that, in the 1939 classic The Wizard of Oz, the Wiz confided to Dorothy "I'm a Kansas man myself!")

As the transplanted Wizard, James Franco is all dimples and charm — a con man caught in his own net of bravura. There's a trio of witches here: two wicked or wicked-ish (Rachel Weisz and Mila Kunis) and one good (Michelle Williams). Williams and Weisz have it easiest; their characters are mean and nice in ways not foreign to certain church ladies I have known over the years. Kunis, on the other hand, has the thankless task of playing a younger version of the green-skinned, pointy-chinned Wicked Witch of the West. Her performance serves only to remind us of how truly difficult it is to convincingly play over-the-top evil in the manner Margaret Hamilton did in the Oz we all grew up with.

And this is where Oz the Great and Powerful begins to break down around the edges. This film is not, as are most Oz versions, a reimagining of the Oz myth.

Oz the Great and Powerful intends to set itself down right next to the MGM classic, enlarging not just on themes and characters created by L. Frank Baum in his Oz books, but also on the unique vision filmed more than 70 years ago by the wizards of MGM. That bold intent is declared from the outset, in a black-and-white prologue that yields to color only when the Wizard's balloon arrives in Oz. And it's repeated throughout as we glimpse the art deco-inspired Emerald City, an abortive musical number in Munchkinland and the measured march of the Wicked Witch's guards.

There is genius in Oz the Great and Powerful, to be sure, but because we've been down this very same vision of the Yellow Brick Road so many times before, the creative stakes are set so high that anything less than a modern-day classic becomes something of a letdown.

Oz the Great and Powerful does add one truly wonderful character to the cinematic legacy of Oz: the China Girl, a child made of fine bone china, orphaned when the Wicked Witch's army ransacked her home, a place called China Town. It's no insult to Oz's flesh-and-blood actors to say the animated China Girl, delicate and sweet, gives the film's most touchingly real performance. We glimpse the young actress who gives her voice, Joey King (first seen as a child in a wheelchair in the Kansas prologue), a poignant foreshadowing of China Girl's emotional and physical fragility.

If you see Oz the Great and Powerful with a little girl, she will emerge from the theater wanting a China Girl of her own. And you will want to give her one.

And that made me realize what was missing from Oz the Great and Powerful, and the reason why, no matter how nobly and respectfully it tries to build on the 1939 version, the film remains a mere echo of it. What's missing is Dorothy — not Judy Garland, but the girl herself. At the heart of The Wizard of Oz is Dorothy's oft-stated desire to go home. It's what propels her along the Yellow Brick Road; it's what compels her to hunt down the Wicked Witch.

Franco's Wizard has no desire to go back to the black-and-white dust bowl that is Kansas. In Oz, he's virtually worshipped and certainly rich beyond his wildest dreams. Back in '39, the Tin Man yearned for a heart; the Scarecrow wanted a brain. Here, Oz's monkey sidekick is bound to him by an ill-advised oath, and even the sweet little China Girl is motivated by a thirst for revenge against the Wicked Witch.

Oz the Great and Powerful has brains to spare. But as thrilling and ingeniously conceived as it is, this Oz never quite finds its heart.