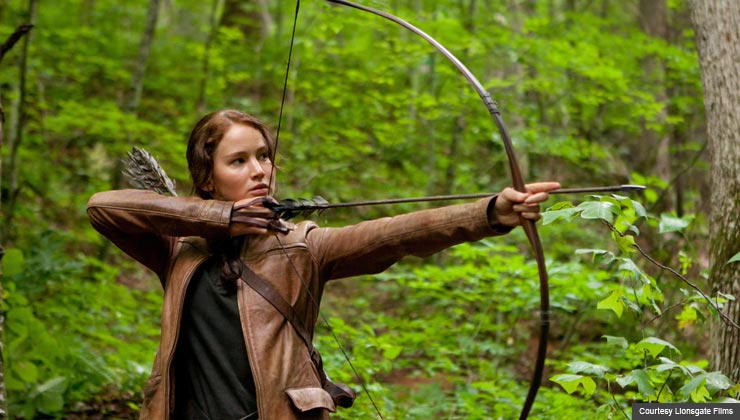 In The Hunger Games, Katniss Everdeen (Jennifer Lawrence) volunteers to take her younger sister's place in a fight to the death live television show.

Have you seen The Hunger Games? Comment on the article or take your opinion to our Movies for Grownups message boards. What did you think? Agree with our review?

En español | If you haven’t read The Hunger Games, Suzanne Collins’s first installment of her best-selling trilogy, you’ll still enjoy this movie. And while the target audience for the books and film is the teenage Twilight crowd, there’s plenty of material here for grownups, including observations — intentional or not — from Collins and director Gary Ross (Seabiscuit) on violence, warfare, modern-day entertainment and society’s increasing class divides.

The Hunger Games is set in a futuristic North America that has survived wars and near-apocalypse. We’re left with a nation, called Panem, governed by a dictatorial Capitol, nestled in the area of the Colorado Rockies, where wealth — no, gluttony — abounds. The rest of the land is divided into 12 districts that serve the needs of the Capitol; the people of the districts remain suppressed and intimidated by the Capitol largely because of the Hunger Games, a punishment for the people’s rebellion 74 years earlier. Each year, on Reaping Day, a teenage boy and girl are selected, either by lottery or volunteer, from each district and entered into a nationally televised fight with one another until only one survivor (literally) remains. A twisted reality show, yes, and the residents of the Capitol love it!

Our heroine is Katniss Everdeen, a 16-year-old girl from District 12 (a coal mining area) who volunteers to enter the games in place of her beloved younger sister, who is selected by lottery. The extremely talented Jennifer Lawrence (of Winter’s Bone) was perfectly cast for this role, and she carries the film. Her fellow fighter (and love interest) from District 12 is Peeta Mellark, played by Josh Hutcherson (of The Kids Are All Right). The chemistry between Lawrence and Hutcherson is weak, probably to be ignited in the expected next of two more episodes, and Hutcherson has that adolescent appeal teens may love, but we won’t. Still, Woody Harrelson as Haymitch Abernathy, the heavy-drinking one-time Hunger Games victor and mentor to Katniss, offers a fascinating portrayal, as does Stanley Tucci as Caesar Flickerman, the Geraldo Rivera-style TV interviewer for the games telecast, and Donald Sutherland as President Coriolanus Snow, the cold-hearted despot of Panem.

Imax viewing of The Hunger Games will only enhance audience appreciation of the spectacular cinematography here: the landscapes of the districts appear appropriately grim and gritty, while those of the Capitol are magically surreal. I found the shaky handheld camera shots of District 12 and the games arena overdone to the point of being nauseating, and completely unnecessary as the other elements of the film come together to convey sufficient tension and drama. Director Ross did a terrific job of communicating the horror of the games while limiting the explicit violence, somewhat, on screen.  Without hitting us over the head, a la Avatar, Ross also employed nifty 21st century tech stunts, as the game masters unleash hologram tiger-like beasts and roaring fireballs upon the players — or tributes, as they are called — with a tap on a touch screen. Equally admirable was Ross’s adroit scripting, with the help of Suzanne Collins and writer Billy Ray (State of Play), along with the actors’ adaptation of dialogue, to mimic unmistakably our culture’s fascination with reality and entertainment TV.

Through those elements, Collins and Ross make clear their messages about our modern-day entertainment/celebrity obsessed culture.  But what I most liked about The Hunger Games was the subtext it offered up on nationally sanctioned warfare, and the effect that has on the kids who sign up for it, voluntarily or involuntarily. The tributes in the games, while in the face of the most illogical, inhuman battle, refer routinely to making their districts proud, but if you watch The Hunger Games closely, you’ll also witness how hollow a goal that ends up being, for them and for the audience.

You may also like: Get some comedy relief wiith Will Ferrell.