Jennifer Grey Breaks Out of the Corner

The star explains ‘Dirty Dancing,’ young heartbreak, wisdom in age and her memoir ‘Out of the Corner’ 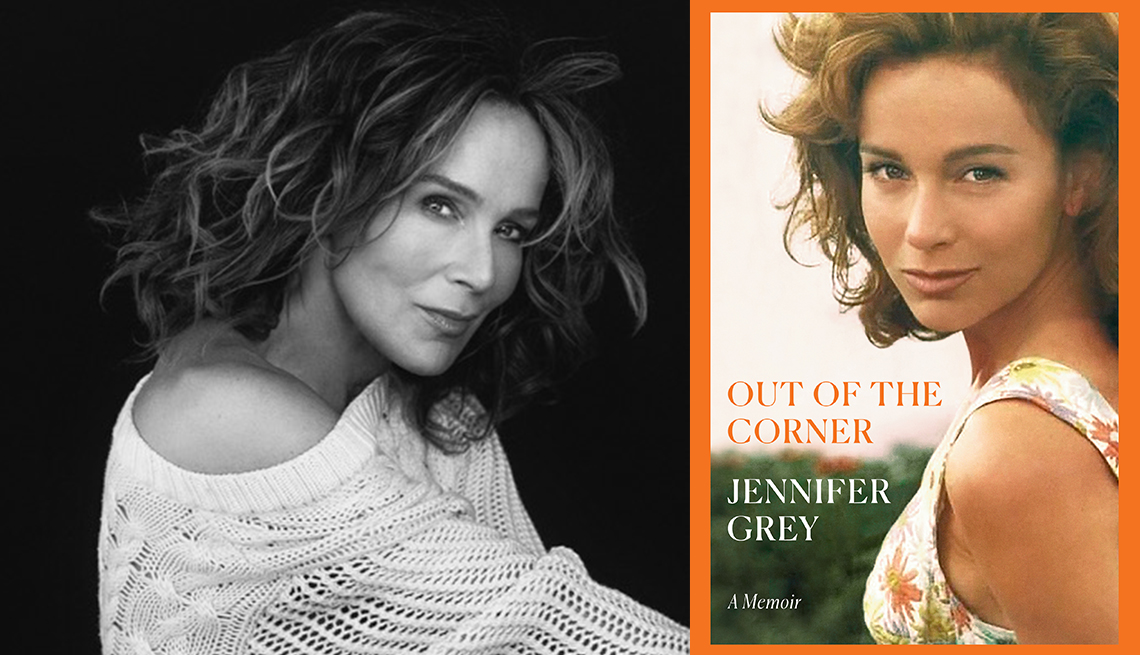 In her new book, Out of the Corner, Jennifer Grey tells a life story as wildly entertaining as the 1987 movie that catapulted her to fame, Dirty Dancing. The daughter of Oscar-winning, closeted-bisexual Joel Grey, she was a fast-lane teen, frugging and drugging at Studio 54 and singing show tunes with Stephen Sondheim at parties.

After Francis Ford Coppola cast her, at age 24, in The Cotton Club, her life got even starrier: She won overnight fame as Baby Houseman, the dirty dancer hoisted to glory by Johnny Castle (Patrick Swayze). She then got engaged to Matthew Broderick, whose bad-boyfriend behavior inspired her close friend Madonna to write the hit “Express Yourself” about their relationship. Weeks later, Grey got engaged again, to Johnny Depp — and had another traumatic breakup. Soon after came what she calls “schnozzageddon”: the calamitous nose job that made her unrecognizable, and abruptly less employable — right when tabloids erupted with photos of Depp smooching his new love, Winona Ryder, the sweet teenage friend who used to live next door to Grey.

As she turned 30, Grey writes, she felt “ablaze like an emotional dumpster fire.” But now, at 62, she feels just fine, looking back on tumultuous times with grownup aplomb, and looking forward to the Dirty Dancing sequel she’s producing. She told AARP about her memories — and how not to let fate put you in a corner.

Everybody remembers Dirty Dancing, but a year before that, you played Broderick’s surly sister in Ferris Bueller's Day Off (1986). What was it like to be part of that other iconic, generation-defining film?

By far the most fun I’ve ever, ever had in my life, creatively on a movie set, or anywhere, period. Director John Hughes and I just fused our energy, brought out the best in each other. I heard his dog whistle, and he heard mine. I took risks improvising, kind of free-falling — it was so exhilarating! It’s a great feeling when you feel like somebody really sees like you. It’s not dissimilar from the Dirty Dancing characters of Baby and Johnny, where we’re more than each appears when we’re together.

And yet, at first you weren’t thrilled that Swayze was to costar with you in Dirty Dancing. In 1984, when you costarred in Red Dawn, John Milius’ movie about young, mostly macho-male Americans fighting a Russian invasion, he lit firecrackers outside your room.

He didn’t do anything wrong! It was pranks, boys being boys. Milius told him, “You be the leader of the group,” and he took the role seriously. I was a fish out of water, a girl, not a fan of that genre, shooting AK-47s, trying to hang with the boys. I was nervous. So when I heard he was cast in Dirty Dancing, I was, like, “Oh, no. He’s not right.... I was dead wrong.”

So your amazing performance together as Baby and Johnny was not like Debra Winger and Richard Gere, whose mutual loathing made their on-screen romance sizzle in An Officer and a Gentleman?

Everyone talked about it, and it looked really hot. I heard that famous story while I was making Dirty Dancing. But Patrick and I never had that kind of tension at all. I did think, well, it’s possible to not have a crush on him and still have it be hot. I wasn’t pining for him. And that was perfect, because we were two people who wouldn’t naturally mix. And in the story, we were two characters from different worlds. So needing to push ourselves into a situation that was not natural created a certain energy, which worked in our favor. That tension can look hotter than being gooey and lovey with each other.

In Red Dawn, your guerrilla warriors battle Russians under a banner that says “Wolverines,” after their high school mascot. How do you feel about the news that young Ukrainians are now battling real Russian invaders — and flying Wolverines banners?

I saw that! It’s so meta, right? It’s like life recreating art recreating life. It’s just bananas. It’s like Everything Everywhere All at Once — the multiverse of it all!

What was it like to be engaged to Matthew Broderick and Johnny Depp within a month’s time?

I was so desperate to not feel the feelings I was feeling that I dove straight into another very intense relationship, never processing the sadness that was there. As a wise old lady, I can look back and go: That’s just the insanity of youth and medicating pain. The 1989 Johnny Depp was exactly what I needed — like shaking an Etch A Sketch, it just shook it all away. Like a Band-Aid that covered up the infection without cleaning it.

And after your infamous nose surgery, you had the bizarre experience of running into Michael Douglas — and he didn’t recognize you. An airport employee told you, “I’ve seen Dirty Dancing a dozen times. I know Jennifer Grey. And you are not her.”

Those are just two examples. It happened everywhere I went, all the time, every day, everywhere, for years.

That would make an interesting movie right there.

That’s what I’m saying. It was like being in a Twilight Zone episode. It was horrific. And then to be blamed, and misunderstood, was just adding insult to injury.

Did looking back and writing the book make you feel like you’ve finally come into your own identity?

Having my identity dramatically eradicated overnight was the hardest thing I’ve ever been through, and one of the most defining moments. The thing that I love the most about it, is that it forced me to really come to grips with who I really am, and who I know myself to be.... It was a very, very difficult trial by fire. Like a hero’s journey. Being told I wasn’t me made me really have to dig deep and figure out who I actually was. And that became something that nobody would ever be able to take from me.

A lot of celebrities fear aging. Is it bad being a grownup, just as you once thought it would be?

I think that is one of the biggest lies that our culture tells us, because I am 100 percent sure that the second half of a woman’s life is the best half. There is no question in my mind. I’ve never felt happier. I’ve never felt more grounded. I’ve never felt more OK with not knowing what’s coming. Because the resilience that I have experienced, over and over again, has really fortified me in ways that you just can’t know as a child or young adult. Every single trial by fire has made me who I am, and it’s almost like the heat of the adversity has molded me. And now I’ve been forged into this other thing that feels just better than ever!

Tim Appelo covers entertainment and is the film and TV critic for AARP. Previously, he was the entertainment editor at Amazon, video critic at "Entertainment Weekly," and a critic and writer for "The Hollywood Reporter," "People," MTV, "The Village Voice" and "LA Weekly."

How Delia Ephron, 77, Found New Love and a Second Chance at Life

​Valerie Bertinelli Wants You to Be Nice to Yourself

The actress, author and Food Network host opens up about Eddie Van Halen and regrets