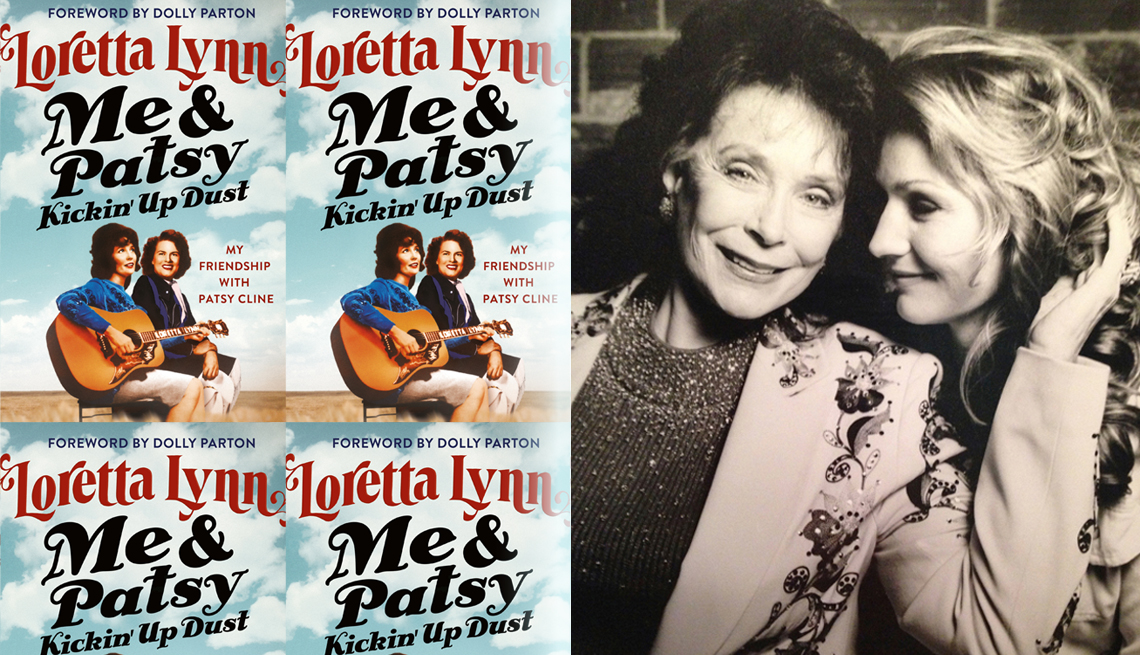 When Loretta Lynn and fellow country star Patsy Cline met in 1961, they developed a fast and profound bond that Lynn, 87, has cherished long after her friend's fatal plane crash two years later.

Lynn describes their brief but intense time together in her new book Me and Patsy Kickin’ Up Dust: My Friendship With Patsy Cline. “She came into my life and changed everything,” Lynn writes. “That's what real friendships do. We made each other better.”

Here, Lynn introduces her story about her remarkable relationship with Patsy:

Most people know me as a country music singer. I've been singing for as long as I can remember. Seems to me I could sing before I could talk. I have a lot of fans and I love every single one. But the truth is I'd rather be writing than singing for a crowd. Writing songs is part of who I am, down deep. It comes natural as havin’ a baby, which I can tell you ain't easy. I've had six! Putting words to feelings is a lot like that — it's hard but worth every minute of pain. I started when I was a young woman, singing for my babies, and I ain't done yet.

I've wrote a lot of songs — over 150, but people don't think of me right off when it comes to books. Maybe it's ‘cause I'm not what you'd call educated. But this ain't my first book. That was Coal Miner's Daughter. I was barely forty-three when I wrote that with a fella named George Vecsey — half the age I am now. Seems funny to think I had a life story to tell yet, but that book became a New York Times best seller. Then, after my husband died, I had some things I wanted to set straight, so I wrote Still Woman Enough, and that book was a New York Times best seller, too.

So why write another book at my age? I'm glad to tell you. See, once upon a time I met this woman, a few months older than me, by the name of Patsy Cline. Likely as anything you know her music, and if you don't, well, you should. Patsy was a popular country music singer. When I first came to Nashville, just a bashful young mother and hoping to make my way in the country music business, she reached out to me. She took me under her wing and became one of my greatest friends in this whole world. She died when we were both still so young. We were here way before Nashville was the destination it is nowadays, with hundreds of thousands of fans coming to see country music artists perform. It was just a little town, really. Me and Patsy bonded close as sisters. As time has gone on, I haven't stopped loving Patsy or thinking about her and talking to her, even. Not for one single day. She changed my life forever.

Patsy Cline taught me a bunch that I'll want to share. Things like how to dress for the stage, how to stand up for myself, how to fight for what's right, and even how to spice up my love life. (I've been holding back telling that story for a long time. Just wait'll you hear it!)

But most of all, Patsy was my confidante and friend. We cooked together, chased after our kids together, helped each other around the house, and talked about our husbands like girlfriends do. I want folks to know how good Patsy was — and not just good at making music, though she was amazing at that for sure. Her voice still sounds like an angel's to me.

To make it you have to be first, great, or different. Between the two of us, I believe Patsy and I had all three covered.

Patsy was the real deal. People throw around the word authentic a lot. But ask anyone who knew her and they'll tell you Patsy Cline was the most real person you could ever meet. With her, it was always what you see is what you get. That's one reason we got along so good. When people are fake, I just can't stand it! Patsy didn't pretend about nothing. She was as real as it gets. So I'm gonna share stories about our time together. Along the way, maybe I'll encourage people to listen to her music. Patsy had the richest, most emotional voice you ever heard. There are lots of her songs worth listening to.

People ask me for advice about how to make it in the music business. Here's what Patsy taught me: Nobody can tell you who you are. Ain't nobody can be you but you. Work hard and stay true to yourself. That's it, pure and simple. It's hard as hell to make it in this business. You gotta work your ass off, and hard work is rare these days. Just ‘cause you've got a nice voice or good looks, that don't mean you're gonna get a hit and be rich and famous. I'm sorry. That ain't happening. Success don't happen overnight. Scratch that. There have been a few one-hit wonders.

The truth is, if you have a girlfriend on your side, somebody who knows the real you and believes in you, no matter what, it can make all the difference in the world. It did for me. Patsy was that friend. We understood each other and we had each other's backs. When you have a friend like that, it changes you. It gives you strength and gives you faith in yourself. That kind of friendship means more than anything. If you don't have one, I hope you'll open your heart to find one. Everybody deserves their own Patsy Cline.

Some people say that Patsy and I changed country music for the good of all women who come after us. I am not bragging on myself, but it makes me deeply proud to hear that. How did we change country music? I guess because we were the first to kick down the golden country music doors. Patsy shut up all those folks who said women can't sell tickets or records. She was the first female country singer to cross over to the pop and adult contemporary charts. She introduced millions of folks to country music and got people who loved her songs to listen to other country artists. She was also one of the first women to headline and sell out her own concerts. And she was the first female to headline in Vegas.

These changes in the early 1960s were major victories for us girls! Back then, Patsy didn't even realize the path she was clearing for all of us to follow. But if it wasn't for the strides Patsy Cline made for us, then I don't know if I would have been able to accomplish all my own firsts, like how I was the first female to ever win the CMA Entertainer of the Year Award and then the first to do it again at the ACM Awards three years later. Those two awards mean so much to me, because they helped every girl singer who came after to stop thinking it couldn't happen for them. Because, friends, if I, Loretta Lynn from Butcher Holler, Kentucky — the one they called a hillbilly and made so much fun of, a working wife and mother of six kids — could bring home the highest honor that could be given in country music, well, then maybe they had some hope themselves.

As I have said many, many times: To make it you have to be first, great, or different. Between the two of us, I believe Patsy and I had all three covered, and she brought out the best in me and I like to think I helped bring out the best in her, too. Now, did we change country music? Well, you better believe we did!

I named my daughter after Patsy. That's how much she meant to me. When I had my twins the year after Patsy died, I named them Peggy and Patsy. If only Patsy had been there for that. She'd have liked it. I traveled so much that I didn't get to spend much time with the twins when they were growing up, but these days me and my daughter Patsy are real close. She's heard all my stories about Patsy Cline. How could I even say the name Patsy without thinking of her? After a while, my Patsy said, “Mommy, we got to get some of these stories down.” I knew she was right.

So that's why you hold this here book in your hands. Putting it together has been bittersweet. It's hurt some, and I've cried more than a few times — kinda like when I write a good song. It's been real good for my soul. I hope you enjoy it as much as I've loved putting it together for you.

Excerpted from the book ME & PATSY KICKIN’ UP DUST: MY FRIENDSHIP WITH PATSY CLINE by Loretta Lynn. Foreword by Dolly Parton. Copyright © 2020 by Loretta Lynn and Patsy Lynn Russell. Reprinted with permission of Grand Central Publishing. All rights reserved.

Available at Amazon.com, Bookshop.org (where your purchase supports independent bookstores), Barnes & Noble (bn.com), and wherever else books are sold.