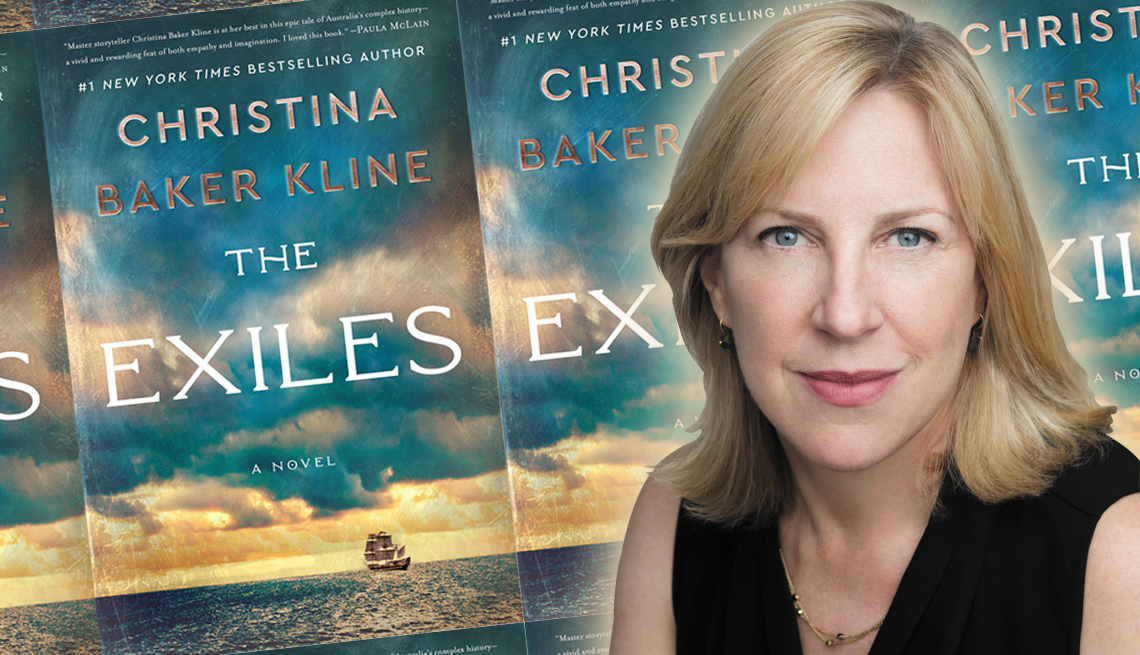 Readers adored The Orphan Train, Christina Baker Kline's 2013 novel — its story based on the real-life trains that would send abandoned East Coast children west to new homes from the 1850s to 1929. It sold at least 3.5 million copies and remained on the New York Times bestseller list for more than two years.

Now she's back with another winner: Set mostly in 19th century Australia, The Exiles focuses on three characters. One is Evangeline: a young governess in London who's pregnant and accused by her angry employer (whose stepson would be the father of the baby) of robbery and attempted murder. She's later sent to a penal colony in Australia.

This part of London was like no place Evangeline had ever seen. The air, dense with coal smoke, reeked of horse manure and rotting vegetables. Women in tattered shawls loitered under oil lamps, men huddled around barrel ﬁres, children — even at this late hour — darted in and out of the road, picking through rubbish, shrieking at each other, comparing ﬁnds. Evangeline squinted, trying to make out what they had in their hands. Was it — ? Yes. Bones. She'd heard about these children who earned pennies collecting animal bones that were turned to ash and mixed with clay to make the ceramics displayed in ladies’ china cupboards. Even a few hours ago she might've felt pity; now she only felt numb.

"There she is,” one of the constables said, gesturing out the window. “The Stone Jug."

In tawdry penny circulars she'd read stories about the dangerous criminals locked up in Newgate. Now here it was, a block-long fortress squatting in the shadow of St. Paul's Cathedral. As they drew closer Evangeline saw that the windows facing the street were strangely blank. It wasn't until the coachman shouted at the horses and pulled hard on the reins in front of the tall black gates that she realized the windows were false, painted over.

A small crowd, idling near the entrance, swarmed the carriage. “Misery mongers,” said the constable with the droopy moustache. “The show never gets old."

The three constables ﬁled out of the carriage, barking at the crowd to stand back. Evangeline crouched in the cramped compartment until one of them gestured impatiently. “Come on!” She hobbled to the lip of the door and he tugged at her shoulder. When she stumbled out of the carriage, he hoisted her like a sack of rice and dumped her on the ground. Her cheeks burned with shame.

Large-eyed children and sour-faced adults stared as she found her footing. “What a disgrace,” a woman spat. “God have mercy on your soul."

A constable pushed Evangeline toward the iron gates, where their small group was met by two guards. As she shufﬂed through the entry, ﬂanked by the guards, the constables behind, she gazed up at the words inscribed on a sundial above the arch. Venio Sicut Fur. Most of the prisoners passing through these gates probably didn't know their meaning, but Evangeline did. I come as a thief.

The gate clanged shut. She heard a mufﬂed noise, like cats mewling in a bag, and cocked her head. “The rest of the harlots,” a guard told her. “You'll be with ‘em soon enough."

A slight man with a large ring attached to his belt, keys hanging from it like oversized charms, was hurrying toward them. “This way. Only the prisoner and two of ye."

Evangeline, the constable with the droopy moustache, and one of the guards followed him into a vestibule and up several ﬂights of stairs. She moved slowly in the leg irons; the guard kept prodding her in the back with a baton. They made their way through a twisting maze of corridors, dimly lit by oil lanterns that hung from the thick stone walls.

The turnkey came to a stop in front of a wooden door with two locks. Rifﬂing through the keys, he found the one he was looking for and inserted it in the top lock, then in the lock below. He pushed the door open into a small room with only an oak desk and chair, lighted by a lamp high on the wall, and crossed the room to knock on another, smaller door.

"Beg your pardon, Matron. A new prisoner.” Silence. Then, faintly, “Give me a moment."

They waited. The men leaned against a wall, talking among themselves. Evangeline stood uncertainly in her chains in the middle of the room. Her underarms were damp, and the irons chafed her ankles. Her stomach rumbled; she hadn't eaten since morning.

After some time, the door opened. The matron had clearly been woken up. Her angular face was heavily lined, her graying hair pulled back in a messy bun. She wore a faded black dress. “Let's get on with it,” she said irritably. “Has the prisoner been searched?”

She waved toward him. “Go to."

Roughly he ran his hands over Evangeline's shoulders, down her sides, under her arms, even, quickly, between her legs. She pinked with embarrassment. When he gave the matron a nod, she made her way to the desk, lit a candle, and sank into the chair. Opening a large ledger ﬁlled with lines of tiny script, she said, “Name."

"Not you,” the matron said, without looking up. “You have forfeited your right to speak."

The constable extracted a piece of paper from the inner pocket of his waistcoat and peered at it. “Name is . . . ah . . . Evangeline Stokes."

She dipped her quill into a pot of ink and scratched on the ledger. “Married?"

The matron looked up sharply, her pen poised over the paper. “Speak precisely, constable, or we'll be here all night. Her offense. In as few words as possible."

He cleared his throat. “Well, ma'am, there's more than one.”

"Start with the most egregious."

The matron raised a brow at Evangeline.

The matron held out the ﬂat of her hand. Then she looked down, writing in the ledger. “Of whom, constable."

"Miss Stokes pushed her down the stairs.”

Out of the corner of her eye, Evangeline saw a small movement where the ﬂoor met the wall: a thin rat squirming out of a crack in the baseboard.

"An heirloom belonging to the owner of the house was found in Miss Stokes's room."

"What kind of heirloom?"

"A ring. Gold. With a valuable gemstone. A ruby.”

"It was given to me,” Evangeline blurted.

The matron put down her quill. “Miss Stokes. You have been reprimanded twice."

"You will not say one more word unless addressed directly. Is that clear?"

Evangeline nodded miserably. The panic and worry that kept her vigilant all day had given way to an enervating torpor. She wondered, almost abstractly, if she might faint. Maybe she would. Merciful darkness must be better than this.

"Assault and theft,” the matron said to the constable, her hand on the page. “Those are the accusations?"

"I understood your implication, constable.” She looked up.

"So the charges are attempted murder and larceny."

She sighed. “Very well. You may go. I'll escort the prisoner to the cells."

Once the men had ﬁled out, the matron inclined her head toward Evangeline. “Long day for you, I suppose. I'm sorry to tell you it will not improve."

Evangeline felt a rush of gratitude. It was the closest thing to kindness she'd experienced all day. Tears gathered behind her eyes, and though she willed herself not to cry, they spilled down her cheeks. With her hands shackled, she couldn't wipe them away. For a few moments her strangled sobs were the only sound in the room.

"I need to take you down,” the matron said ﬁnally.

"You are wasting your breath. My opinion is irrelevant.”

The matron gave a dry laugh. “Oh, my girl. You are new to this."

Setting down the quill and closing the ledger, the matron asked, “Was it force?"

"Pardon?” Evangeline asked, uncomprehending. “Did a man force himself on you?"

"It was love then, was it?” Sighing, the matron shook her head. “You're learning the hard way, Miss Stokes, that there's no man you can count on. No woman neither. The sooner you understand that, the better off you'll be."