Advances in eye implants are saving sight. Find out more in the AARP Eye Center.

"I was an ordinary girl who became an ordinary woman, with one exception: Mother gave me extraordinary will." - Diane Keaton

Diane Keaton couldn’t handle her first glimpse of her mother’s inner turmoil. It was the mid-1970s, and the lovably scattered actress — born January 5, 1946 — was riding high after star turns in two recent Godfather movies and three Woody Allen comedies. On a visit to her parents’ home in Santa Ana, California, Keaton recalls, “I found something I’d never seen. It was some kind of, I don’t know, sketchbook.” 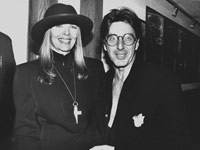 Remember when Diane Keaton dated Al Pacino? See all the stages of her life: the men, the movies, the family. Watch

On its cover was a mysterious title — It’s the Journey That Counts, Not the Arrival — and a collage of family photos assembled by her creative, then-54-year-old mother, Dorothy Deanne Keaton Hall. Inside were Dorothy’s unvarnished thoughts about her 31-year marriage to a power-company engineer named Jack Hall. Addressing “you, the possible reader in the future,” Dorothy warned that her entry of August 2, 1976, would take “courage” to read: It recounted a blowup in which she had called Jack “You frigin’ bastard” and ended with her fuming, “God, who the hell does he think he is?”

“This was raw, too raw,” Keaton recalls in her new memoir, Then Again. “I didn’t want to know about an aspect of Mother’s and Father’s life that could shatter my perception of their love. I put it down…and did not open another one of her 85 journals until she died some 30 years later.”

By the time of Dorothy’s death from Alzheimer’s in September 2008, Keaton had watched her mother struggle with that “strange and cruel disease” for more than 15 years. Steeling herself to learn more about her mother’s personal life — at 63, Keaton had just begun toying with the notion of writing a memoir herself — she began to dip into Dorothy’s journals. What she found there, says Keaton, helped her understand that her mother’s “most alluring trait was her complexity”: An aspiring writer and photographer who had shelved her career ambitions to raise four children in Santa Ana, California, Dorothy came to life between the lines of her sketchbooks as a woman with “a poet’s appreciation of language” and “an artist struggling to find a medium,” according to her daughter.

“Every living person should be forced to write an autobiography. They should have to go back and unravel and disclose all the stuff that was packed into their lives .… If I would be totally honest, I think I could reach a point where I’d begin seeing ME in a more understandable light.” —Dorothy Deanne Keaton Hall journal entry, 1980

“I wish she had [written her autobiography]. And, because she didn’t, I’ve written not my memoir but ours .… I’ve placed her words beside mine, along with … other materials that document not just our lives but our bond. I want to hold my life up alongside hers in order to, as she wrote, reach a point where I begin to see me — and her — in a more understandable light.” —Diane Keaton (Dorothy’s daughter) in Then Again, her memoir due out Nov. 15.

“From the outside looking in,” Keaton confides, “we lived completely different lives. She was a housewife and mother who dreamed of success; I am an actor whose life has been — in some respects — beyond my wildest dreams. Comparing two women with big dreams who shared many of the same conflicts and also happened to be mother and daughter is partially a story of what’s lost in success contrasted with what’s gained in accepting an ordinary life. I was an ordinary girl who became an ordinary woman, with one exception: Mother gave me extraordinary will. It didn’t come free.”

Some of the journal entries were eerily prescient of Dorothy’s fate: In a 1975 passage lamenting the “waves of insecurity” that assailed her, for example, Dorothy had written, “I’m no one to anyone. People look at me and see a midlife woman on the downhill slide. 55 is approaching. My brain is getting thinner. If there’s one thing I don’t want to lose, it’s my ability to think.”

A cascade of more revealing confessions would follow, ranging from the mundane to the certifiably “raw, too raw”: loneliness, depression, thoughts of suicide, and abuse from a husband whose explosive temper once left Dorothy with “red bruises on my face [and] black and blue marks on my arms and legs.”

Painful as those passages must have been for Keaton to uncover, Dorothy’s journal entry from a June day in 1993 hit her hardest of all. Written “in a shaky hand,” it consisted of two stark lines: “This is the day I heard I have the beginning of Alzheimer’s disease. Scary.”

But “she kept writing,” Keaton marvels throughout Then Again. In a remembrance that dissolved the actress in tears as she tried to read it aloud at a book-industry gathering in May, Keaton describes the anguish of watching her mother succumb to the “tyranny” of Alzheimer’s twice — once in person, and a second time through the pages of her journals: “When she could no longer write paragraphs, she wrote sentences like Would we hurt each other less if we touched each other more? and Honor thyself. And short questions and statements like Quick. What’s today’s date? Or odd things like My head is taking a turn. When she couldn’t write sentences, she wrote words. RENT. CALL. FLOWERS. CAR. And even her favorite word, THINK. When she ran out of words, she wrote numbers, until she couldn’t write anymore.”

So no la-di-da beach read is Then Again. Loving and longing, sentimental but unsparing, it is Keaton’s unguarded effort to comprehend her own life by examining her mother’s — and recording those two undertakings in tandem. At this, she has succeeded movingly.

But Then Again is a shared memoir, and as such it abounds with intimate details of Diane Keaton’s own, much-better-known life. She paints a portrait of herself at Santa Ana High School in the early 1960s as a “drifty dreamy type” who got a C-minus in English and flunked algebra. But Keaton lit up the stage — and the audience — playing Nancy Twinkle (and singing “Mata Hari”) in Little Mary Sunshine. Only through the “explosion” of applause that greeted her performance in that role, Keaton writes, was she finally able to win the approval of her distant, hypercritical father (darkly described elsewhere in the book as “the enemy we kept close”). On the night of her Sunshine stage triumph, Keaton could tell from the tears filling his “piercing light-blue eyes” that Jack Hall “was startled by his awkward daughter — the one who’d smashed into the new Ford station wagon with the old Buick station wagon, and spent a half hour in the bathroom using up a whole can of Helene Curtis hairspray. For one thrilling moment I was his Seabiscuit, Audrey Hepburn, and Wonder Woman rolled into one.”

Next: Keaton was slow to embrace the let-it-all-hang-out ethic. >>

Emboldened by hits like those in the minor leagues, Keaton left home in 1965 (at age 19) to study acting under Sandy Meisner at Manhattan’s Neighborhood Playhouse School of the Theatre. By 1968, she had landed a role in Hair on Broadway. Yet as one unintentionally comedic letter home makes clear, Keaton hadn’t quite embraced the let-it-all-hang-out ethic of the times: “It’s a really weird show, to put it mildly .… We look like hippies; we sing like hippies; we’re the turned-on youth of today. It doesn’t really appeal to me!” Cast members who got naked on stage stood to pocket an extra $50 per night; according to IMDb.com, the reluctant Aquarian collected not a single bonus.

Then came Keaton’s legendary association with Woody Allen, a professional and romantic collaboration that would make her the leading lady of filmed comedy in the 1970s thanks to Play It Again, Sam (1972), Sleeper (1973), Love and Death (1975), and Annie Hall (1977). (About 1978’s Interiors, the less said the better.) The Allen-Keaton alliance was forged in the fall of 1968, when Keaton showed up for — and nailed — an audition for the role of Linda Christie in Allen’s stage production of Play It Again, Sam. “During rehearsals,” she reveals, “I fell for [character] Allan [Felix] as scripted but for Woody as well. How could I not? I was in love with him before I knew him. He was Woody Allen.”

Keaton keeps the disclosures coming throughout Then Again. Among the juicier tidbits, we learn that:

Keaton may have “never found a home in the arms of a man,” as she muses here, yet she has found much to treasure in this honest and hard-hitting long look back. Above all, Then Again gave her a way to keep her mother from disappearing, “even though she has.” Dorothy Deanne Keaton Hall “continues to be the most important, influential person in my life,” Keaton tells us, so it’s fitting that her memoir captures such a vivid dual portrait of mother and daughter. Dorothy’s message never wavered, Keaton recalls — nor did the efficacy with which her daughter put it into practice: “Don’t be so sensitive, Diane. You’ll show them one day. Go for it.”

Allan Fallow is the books editor of AARP The Magazine.