Although millions of people travel to New York every year to see live shows, few realize that there are many opportunities to go behind the curtain. Such legendary theaters as the Metropolitan Opera, Carnegie Hall, Radio City Music Hall and the homes of some Broadway and off-Broadway hits offer backstage and behind-the-scenes tours that you might want to include in your next New York itinerary.

• Memories of a Home in Carnegie Hall

Tours of the Metropolitan Opera in Lincoln Center ($16; student tickets $10) offer a glimpse of all the behind-the-scenes work that goes into an opera production. Group members get a chance to visit the costume, wig, scenic and carpenter shops and speak with crew members. They'll also see two or three rehearsals being conducted in rehearsal rooms.

There's no guarantee that singers on break will come out to meet the tour group members, but it can happen. For Bob Greene, who has volunteered as a Metropolitan Opera Guild tour guide for 10 years, one of his favorite "celebrity" sightings was running into a trio of ponies backstage at the Metropolitan Opera. "They were going to audition to be the unicorn in Verdi's opera, Falstaff," he says.

The tour's finale brings the group into the auditorium as the stage is being set for that night's performance.

Classical, jazz and pop memorabilia bring to life the musical history recounted by docents who lead the Carnegie Hall Tour ($10.00; $8.00 students/seniors; $4.00 ages 12 and younger). Autographed photos line the halls and carry messages written by everyone from Sir Thomas Beecham to Stevie Wonder to Shawn Colvin.

Carnegie Hall owns many historic documents and artifacts that inspire a sense of awe befitting the concert hall whose first performance was conducted by Tchaikovsky. During the tour, visitors pass by framed original letters written by Berlioz, Mahler and Ives; two bars of Rossini's Mi lagnerò tacendo written in the composer's hand; and a sheet of staff paper on which Beethoven wrote out Wellington's Victory.

The tour includes a visit to the auditorium, where groups may get to sit in on a few minutes of a rehearsal. It concludes in Carnegie Hall's Rose Museum, whose walls of display cases contain additional photos, archival material and artifacts such as rare records and one of the clarinets that Benny Goodman made sing, sing, sing. 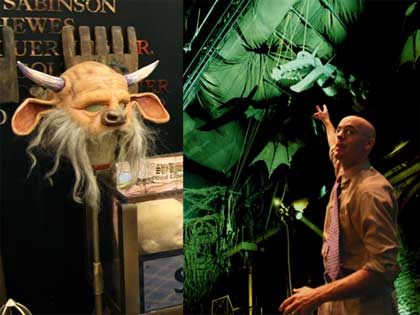 Courtesy of Wicked Behind the Emerald Curtain

"Wicked" Behind the Emerald Curtain tour and paraphernalia.

Wicked at the Gershwin Theatre

Want to know what goes into making a Broadway show? Ask Anthony Galde and Sean McCourt, cast members, co-creators and co-hosts of Wicked: Behind the Emerald Curtain ($35.00). Every Saturday morning, the two "set up a museum" in the lobby of the Gershwin Theatre to offer an up close look at the show's costumes and set materials.

The tour group goes into the house to see films that introduce the creative team. Galde and McCourt show where crew members sit, explain how lighting and automation work in the show, and hold a question and answer session that sometimes spills over into the lobby after the tour has officially ended.

Galde, who plays a rotation of nine roles in the show and usually learns which role he'll play an hour before the curtain rises, loves the audience contact.

"That's what's been so awesome for us. It's very cathartic to be as passionate as we are and to be able to get in front of the people that are the reason we're working."

If by now you've been bitten by the theater bug, check out the Radio City Music Hall Stage Door Tour ($18.50; $15.00 ages 62 and older; $10 ages 12 and younger). When performance schedules permit, tour group members can stand on the great stage and run through their best high kicks or air guitar moves.

Visitors get to meet one of the Radio City Rockettes, who will spend some time answering questions about their auditions, rehearsals and performances. The tour through the classic art deco building includes a stop in "The Roxy Suite," the opulent apartment maintained within the theater by Samuel Lionel "Roxy" Rothafel, the impresario who opened the theater and for whom the famous kick line (originally the "Roxyettes") was named. And a new interactive photo technology addition to the tour allows the group to join in a virtual Rockettes kick line.

When planning your New York theater and concert outings, visit this reference page on the website of the Mayor's Office of Film, Theatre and Broadcasting, where you'll find links to resources such as a history of theater in the city and a database of theaters and seating plans. For further urban stargazing, the city also maintains a list of local film and television productions and a guide to joining the studio audience at a television taping.