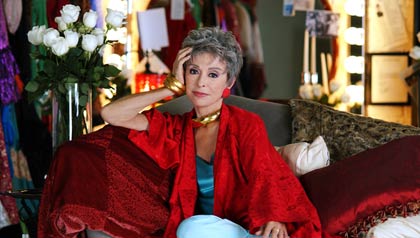 En español | “I feel like I could go on forever,” says Rita Moreno, musing on the latest chapter of her life and career. The Tony, Oscar, Emmy and Grammy winner is back onstage. And on TV. And is planning to write a book about her life. “I’m this year’s Betty White,” she jokes during lunch on one of the patios at her home in the Berkeley Hills of California.

The levity belies the difficult year Moreno, 79, has had. First her husband died; then she underwent knee-replacement surgery. Yet, just two months out of the hospital, the actress and dancer was back performing onstage — in a chair. She's spent this summer commuting up and down the California coast, taping a new sitcom in Los Angeles and rehearsing a new play in Berkeley.

Her stunning home with a large front patio and an outdoor fireplace is a few minutes from the theater where she's played strong women like soprano Maria Callas in Master Class, Amanda Wingfield in Tennessee Wiliams’sThe Glass Menagerie and, soon, herself.

Life Without Makeup, Rita Moreno’s story, will premiere at the Berkeley Repertory Theatre in September. Written by Tony Taccone, the theater’s artistic director, the play is the culmination of many often emotionally grueling hours of interviews with the actress.

Onstage, Moreno (née Rosita Dolores Alverío) recalls the stormy sea voyage from Puerto Rico to New York with her family when she was 5. She describes the apartment they shared with three other families, the sweatshop where she and her mother worked, and the dance classes. At 9, she says, she was “working the bar mitzvah circuit as a miniature version of Carmen Miranda.” Her mother made her the fruit-decorated hat.

Later, to support her mother and a string of consecutive stepfathers, she took on a number of film roles she considered degrading and an assault on her dignity: a mute runaway Indian slave, a Polynesian in a sarong, an Arab in a turban. And even after her heralded success in West Side Story, she was offered mostly roles as gangland girlfriends, mothers of gang members or whorehouse madams.

Next: All about her one-woman show. >>

In her one-woman show, Moreno dishes on the men — mainly her tumultuous relationship with Marlon Brando (who was jealous of Elvis Presley, less so of her dates with Howard Hughes). She describes sexually predatory tycoons and moguls she met throughout her career, and relives a blind date with a man named Lenny Gordon, who became her husband of 35 years until his death in 2010.

The star’s immense musical talents are showcased in numbers from The Electric Company and West Side Story, and standards such as “Stormy Weather” and “Broadway Rhythm.”

Moreno regales the audience with behind-the-movie-set stories about the making of West Side Story. About director Jerome Robbins, she says, “The man was a flat-out genius,” although his artistic vision at times reflected some unenlightened choices. “We were all lumped together into a gang of darkies,” Moreno says in the play. Robbins insisted that the Puerto Rican characters speak in accents and wear the same dark make-up: “pancake makeup number 10, appropriately called Texas Dirt.”

Breaking through barriers and breaking away from Hispanic stereotypes has been “a ferocious struggle much of my life,” Moreno says. But that's changing. She's now playing a Jewish mother in Fran Drescher’s new sitcom, Happily Divorced,” which premiered in June on TV Land. “You know,” says Moreno, finishing her lunch, "I never thought I’d live to see this day when there would be people like myself playing an old Jew. And I love every minute of it.”

And Moreno makes it clear in the show that she doesn't intend to stop. "People say that when you get to a certain age that you start to mellow,” she says. “They say as your bones start to calcify, you have to slow way down. ... Mellowing has never done much for me. ... I figure if I keep my spirit in shape, the bones will take care of themselves."

Next: Why did Moreno decide to stage an autobiographical one-woman show now? >>

AARP VIVA: Why did you decide to stage an autobiographical one-woman show now?

RM: I think a lot of people don’t have a clue about my life. I have all of these awards and they don’t know the struggles behind all of that. During Master Class, I used to regale Tony [Taccone, the play’s director] with stories about Hollywood, another Hollywood that doesn’t exist anymore, and he said, "Really, you’re a dinosaur. You should write about this because nobody’s going to know about that part of Hollywood." And about two years ago, he said, "You know, you’re 78 now. I’ll ask you one more time." And I thought, "He’s right.”

AARP VIVA: Tony Taccone wrote the script for this play. What's it like to read a script about yourself?

RM: We spent a year and half with Tony interviewing me every week. He told me it would be three hours at a time, and I said, “That’s nothing, you know, I’m a chatterbox.” But those sessions were killer. I was whipped and so was he because he got very involved in the story, too. He saw every movie I’ve ever made, which is a curse. He had to see some of these ghastly Westerns where I play little Indian maidens and stuff. I was playing anything that had a dark skin. It was very necessary to see these dreadful movies to understand my plight. They were humiliating kind of parts. I didn’t watch those again.

AARP VIVA: Your husband, Lenny Gordon, died last year at 90. This must have been a very hard year.

RM: He carried me through some really difficult times in my life. But you know, two months after Lenny died, I had my knee surgery; and two months after that, I did my first show sitting in a chair. I owed some concerts, and I'm nothing if I'm not responsible. It actually turned out to be a great thing. It distracted me. Suddenly I was loved again — only this time by the public instead of just Lenny. You just do it, and in a way, it makes you strong.

AARP VIVA: This year you’ll be turning 80. Are you going to slow down?

RM: Hell no! I mean, no, not at all. It’s what I do. You know, it will come quite undoubtedly, when the other knee will go or something, but I just don’t think that way. I’m in a great place right now. And I think I’m in a great place essentially because I have the work. And I am very close to my daughter and my little guys [her grandchildren].