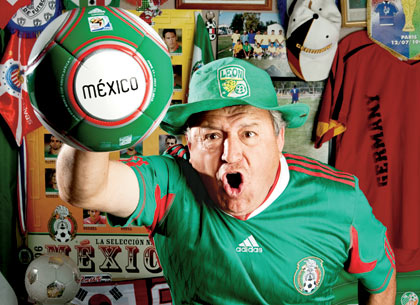 En español | For diehard soccer fans, the World Cup is the ultimate destination. It's like making a pilgrimage. Or climbing to the peak of Mt. Everest. It's not just a place, it's a life goal. These three Hispanic fanáticos will be among the throngs of flag-waving, drum-pounding, wig-wearing loyalists when the 2010 World Cup kicks off in South Africa.

Hand Eutimio Guerrero a trumpet; red, white, and green face paint; and El Tri jersey. And he's ready. He serenades spectators with "Cielito Lindo" and mariachi tunes, and sneaks in a bottle of tequila to share. "We go a little bit insane," he says. "My love for Mexico and soccer takes over my brain, my heart."

Growing up in León, Mexico, kicking soccer balls on the streets of his poor neighborhood, he'd pretend to be playing in the World Cup, never imagining he'd attend one. In June the 62-year-old from Coachella, California, will once again be in his own corner of nirvana when he arrives in South Africa. "It's beyond my wildest dreams," he says. He was in the stands when Mexico played in other Cups: 2006 in Germany, 2002 in South Korea/Japan, and 1998 in France.

He has high hopes for Mexico, which will play South Africa in the opener. The field includes a promising U.S. team, five-time winner Brazil, plucky Honduras, star-studded Argentina, two-time champion Uruguay, Chile, and Paraguay. Mexico plays Uruguay and France in Group A. Coach Javier Aguirre has assembled one of the world's youngest squads, with seven players under age 25. One is Guillermo Ochoa, who reminds Guerrero of León goalkeeper Antonio Carbajal, his boyhood favorite.

Back then, "My friends and I used to wash cars in exchange for game tickets," he says. Now, he sponsors León's team and plays for an over-48 team. His success in business–he owns four restaurants and a supermarket–allows him to go to South Africa: "I've worked hard, led an honest life, and the World Cup is my reward."

If you ask Miami Beach banker Pablo Gil, 45, the World Cup is part costume party, part carnival, and part theater of the absurd. Argentina-born and raised, he recalls celebrating all night when his homeland won the 1978 Cup in Buenos Aires.

"It's hard to explain, but soccer just absorbs you," says Gil, who took his 71-year-old father to the 2006 Cup and will go to South Africa with a friend. "You feel such joy. You also see people crying like babies when their team loses."

For Gil, a sense of anticipation has been building for 24 years. He believes Argentina can hold the golden cup aloft for the first time since 1986. Argentina–led by Lionel Messi, whom Gil considers the best player in the world, and coached by Diego Maradona, one of the best players in history–joins Brazil, Spain, England, Italy, Germany, and the Netherlands as a favorite.

"I saw Messi the teenager score four years ago against Serbia-Montenegro, and it felt like the whole stadium would fall down," Gil says. "Let's see if he can take Argentina all the way."

Gil grew up in Córdoba following River Plate. He admired Daniel Passarella, but his idol was Maradona. For talented Argentina, grouped with Nigeria, South Korea, and Greece, the biggest uncertainty is Maradona, Argentina's polarizing living legend who is given to impulsive decisions and rages.

Gil's fondest memories are of game days and cooking feasts with family and friends. "The World Cup has that same party spirit," he says. "You're at an international event but each fan's identity is tied to his team. In a way, it's like going back home, back to your childhood."

When Carlos Barahona unpacks his suitcase in South Africa, out will come a giant Honduran flag, which he drapes around his shoulders. When Honduras scores, he waves the flag and sings the national anthem. The rest of the time, the Sarasota, Florida, resident says, he's possessed: "I can't sit. I'm jumping up and down, screaming." He got so excited when Honduras beat Mexico at a qualifying game for the 1998 World Cup that he ripped the seams of his pants with his bare hands and then danced at a disco until 9 a.m.

Unlike Argentina's 15 World Cup appearances, this will only be Honduras's second. Barahona was just 20 in 1982, when underdog Honduras tied mighty host-country Spain and favored Northern Ireland, then lost 1–0 to Yugoslavia in the first round. Barahona, now 48, doesn't want to wait another 28 years to see for himself if Los Catrachos can be among the surprises in South Africa.

"Soccer is my number-one obsession," says the maintenance supervisor for a five-star restaurant. He has a collection of ticket stubs from the Honduras games he's attended. "I went to Mexico, El Salvador, Costa Rica, and Chicago for the qualifying," says Barahona. "This is a continuation of the journey."

He grew up in San Pedro Sula, following the pro team, Marathón. "We played soccer every day, no matter what. It was as essential as eating," he says. He later played professionally for Marathón before moving to the United States in 1980. After he broke his toe, he retired, and now coaches in an over-45 league.

"A love of soccer is something that is deep inside me," he says. "When Honduras plays, it comes out. It comes out very loud."