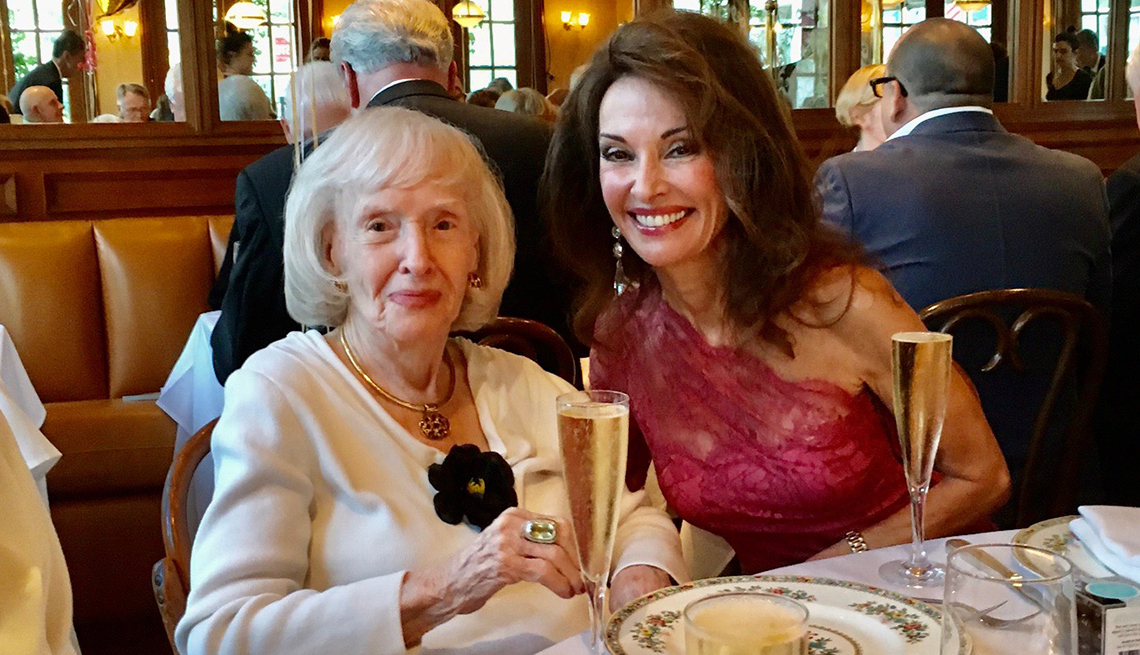 Susan Lucci with her mother, Jeanette, celebrating her 100th birthday.

En español | Susan Lucci's mother, Jeanette, remains a blessing at age 103. She's unfazed by coronavirus talk, taking the lockdown in her South Florida assisted living community in stride and embracing regular video visits with her daughter and son-in-law with a smile.

Her attitude and resilience are a consolation to Lucci, the Emmy-winning actress famous for her 41-year stint as the iconic Erica Kane on ABC's hit daytime drama All My Children. In normal times, Lucci, an only daughter, would make frequent trips from New York so they could spend time together.

The two have always been close, Lucci said, though they've had their moments, as mothers and daughters do. They'd watch early episodes of All My Children and laugh together knowingly when a 15-year-old Erica went at it with her mother, Mona.

Susan Lucci will join an AARP tele-town hall on Thursday, May 21, at 1 p.m. about caring for loved ones in long-term care facilities during the pandemic. Join the conversation with Lucci and AARP CEO Jo Ann Jenkins by calling toll-free 855-274-9507.

To protect her mother's privacy, Lucci, 73, won't identify where Jeanette lives. But her experience has been positive, and Lucci is happy to sing the facility's praises, especially in light of the pandemic: the transparency of email updates; the vigilance with which the health of staff is monitored (temperatures taken daily); the seamless introduction of virtual visits, which she and her husband never had to request.

The head physician and nurses remain accessible. Only one person, a staff member, tested positive for the coronavirus but has not been there for more than two weeks, Lucci said. She knows her experience doesn't reflect the experiences of everyone with loved ones in long-term care. “We're hearing some terrible things,” she said. “But mine has been the opposite, and I think it's good to know that the opposite exists."

Jeanette, whom Lucci described as “beautiful” and “spunky,” was an operating room nurse who became a stay-at-home mom once she had children. She threw herself into charitable work in their Long Island community and taught her two kids (Lucci's older brother passed away in January) about giving back by example.

Lucci's father died in 2002, and Jeanette lived on her own until age 98. “I never wanted to be the daughter or the child who dragged my mother out of her home kicking and screaming to assisted living,” Lucci said. Fortunately, it never came to that.

The pandemic’s death toll in long-term care facilities is surging toward 30,000, accounting for roughly a third of COVID-19 deaths in the United States. AARP is advocating for more transparency from nursing homes, for requiring the facilities to support tele-visits with loved ones, and against legal immunity for those facilities. 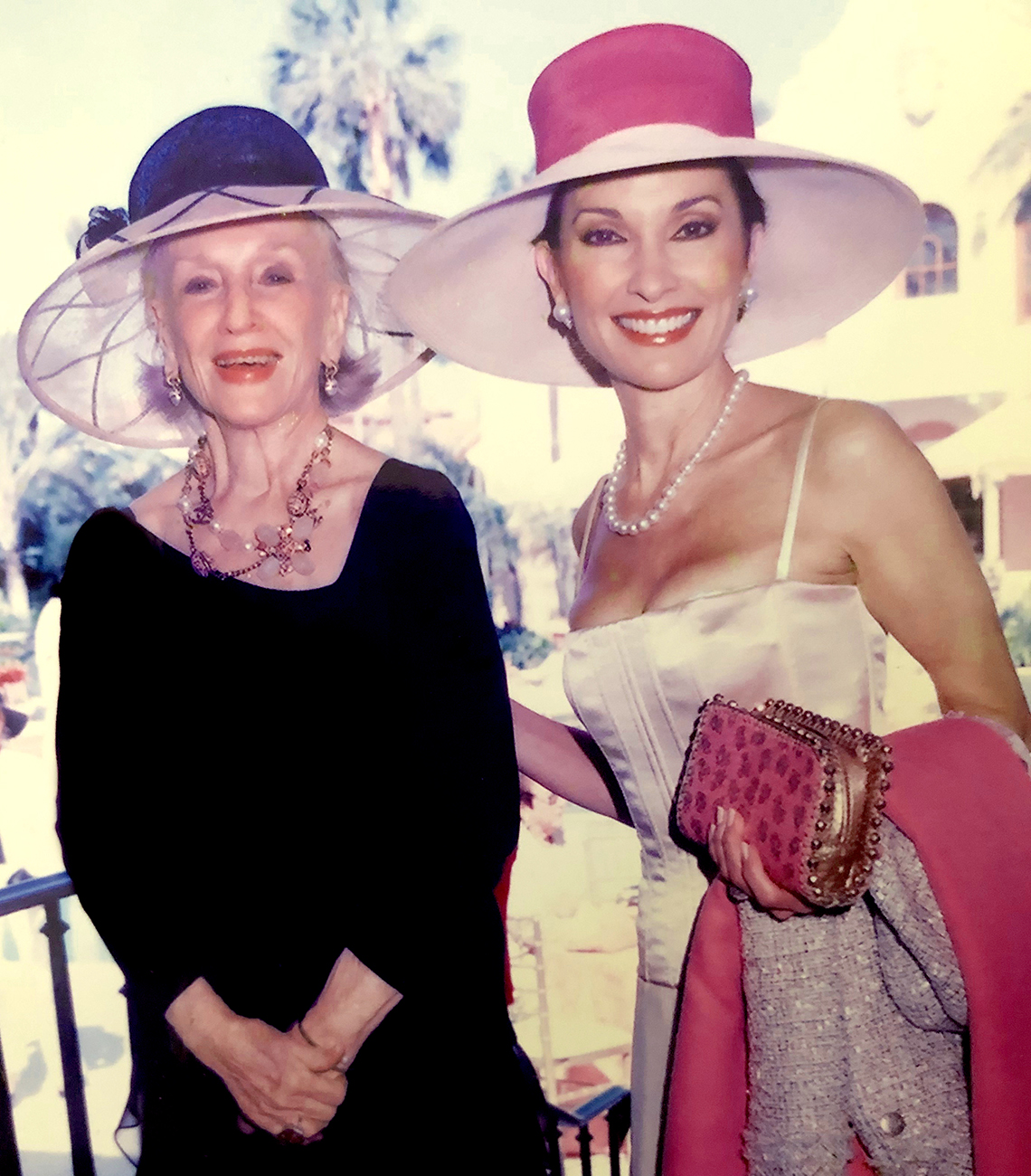 Susan Lucci with her mother, Jeanette

While living independently, her mother broke the same hip twice. The first time, she recovered fully and quickly, a feat Jeanette attributed “to growing up in the Pocono Mountains in Pennsylvania and drinking a lot of milk,” Lucci said. The butter pecan ice cream she ate straight out of the container, Lucci added with a laugh, also may have helped.

The second break didn't heal as well, and Jeanette had to start using a walker. That hardly slowed her down. During visits from Lucci and often her husband, Jeanette would venture out in her leopard kitten heels for shopping trips, long lunches and live jazz over dinner at her favorite Palm Beach restaurant.

The family hired people to help look after her, but Jeanette balked. “She fired everyone,” Lucci said. “She wanted to do everything herself."

The one exception turned out to be “a godsend,” Lucci said: a geriatric nurse who happened to be the daughter of one of Jeanette's friends. She gained Jeanette's trust and eventually recommended the perfect assisted living community, one rich with music and performances.

The transition proved an adjustment. At the beginning, Lucci checked in daily. Sometimes her phone calls were simple reminders to turn on The Voice (Jeanette had a thing for Blake Shelton) or flip to Dancing with the Stars, another favorite, on which Lucci appeared in 2008.

But it didn't take long for the community to feel like home. Until Lucci and her husband can be with her mother in person, they're grateful for what they have, including the virtual visits by video that allow them to see her and feel reassured by her sweet smile.

"She's not as sharp as a tack as she used to be, and that's OK at 103,” Lucci said. “But she is still present and remembers us. ... She has not forgotten us or forgotten our relationships, so she's happy.”