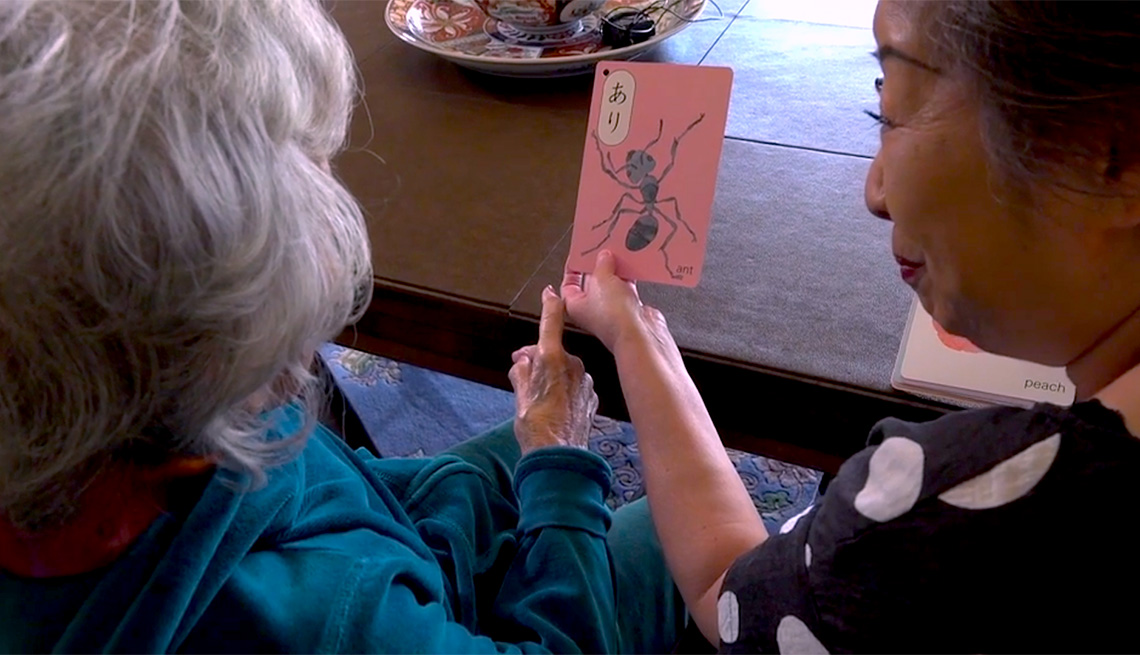 A caregiver, right, for Dorothy Toy, who became famous in the 1930s as half of an Asian American dance team, shows the then-101-year-old woman flashcards to help her memory.

More than 40 million family caregivers in the U.S. provide unpaid support to those with chronic, disabling or otherwise serious health conditions.

"Journalists are caregivers and storytellers. They also have a vast communication channel to reach audiences,” says Daphne Kwok, AARP vice president of multicultural leadership for the Asian American and Pacific Islander audience. “AARP and AAJA want to identify and amplify the Asian American and Pacific Islander caregiving stories that either are personal or other people's stories.

"Through the AARP-AAJA Caregiving contest, AARP wants to be a catalyst to have AAPIs identify as caregivers, to prepare to care for their loved ones and to know that AARP is a trusted source of information for caregivers," she says.

Winners received a monetary prize and a trip to the Asian American Journalists Association convention in Atlanta.

Watch the video below:

Chris Lee's* personal essay, “Self-Care for the Secret Caregiver,” details her private struggle to tend to her mother as she battles cancer. Read the full essay here.

Colleen Cummins’ photo series “The Caregiver” chronicles the daily life of Mary McGinnis and her grandson Alex Acuna, who suffers from chromosomal microduplication and severe allergies. McGinnis has been his primary caregiver since he was an infant and is a fierce supporter of rights for people with disabilities.

View selections from the photo essay below:

* Chris Lee is a pseudonym.

Editor's note: This story, originally published July 25, 2019, was updated to reflect the death of Dorothy Toy.