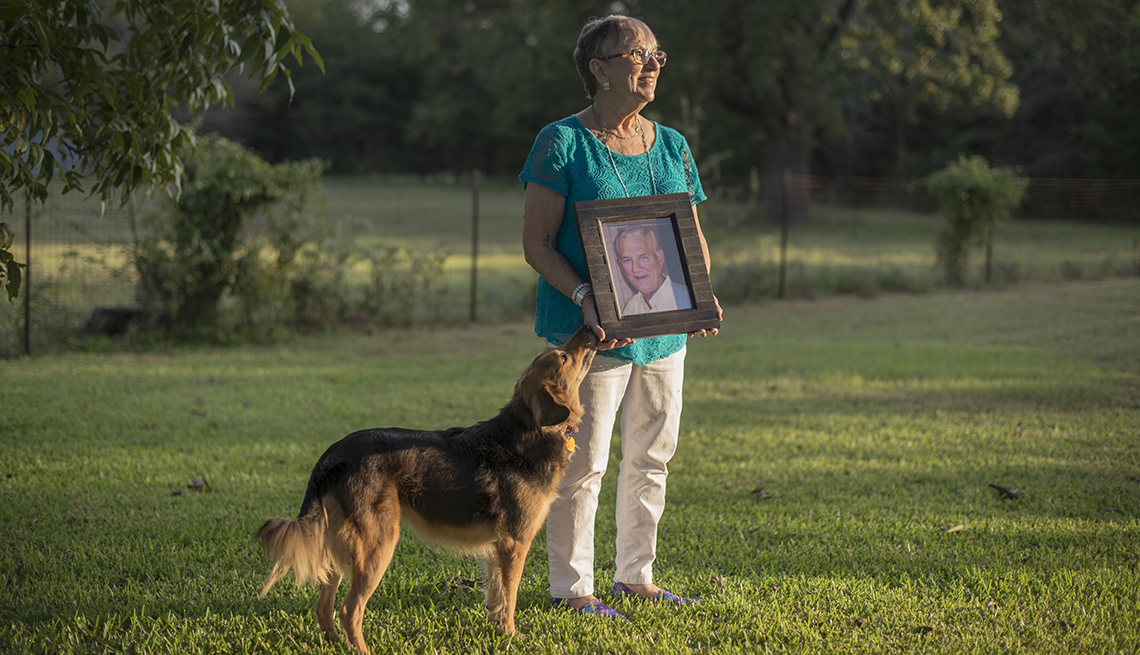 Rita Scott holds a photo of her husband, Gerald.

En español | Almost every night for 13 years, Sylvia Brown slept by her ailing mother’s side. Then suddenly, she was alone.

Brown had been the primary caregiver to Johnnie Mae, paralyzed on her right side from a 2003 stroke. They shared a bedroom in their Detroit condo by choice — Brown wanted to be close enough to hear her mom’s breathing. That lasted until two years ago, when Johnnie Mae died at 81.

Some nights still, Brown, 65, awakens and imagines Johnnie Mae sleeping next to her. During the day, Brown remembers the tasks that consumed so many hours of each day for so many years. She would prepare meals, get Mom situated in her chair, make sure the important items — the TV remote, her Bible — were within arm’s reach. With Johnnie Mae’s passing, “it’s like a huge hole, or vacancy, or void in your life,” says Brown, “because the feeling is, Now what?”

Now what, indeed. Caring for another adult — as about 40 million U.S. adults do, according to a recent AARP Public Policy Institute report — can be demanding to the point that caregivers put much of their own lives on hold. When those duties suddenly end, the caregiver is left not only grieving but also processing new emotions about their own station in life.

“Some find they’re not quite sure what to do with themselves because their reason for getting up in the morning, their all-consuming job, has now ended,” says Ruth Drew, director of information and support services for the Alzheimer’s Association. “Some people tell me that for the first six months to a year they’re just finding their bearings, and it takes awhile to feel like themselves again.”

AARP talked with several former caregivers about the struggles they faced in this major life transition. Here are some lessons they learned.

It may sound obvious, but it is also essential: Stay busy to fight loneliness and depression. Find that thing that gives you purpose. “With me, traveling is it,” says Brown, a chief clinical officer for the Detroit Area Agency on Aging. Brown had been able to take her mother on trips, and even without her, she continues to pursue that passion. She jumps on planes for excursions to Las Vegas, New Orleans, Florida, Jamaica and Cuba; a trip to Nigeria with a coworker is in the works. “As they say, life goes on, and so I cannot just go and bury my head in the sand because I have hopefully a few more years, so you fill that with things to do.”

Jeannie Moloo, 57, found relief in writing. “I was almost a cortisol junkie, or adrenaline junkie,” says the nutrition lecturer at California State University, Sacramento. That was life caring for her ailing husband, Nasir, while raising three children. “It was just run from one thing to the next to the next to the next. When you live that way, you don’t have to process a lot of emotions because you’re just running around, putting out fires.”

Moloo is now writing a book about her husband’s 12-year battle with chronic lymphocytic leukemia (he died in 2014), its impact on her family and what she learned. “We had promised each other — and this is going to make me cry — that we would take this experience so that we could make something out of it to help others,” she says, “because we went through so much.”

The range of emotions that emerge after the death of a loved one can take caregivers by surprise, says C. Grace Whiting, CEO and president of the National Alliance for Caregiving. Sadness is common, of course, but so are frustration and anger. And guilt. Ex-caregivers often feel a sense of relief that their difficult duties are over. And then they feel shame about feeling that way.

For 18 months, Rita Scott, of Terrell, Texas, rarely left her husband’s side as his health failed from diabetes complications. Since Gerald’s death in 2015 at 71, Scott has had to sort out complex feelings. She felt relief “as a result of knowing Gerald didn’t want to live in the condition he was in.” She felt some relief for herself, too. “The physical and emotional toll was great, brought about by months of lack of sleep and caring for Gerald’s needs. I also experienced guilt because I wasn’t actually in the room and by his side when he died.”

Scott, 75, relied on a close friend, a support group and her faith to guide her. Writing in a journal also helped. She even wrote a letter to Gerald, telling him her regrets. Then, in a gesture to release her guilt, she ripped it up.

The hard part may come later

Scott knew that the first year would be tough. She didn’t expect that the second year after caregiving would be tougher. “You kind of think that something magical will happen at the end of that first year,” Scott says. “You think, I’ve been through all the firsts and so, OK, now suck it up and get on with life. But that doesn’t happen.”

At least in the months after Gerald’s passing, she could immerse herself in managing family business matters and ensuring that holidays weren’t too painful for their three children and 16 grandchildren. Then reality set in: “This is your new life. There’s no going back.”

As a “supporting actress” to Gerald during their 53-year marriage, Scott wasn’t used to making friends by herself. So she found a new church where people could see her as Rita, not Gerald’s wife. “I didn’t know who I was for a while, but then I determined I am still worthy of friendships and of life,” she says. “And I was determined if anything was going to happen, I was going to have to make it happen. One of the hardest things I ever did was to walk through those doors to a different church for the first time alone, but I knew I had to do it.” 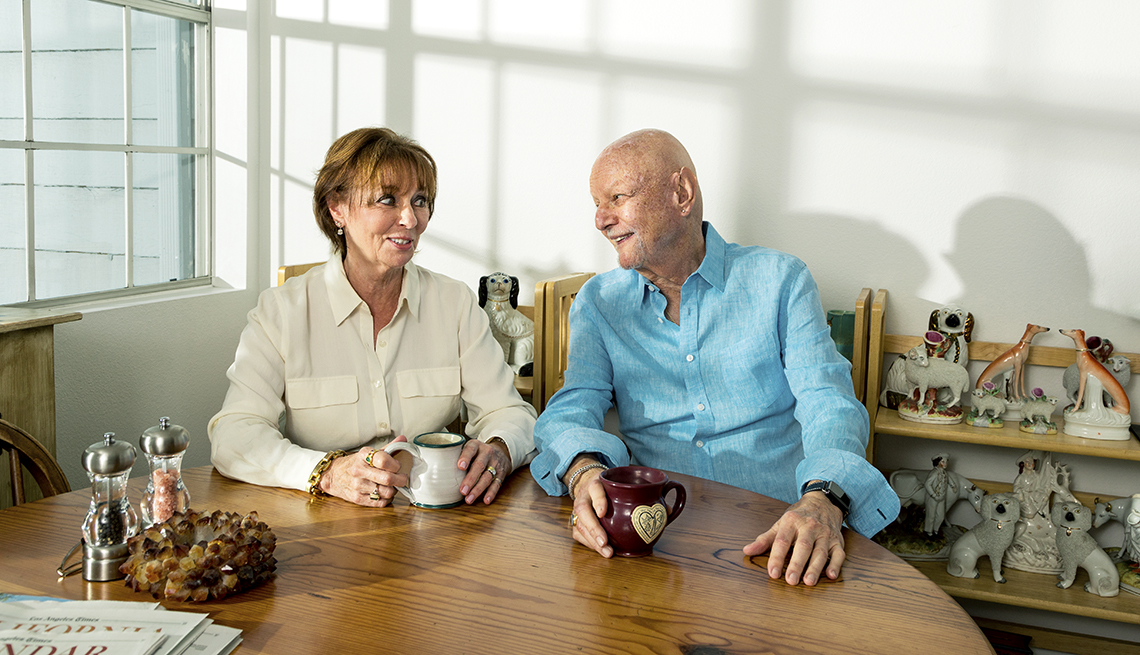 Put off the big things

When caregiving ends, other major life changes, such as selling a house or remarrying, should be delayed for a while, advises Drew of the Alzheimer’s Association. Exhaustion and grief can cloud decisions.

“Give yourself time to go through everything you go through the first year, and then think about the changes you might want to make,” Drew says. “I would counsel people to move slowly.”

Moloo can relate. “Initially, after my husband died, I wanted to run from everything,” she says. “Sell our house, uproot the children and move to another area altogether, thinking I’d get us away from the suffering and loss with a fresh start. I’m glad I didn’t. Keeping with our family routines, in the comfort of our home where my husband lived with us, has provided solace for my family these past few years.”

It is OK to move on

As couples sometimes do, Mel and Barbara Schwimmer would talk about how each would manage if the other died first. They both agreed they’d find a way to get on with life without the other.

After Barbara was diagnosed with Alzheimer’s disease in her early 60s, Mel cared for her for a decade at home — feeding, bathing and dressing his wife, dispensing her medication and calming her panic attacks. She eventually entered a memory care facility. Schwimmer, 85, couldn’t have predicted that the illness that took Barbara last year would connect him to his next chapter. He met Elizabeth Lees, 69, whose spouse also died of the disease, in an Alzheimer’s support group.

Initially, Schwimmer and Lees shared their grief, then friendship, and now a new chapter that he calls “storybook.” They travel, dine out and go dancing to her rock ’n’ roll or his jazz. Together they enjoy activities that they couldn’t do while caring for their spouses. “I would have never thought it would happen, and it did,” Schwimmer says. “You can love a person forever, and when that person is no longer here, you still have room in your heart for somebody else.”