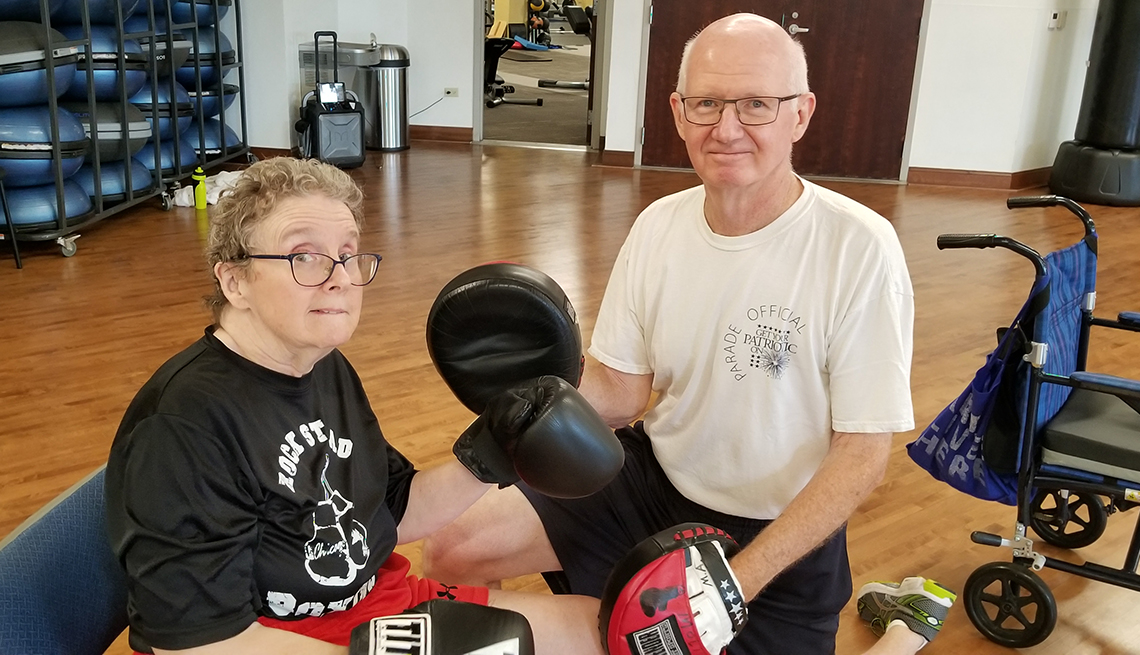 En español | Andrée Jannette, of West Chester, Pennsylvania, knows the feeling of being in a hospital and desperate to let nurses and doctors know — before anything else — that she has Parkinson's disease.

She was diagnosed with the neurodegenerative brain disorder in 2007 and has read the research showing that 3 out of 4 people hospitalized with Parkinson's do not receive medications on time. She's had to be her own advocate in situations such as when a bad fall landed her in the emergency room.

"Sometimes people will think that you're drunk or have had a stroke or something,” she says of the outward signs of the disease — such as stiffness, tremors and difficulty speaking.

That's why she wears a medical ID bracelet and keeps a Parkinson's Foundation Aware in Care hospitalization kit in her purse with extra doses of her medicines and vital information about Parkinson's disease.

About 1 million people in the United States have Parkinson's. Neurologist Michael Okun, medical director for the Parkinson's Foundation and chair of neurology at University of Florida Health, says it is the fastest-growing neurological disorder in the world. One of the things that's most troubling for patients, Okun says, is communicating their needs when they're admitted to the hospital. 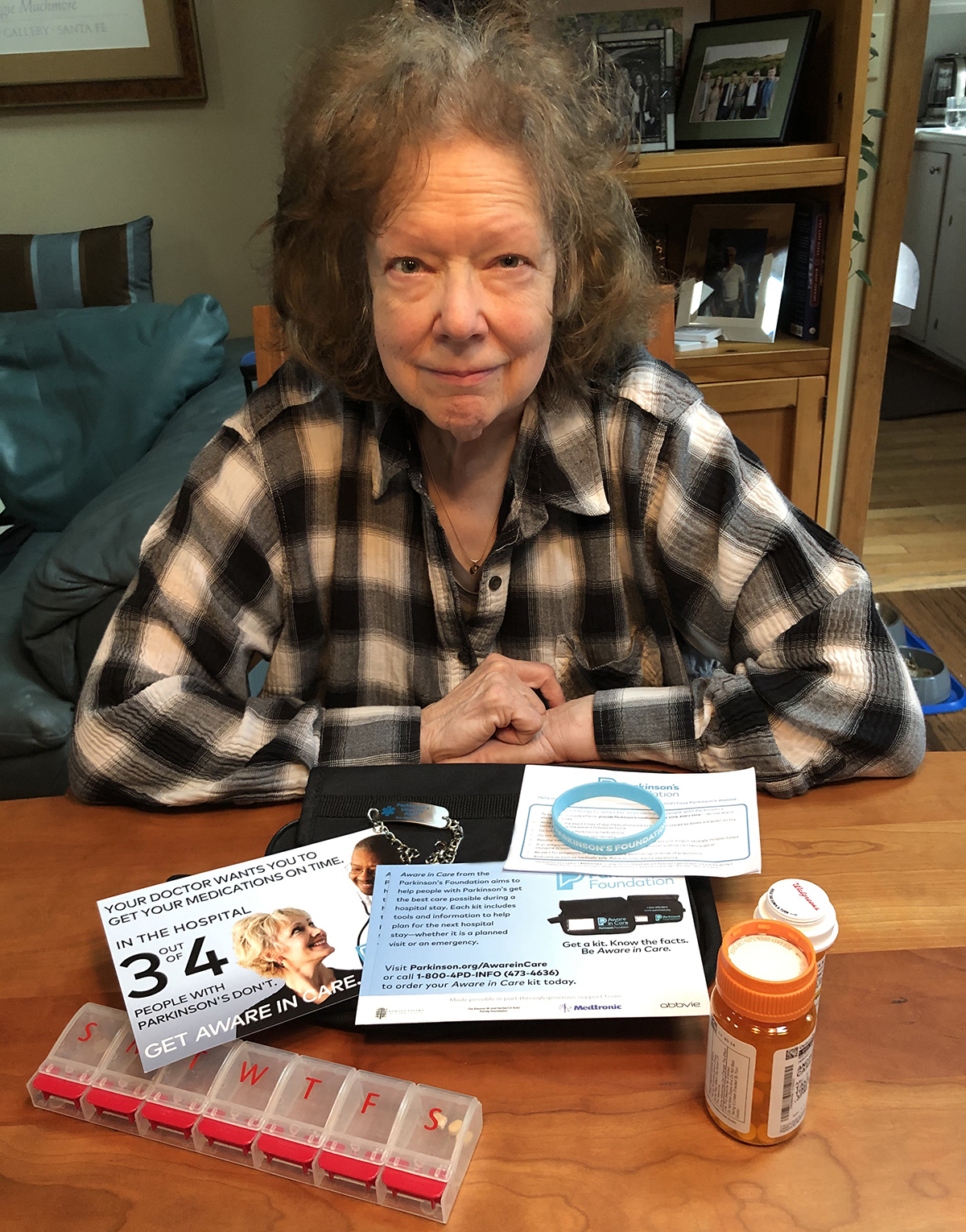 Andrée Jannette with her Aware in Care kit

For years, Okun ran the foundation's “Ask the Doctor” forum, and he continues to weigh in on the online forum “PD Conversations,” where he keeps hearing the same stories.

"One of the common themes is that the nurses, the staff at the hospital, however well-meaning they were, they were not prepared to take care of the Parkinson patient,” he says. “They didn't have appreciation for the importance of getting medicines on time, every time. They didn't have appreciation that certain commonly used medications in hospitals can actually harm a person with Parkinson's” because of potential complications.

Parkinson's Foundation research shows that 2 out of 3 people with Parkinson's experience unnecessary complications related to not getting their medications on time when hospitalized. These includes falls, confusion and longer hospital stays.

Okun and his colleagues continue their research on the topic and are dedicated to help solve this nationwide issue within hospital systems.

"We now have some ground truths that we can share,” he says, “and those ground truths went into making the Aware in Care hospitalization kit.” Since 2011, the Parkinson's Foundation has distributed more than 100,000 free kits that include a Parkinson's disease ID bracelet, a medic alert card, medication forms to fill out and fact sheets with information on the disease for caregiving teams.

The kit has brought results. According to the Parkinson's Foundation, 80 percent of kit users felt comfortable educating hospital staff about their Parkinson's needs, and they were twice as likely to receive their medications on time.

Tom Manak, in Glen Ellyn, Illinois, keeps everything in his hospitalization kit, including medications in their original bottles and cellphone numbers for doctors. He is the full-time caregiver for his wife, Ro, who was diagnosed with Parkinson's 30 years ago.

"She's really what you'd call a complex patient,” Manak says. She's had complications from deep-brain stimulation surgery that caused a hemorrhagic stroke. She's dealt with a major staph infection, is in a wheelchair and has started to develop dementia.

Manak blends her medicines into lemonade or iced tea that Ro gets every hour. He knows that if Ro has an unexpected hospital visit, her specific medications are not in the typical pharmacy formulary. So he brings her doses with him when he can.

"If a Parkinson's patient isn't getting their meds on time, depending on the symptoms they're treating, their actions or ability to move may be limited,” he says. “So now, the nurse may be looking at them and think there's something else wrong, or they're not recovering properly or anything else, so length of stay can go up. And the last place you want to be is in a hospital at a time you don't have to — even before COVID-19."

Manak says his career in nonclinical health care administration has given him a leg up in communicating with clinicians.

"I have initials behind my name when I deal with people in hospitals,” he says. “It's called PITA, like the bread. Because I'm a pain in the ass."

Geriatric pharmacist Emily Peron, who teaches at the Virginia Commonwealth School of Pharmacy, doesn't mind PITAs at all. She appreciates them.

"The fact that we've still got medication errors in at least 20 percent of folks with Parkinson's disease when they're hospitalized — I think it speaks volumes that there's a lot of room for improvement” in hospital systems, she says.

"It's really scary,” she says. “The big thing that I notice is that you almost need a Parkinson's champion."

Annie Wallis, associate director of education for the Parkinson's Foundation, says more champions could go a long way to improving care for people like Ro Manak and Andrée Jannette.

"We want to make sure all people with Parkinson's and their loved ones understand this problem and are prepared ahead of a planned or emergency hospital visit,” she says.