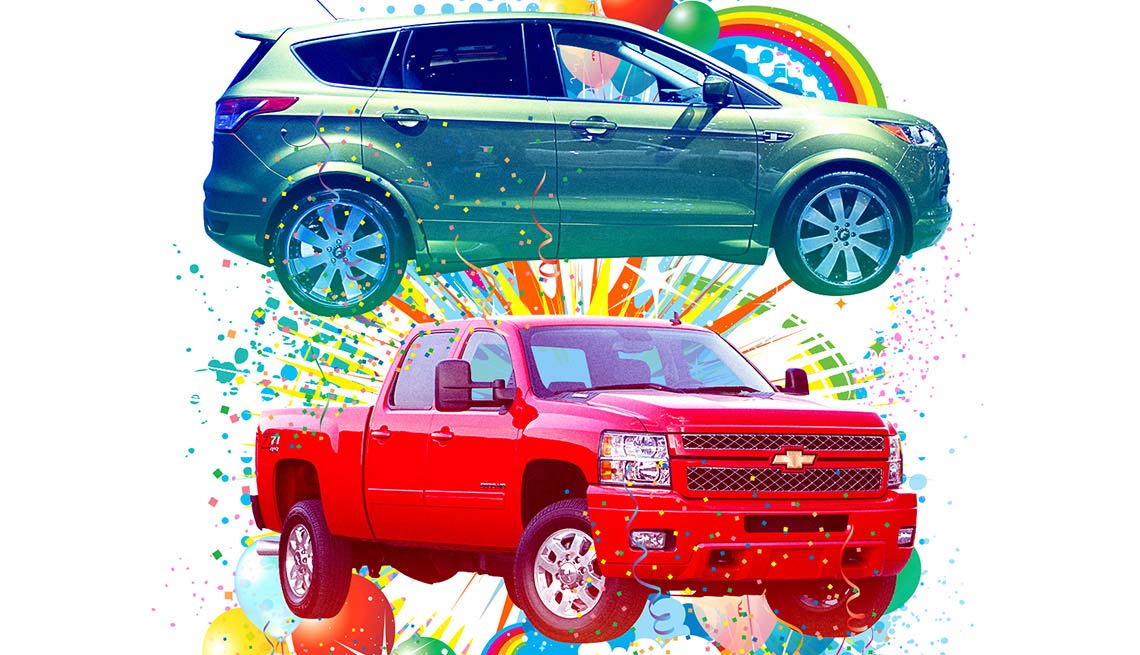 Car buyers over the age of 55 are now a critical segment for automakers.

When Sue Green drove off the lot in her new 2013 Hyundai Elantra, she was just glad to be out of her old high-mileage SUV; amenities like hands-free phone service and a touch-screen navigation system didn't really rev her up.

"But now when I get into a car that doesn't have these features, it feels weird," says Green, 51, a university professor from Tempe, Ariz. And she's loving the sporty compact's moonroof, hatchback and snazzy rims. "I was at the gas station the other day, and a kid who was about 20 said, 'Cool car!' "

Boomers like Green are leading a long-awaited rebound in car buying while making an enthusiastic market for the cars and technology that automakers thought they were aiming at 20-year-olds, industry analysts say.

New vehicle sales in 2013 posted the best rebound since the Great Recession, with consumers over age 50 setting the pace.

See what you can save with AARP Auto Buying Program

Top models selected by purchasers age 55 and older, from January to November 2013.

"The big news is that in the past five years, there's been a tremendous growth in the proportion of new-car buyers over age 55," says Jeremy Acevedo of Edmunds.com, the car-market research firm. "It's increased from 33 percent to 42 percent of sales. This is a critical segment for automakers."

Mature drivers also are bucking conventional wisdom about their taste in rides, accelerating purchases of pickups, utility vehicles and funky compacts once designed for the college crowd.

"You can no longer typecast the kind of cars you'd expect them to gravitate toward," says Chris Sutton, senior director of market research at J.D. Power and Associates automotive retail practice.

University of Michigan researchers said last year that boomers were increasingly likely to buy a new vehicle, even as new-car purchases slipped among lower age ranges. Those ages 55 to 64 represent the "peak probability" of a new-car purchase, analysts say, and their spending power is robust: Acevedo noted that the top 10 models chosen by purchasers over age 55 are selling for an average of $29,253 — 5.1 percent higher than the $27,831 average of the top 10 sellers overall.

According to Edmunds, smaller SUVs, pickups and compact sedans are hot growth areas for the age group.

"This generation really sees autos not only as providing freedom, but as an expression of their personality and who they are," says Bob Zeinstra, the national advertising and strategic planning manager for Toyota Motor Sales U.S.A. "For them, cars are not just a utilitarian machine. They are a part of who they are."

Sales reps say some boomers, motivated by fuel-mileage and environmental concerns — or just the desire for fun wheels — even seek out hip subcompacts.

"I sell the heck out of the Kia Souls, and our average buyer for those is 55 years old," says Bill Hawkesworth, online sales manager for Camelback Hyundai Kia in Phoenix. "They sit up a bit higher in traffic, and with the hatch, it's easy to throw things in the back."

Ford Motor Co. is making vehicles like its SUV crossover Escape more convenient in response to demand from older consumers — many of whom spring for the high-end Titanium trim level.

"We are seeing some of the customers stepping down [from a larger or premium vehicle] to the Escape," says Imran Jalal, Ford Escape brand manager. He says features like the foot-activated hatch appeal to mature buyers. Future models will include a 10-way power passenger seat and perpendicular parking assist, he says.

Cargo space was a reason Karen and Michael Hiatt of O'Fallon, Mo., switched from a Camry sedan to a 2013 Toyota RAV4.

"It handles beautifully, and the bells and whistles are great," says Karen Hiatt, 49. She says she wanted "at least one vehicle now that has all the fun stuff."

Melissa Preddy is a Michigan-based freelance writer who covers the auto industry.