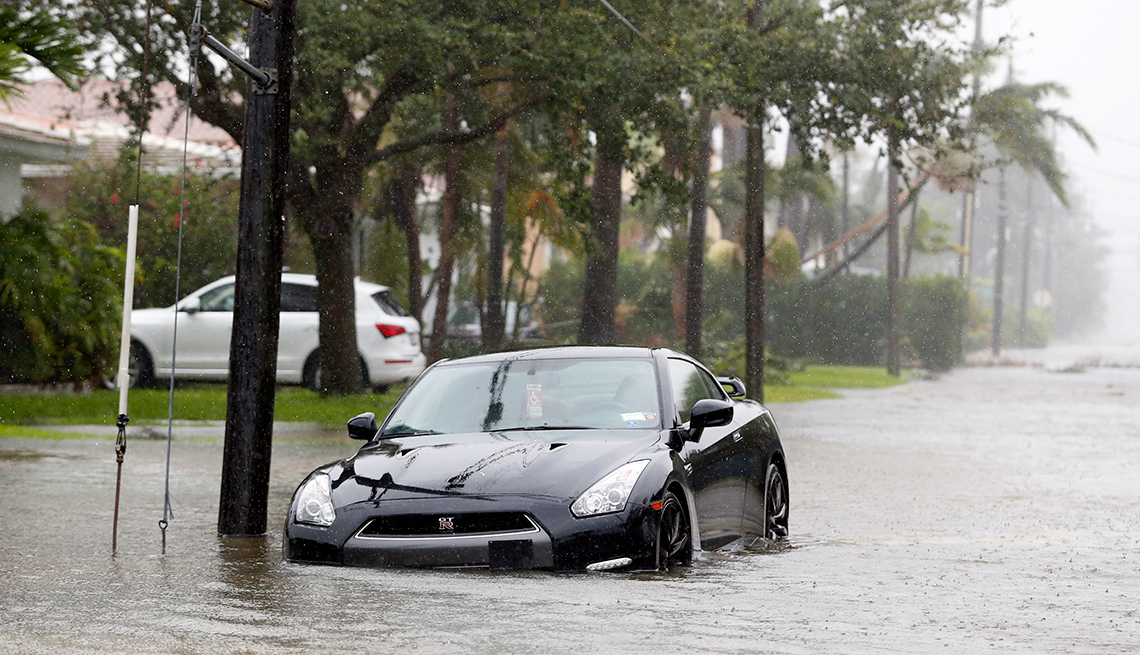 In the wake of recent storms and flooding, buyers should be wary of storm-damaged used cars for sale.

En español | Hurricanes and storms have not only destroyed homes and businesses, they also damaged hundreds of thousands of vehicles.

People who own the flooded vehicles almost surely can’t drive them without performing major repairs. And people who unwittingly buy them in the aftermath are likely to have safety and reliability problems.

AARP Membership: Get exclusive information, benefits and discounts for just $16 a year

As Consumer Reports cautions: “Water can ruin electronics, lubricants, and mechanical systems. It can take months or years for corrosion to find its way to the car's vital electronics, including airbag controllers. Consumers need to carefully inspect (or pay their mechanic to do it) any used car before buying one.”

Those who own a flooded vehicle can try to rescue it, and used car buyers should take steps to prevent unknowingly buying a car that’s been flooded. Both are significant challenges. Here’s how to meet them.

Water quickly damages the electrical components, meaning the cars “may no longer be safe or roadworthy,” warns the government’s National Motor Vehicle Title Information System. So, get it out of the water ASAP. The longer it sits, the worse the damage.

Open the doors, hood and trunk to air it out and see how much of a challenge you face. You may decide to surrender right there and hope the insurance adjuster calls it a total loss. If undaunted, unhook the battery. That’ll help preserve any of the electronics not already short-circuited into ruin by the flood water. Expect to remove carpet and seats. Check the engine oil and transmission dipsticks. Any water drops mean you must change the oils and fluids before trying to start or use the car.

If you have a good mechanic, or you’re handy enough to clean and fix the mess, you might have to fight with your insurance company to keep it insured.

“The auto insurers want to be sure they are insuring a vehicle that’s safe for the driver and occupants,” and one that’s been in a flood might not qualify because of possible damage to safety systems, says Michael Barry, vice president at the Insurance Information Institute (III), a trade group.

Heavily water-damaged vehicles are supposed to be written off as total losses by insurers, who pay the owners, take ownership of the totaled cars and list them as salvage vehicles in state registration records. Then the machines are sold through auction companies for dismantling by scrap yards, or intact to people aware of the flood damage and nevertheless want to attempt repairs.

“Some people can buy them, fix them up and have a pretty nice ride. But there’s no secret” the cars have been in a flood, says Frank Scafidi, spokesman at the National Insurance Crime Bureau (NICB). “The key word here is disclosure,” he says.

Some ruined cars are uninsured, leaving the owners desperate to raise cash for replacement cars via a quick cleanup and resale, omitting mention of flood damage.

“The people who stand to lose the most financially might consider behavior they otherwise might not,” Scafidi says.

“A car that was a total loss can get cleaned up by, really, a criminal and sold in some other state” that has less-strict regulations about what constitutes a totaled, or salvage, vehicle, according to Barry. And that other state might be distant from the flood area, where flood damage doesn't top buyers’ concerns.

Or, Scafidi says, a vehicle might be what’s called an “owner-retained” total loss. The owner keeps the car and accepts a lower payment from the insurance company. That happens when a classic car is involved, or one that has special meaning to the owner, according to Scafidi. But if those keepsake cars later are sold without mention of flood damage, the potential for safety and reliability problems are just as bad as if the buyers were victims of nefarious schemers.

Consider, is the deal too good to be true?

“If you’re shopping for a used vehicle and know what the value of that should be, and you find one that’s well below that, the hairs on your neck should stand on end,” cautions Scafidi. “Take somebody with you who really knows cars.”

Consult websites that help you check whether the vehicle has been listed as salvage or flood-damaged. Among the sites are those offered by the NMVTIS, NICB and CarFax. All have large databases, but none is definitive. If a vehicle identification number (VIN) doesn’t show up on the sites as belonging to a salvage, or totaled, car, it doesn’t guarantee the vehicle’s OK.

If the vehicle you’re considering isn’t listed as salvage, but you’re suspicious, do some simple checks.

Tedious, perhaps, but important to avoid big problems.  Says Barry: "In my experience, if a car is flooded, it's a long way toward a total loss."