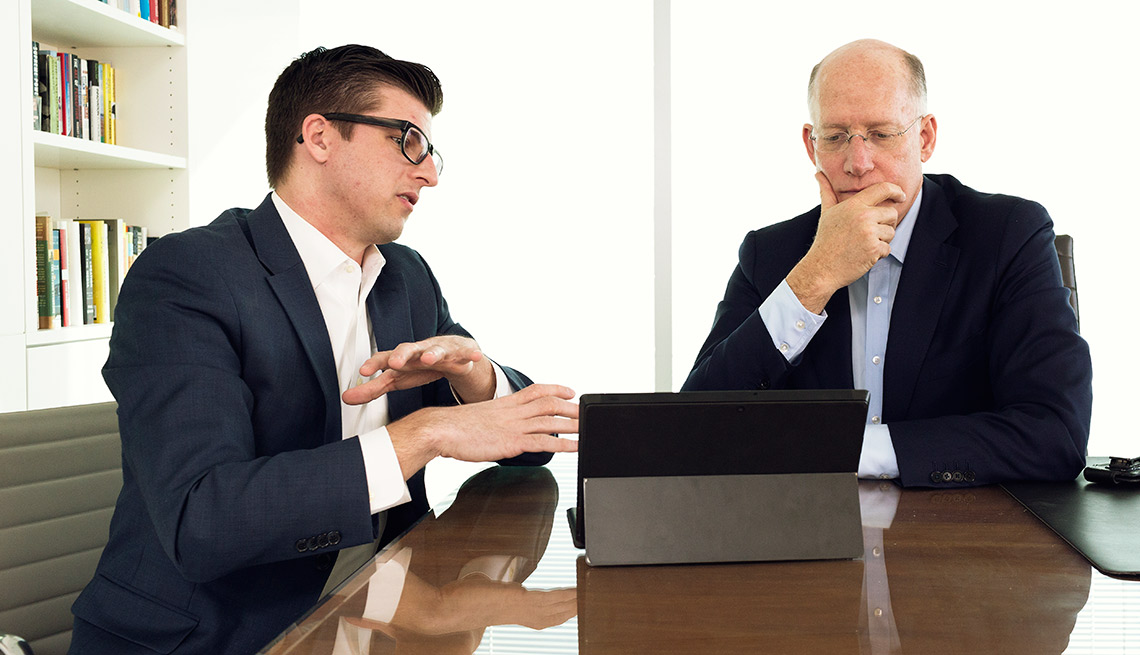 En español | Don Baer, the 60-year-old chairman and CEO of one of the world's largest public relations companies, has had plenty of mentors. His latest is half his age.

The Burson-Marsteller executive says he and a junior colleague spend their mentoring sessions discussing everything from what's new in social media and ways it can be used to spread clients' messages to how to take a selfie with Baer's iPhone.

Baer is such a believer in the benefits of having a young mentor that he has urged some other Burson-Marsteller managers in the 2,500-person global firm to find one, too.

"A lot of this was to help those of us who didn't grow up in the digital and social media environment to understand better what was going on," he says.

The Burson-Marsteller experience is called reverse mentoring — younger staffers teaching those several rungs above them on the career ladder. Programs for reverse mentoring aren't widespread in the business world just yet, but expect to hear more about it as employers increasingly find themselves with a workforce spanning multiple generations.

Companies with large numbers of boomers and millennials see it as a way to bridge the generation gap and create a two-way exchange of knowledge, says Wendy Marcinkus Murphy, an associate professor of management at Babson College in Wellesley, Mass.

Indeed, both sides have lots to gain by flipping the traditional mentor-protégé relationship.

Junior staffers have a chance to showcase their leadership skills and get career-boosting access to senior managers. Older employees pick up new skills, hear a fresh perspective from the front line and can demonstrate that they are not so set in their ways that they can't embrace new ideas. "The ability to learn is probably the most critical skill that you can have in today's workplace," Murphy says.

At PricewaterhouseCoopers, which recruits many workers right out of college, a reverse mentoring program has been going on for more than three years at its offices in greater Atlanta. The program allows senior leaders at the multinational accounting firm to connect with millennials, who, in turn, can see their careers placed on the fast track, possibly making them more likely to stay, says Bob Eichenberg, head of human resources for that region.

Reverse mentoring has been around informally for many years. Jack Welch, the retired CEO of General Electric, often is recognized as having introduced a formal version to the U.S. corporate world in the late 1990s. Welch picked up the idea while overseas.

When he returned, within 48 hours everyone in the company was looking for a mentor, Welch told an interviewer. "We tipped the organization upside down."

Since then, other major companies have tried reverse mentoring, including Cisco, Procter & Gamble and The Hartford.

Years ago at GE, young mentors helped Welch and hundreds of other executives learn to navigate the Internet. Nowadays, mentors teach social media, such as how to use Twitter and Instagram or create a LinkedIn profile.

Reverse mentoring goes beyond technology lessons, though. It occurs in medicine and science, where new graduates are more aware of the latest research and advances, says Babson College's Murphy. And it has been used to match executives with mentors from a different background as part of diversity training.

Mentoring typically lasts from six months to two years. Sessions often are structured around certain topics, although they aren't so rigid that protégés and mentors can't veer off into other areas of interest.

AARP Foundation started Mentor Up in September 2013 to bring teens and young adults together with older generations so the latter can stay current and connected. Young volunteers mentor older people on everything from technology to health and fitness. Sometimes it's just being a friend. In last year's Love Letters campaign, nearly 74,000 young volunteers made more than 250,000 valentines that were delivered to older adults. Mentor Up, working with partners such as the National 4-H Council and DoSomething.org, has engaged more than 300,000 young people to reach out to more than 200,000 seniors.

Mentor Robert Fisch, a senior at Northwestern University, showed a protégé in his mid-70s last year how to set up the Bluetooth wireless in his car. "It was just nice to have a conversation with him," the 21-year-old says. "I felt like I was able to actually connect." Find out more at MentorUp.org. —EA

"When you are a 20-something and working with a senior leader, it helps to have the structure and the ability to go where the conversation goes," says Heather Serignese, 31, one of the first mentors when The Hartford launched a program in 2010.

Serignese mentored two senior-level protégés covering topics such as technology, devices, networking and the power of media. One mentee taught her about a Microsoft sharing platform, which he had used elsewhere but was new at The Hartford at the time.

Indeed, a successful mentorship is one in which learning becomes a two-way street, experts say.

That happened with Matt Kirk, 42, a senior vice president in sales and distribution at The Hartford, who underwent reverse mentoring more than two years ago. The Gen Xer says when he entered the workforce, email was just getting started and people still carried two-way pagers. His 20-something mentor got him up to speed on Twitter and turned him into a LinkedIn fan.

Kirk says he, in turn, was able to teach his mentor the limits of technology. No amount of texting, tweeting or posting can replace face-to-face meetings with customers when trying to build trust and a long-term business relationship, he says.

Of course, companies can't just throw a young employee and a senior executive together and expect things to work out.

Mentors at PricewaterhouseCoopers are carefully selected. They usually are in their early 20s and have been at the firm long enough to understand how it operates yet can bring up new ideas from a fresh perspective, Eichenberg says. And they must be confident and unintimidated enough to speak to superiors.

Busy executives also must make time for mentoring in order for it to work. And they must put themselves in the role of student. "That was a bit of a change for me," admits Kirk, who says he was accustomed to running meetings.

Mike Bergelson, CEO of Everwise, which provides cloud-based mentoring software, says one of the challenges of reverse mentoring is overcoming "face-saving" among senior executives.

"Often they may actually be open to the possibility of learning from a junior staff member but worry about the message that it might send to their peers," he says.

It also helps to have support from the very top for reverse mentoring to succeed. That's the case at Burson-Marsteller. CEO Baer says after hearing about reverse mentoring at a 2013 seminar, "I wanted a reverse mentor of my own." He hand-picked Patrick Kerley, the 32-year-old senior director of the company's social and digital media team.

Kerley says he had no qualms about mentoring the CEO. He makes sure, though, that he tests any new technology before presenting it to Baer, and that he's well prepped so he can answer any questions that come up. The pair meet monthly, sometimes more frequently.

"Don was very clear from the get-go if I spot something new and interesting that I think he should know about, I should pop in and share it with him," Kerley says.

It's not all tech talk. Baer says they discuss career matters and what's going on with the firm. "I have a better insight into what his thinking is of the PR industry and where it is headed," Kerley says.

With technology changing so quickly, it's likely that the need for reverse mentoring will only grow. Even Kerley keeps up with help from younger staffers.

"I have a team that is 10 years younger than I am," he says. "They often are bringing me the latest and greatest."