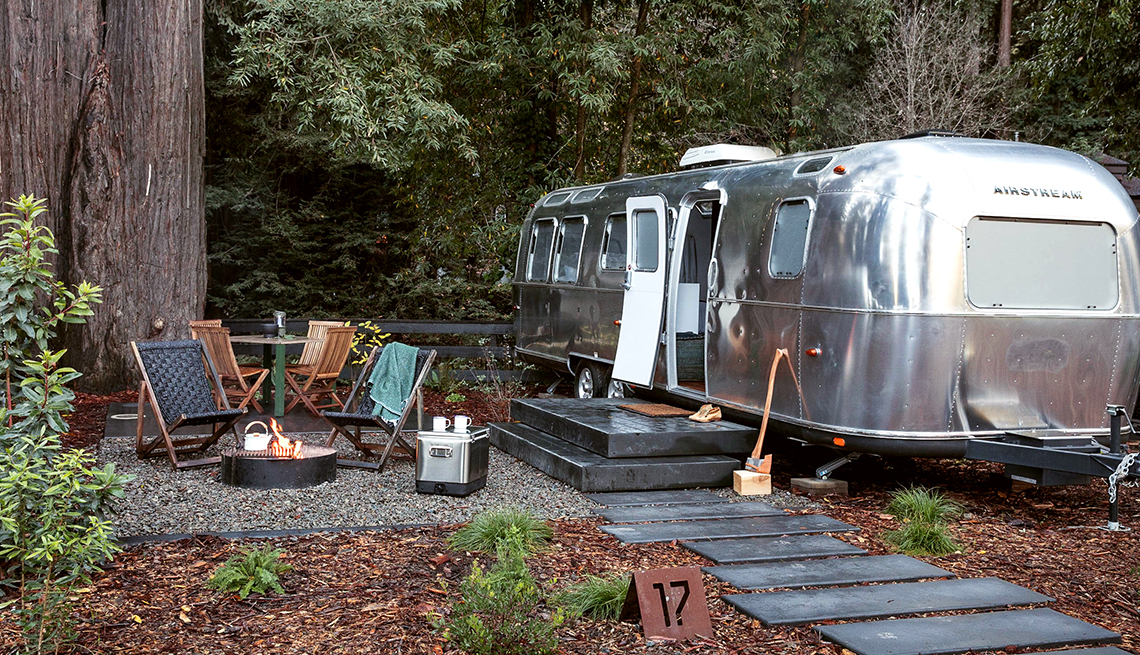 Glamping is an affordable way to take in the luxury of Sonoma County's Russian River Valley.

For many travelers, a trip to Northern California wine country is about indulgence. Days are spent sipping world-class wines and eating at Michelin-star restaurants, before calling it a night at one of the area's many expensive boutique hotels with luxury spas. But there's a more affordable way to get the feel of luxury in Sonoma County’s Russian River Valley, a stretch of wine country about 90 minutes north of San Francisco. It’s called glamping.

While curling up in the great outdoors sounds appealing in theory, the truth is it takes a lot of work. Camping requires hours of preparation, usually involves middle-of-the-night walks to the bathroom and ends with dirt in clothes, equipment and more.

Glamping, however, involves none of the above.

You don’t need sleeping bags or any other camping equipment. You simply arrive at AutoCamp Russian River, one of a number of glamping spots all around the Golden State. AutoCamp offers nearly two dozen custom Airstreams, permanently parked in a sleepy grove of redwood trees (at rates that range from $225 to $450 a night depending on the time of year and day of the week). Every silver trailer has a queen bed, heat, air conditioning and bathrooms that boast walk-in showers, toilet and sink.

Airstream glampers get a well-stocked kitchen, including a refrigerator and convection microwave oven, which makes cooking less than rustic and especially easy. And outside every Airstream there’s a private patio, a fire pit with grill top, and a table and chairs. It’s enough to almost make one feel guilty about opting for a restaurant dinner in downtown Guerneville, a three-minute drive away. Almost.

Guerneville’s main street is short and sweet. Tucked in between Dick Blomster’s, a retro Korean diner known for fried chicken, and a handful of other tasty eateries are shops, art galleries, the Guerneville 5 & 10, and a convenience store where one can find staples such as a bottle of wine.

Evening activities are available in the Clubhouse, AutoCamp’s take on a hotel lobby. The indoor fire pit glows, giving the open-air space a cozy feel. A small crowd of glampers may be chatting, checking email and generally relaxing in the cushy chairs scattered about, or playing board games like Scrabble.

At 10 p.m. the roaring outdoor communal campfire goes dark, but personal campfire pits outside the trailers — with complimentary roasting logs provided (AutoCamp is not allowed to burn wood) — are perfect for making s’mores.

If an Airstream isn’t rustic enough for you, during warmer months you can also rent a platform luxury tent with queen beds and electric blankets at AutoCamp (which has a second location in Santa Barbara, and a third opening near Yosemite National Park in February 2019). Bathrooms and showers are nearby in the Clubhouse.

Either way, you’ll spend a night in wine country under the stars, but not on the ground.

What Else to Do in the Russian River Valley

From hiking through redwoods to wine-tasting, swimming and spotting sea life, there’s plenty to keep you busy beyond glamping.

Drop in for a winery tour to see the historic wine cellars and history museum, before concluding with a tasting. Allow about an hour. Tours are complimentary and are offered numerous times a day. Reservations are not required.

Break a sweat, or enjoy a stroll: There’s a trail for everyone at Armstrong Redwoods State Natural Reserve. You can drive into the park, but there’s something special about walking into this majestic grove of ancient coast redwoods. Estimated at more than 1,400 years old, the Colonel Armstrong Tree is the oldest tree in the grove, named after the lumberman who preserved a portion of the park in the 19th century. The Parson Jones Tree is the tallest tree, topping more than 310 feet in height. Both trees are an easy walk from the park entrance. Armstrong Woods is open from 8 a.m. to one hour after sunset, seven days a week.

Visiting this pebbly beach in Guerneville is a tradition for many families. Sit in the sun and stare at the redwoods, then splash in the river when you need to cool off. An assortment of water toys, chairs and umbrellas is available for rent and, in true wine country fashion, the snack bar serves chilled wine and beer, in addition to hot dogs and burgers. Weather permitting, the beach is open on weekends mid-May through mid-June, and daily mid-June until early September, when weekend hours go back into effect.

Jenner is at the mouth of the Russian River on the Pacific Ocean, and harbor seal pups are the star attraction here from March through June. Pullouts along Highway 1 make it easy to view the rookery from above. If you want to stretch your legs, take a walk along Goat Rock Beach, but stay at least 300 feet from seals. (Wear layers. This is not a swimming beach.) Seal Watch volunteers are typically on duty at Goat Rock Beach during weekends from March through Labor Day. The Sonoma Coast Visitor Center in Jenner is operated by state park docents and open most days, year-round.